Have you ever wondered what it must have been like to have been a prince one thousand years ago? Would you have eaten off of silver plates? How many swords would you have had? Which horse would be your favourite, and which saint? Who would your friends be? Would you miss your grandmother? Which side would you be on in court intrigues? What kind of jewellery would you wear? We can answer some of these questions — at least in the case of one prince — from a document held in the British Library, dated 25 June 1014. 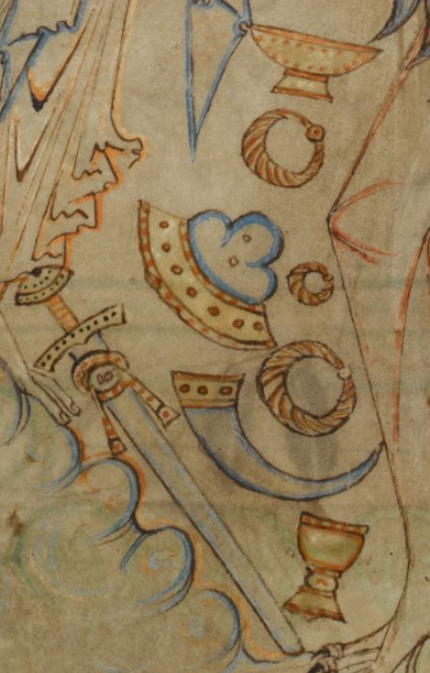 Detail of worldly treasures which match the items mentioned in Æthelstan’s will, from a Psalter made in Winchester, mid-11th century: Cotton MS Tiberius C VI, f. 10v

That document is the will of Æthelstan, the eldest son of King Æthelred ‘the Unready’ of England (d. 1016). Inconveniently, Æthelstan died in 1014, in the middle of an invasion by Scandinavian forces (vikings). Nevertheless, shortly before he died, Æthelstan had time to divide his possessions, giving us a glimpse into elite English society.

In Æthelstan’s will, he bequeathed some of his most precious possessions. These included extensive lands in 10 different shires, several horses, and various objects made out of precious metals. A full translation of the will is available online.

‘To my brother Edmund, the sword that King Offa had’: detail of Stowe Ch 37

The many swords described in Æthelstan’s will have attracted particular attention. Swords were some of the most expensive weapons available in early medieval Europe. Æthelstan’s will indicates how many and what kind of swords an early medieval war leader might have needed. Several of the swords are described as ‘ornamented’, ‘with a silver hilt’, or ‘damaged.’ There is a sword with ‘a silver hilt that Wulfric wrought’ and there is another 'on which a hand is marked.’ There was even one, Æthelstan claimed, that had belonged to Offa, the 8th-century king of Mercia. Æthelstan gave this sword and another with a ‘pitted hilt’, as well as many other things, to his brother Edmund, who became heir to the throne after he died. 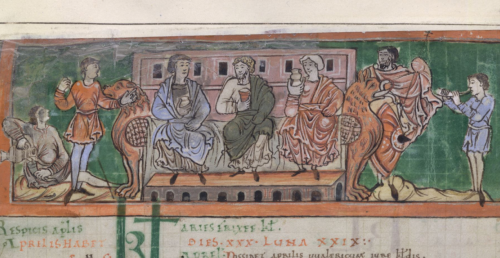 Detail of a feast, with a drinking horn being filled on the far left-hand side of the image, from a mid-11th -century calendar: Cotton MS Tiberius B V/1, f. 4v

Beyond the swords, shield and chainmail, other items mentioned in the will give us insights into Æthelstan’s domestic life. His mealtimes could be glittering affairs, literally: the will mentions a ‘silver cauldron/basin worth five pounds’, and possibly a silver bowl, in addition to a costly drinking horn. On special occasions, Æthelstan perhaps wore his 'golden belt' and arm-ring. He may have dined with his brothers and his ‘dish-then’ (steward or seneschal) Ælfmaer, who received a roan stallion and a damaged sword in the will. Æthelstan might also have shared meals with his retainers and allies including Æthelweard the Stammerer, Godwine the Driveller and Ælfric of Barton. Other members of Æthelstan’s entourage mentioned in the will include a priest, a ‘staghuntsman’ and, perhaps unsurprisingly, a ‘sword-furbisher.’ 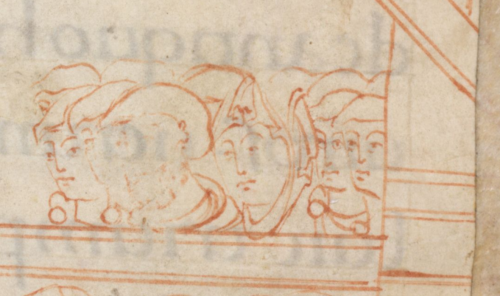 The will even offers glimpses of the prince’s childhood, since Æthelstan mentions two women who were important in his upbringing. The first was his foster mother, Ælfswith, to whom he gave land worth 250 mancuses of gold ‘because she greatly deserved it’. Royal and noble children in early medieval England were frequently sent to other families to be brought up or were cared for by foster mothers. The second major influence on Æthelstan’s childhood was apparently his grandmother, Ælfthryth (d. 999 x 1001), wife of King Edgar (d. 975) and mother of Æthelred: she ‘brought me [Æthelstan] up’, according to the text of the will. Indeed, the first time Æthelstan appeared in the surviving written record, he was listed with his grandmother as witnesses of a charter for Abingdon Abbey. Ælfthryth must have been an important influence on Æthelstan throughout his life. Many of the churches to which he made donations in his will she had also patronised, such as Ely Abbey. Touchingly, Ælfthryth is the last person mentioned in the will: Æthelstan asserts that all his gifts to God and God’s church are done for the soul of his father, his own soul and that of Ælfthryth.

Æthelstan’s will also records charitable donations he made for the sake of his soul at the end of his life. These pious donations offer stark reminders of how difficult life could be for those outside the elite in 11th-century England: the will makes provisions for 100 paupers to be fed on the feast day of St Æthelthryth of Ely and begins by freeing all of the penal slaves owned by Æthelstan. Penal slaves were people who were made slaves because they had been convicted of a crime. The will does not mention the hereditary slaves who worked on Æthelstan’s extensive estates or ran his household.

At least two copies of this will were made, for safekeeping, and were sent to Winchester and Christ Church Canterbury. The copies were written on the same piece of parchment, and the word ‘CYROGRAPHUM’ was written along the middle. The parchment was then divided along that word, so that the copies could be verified by lining up the two halves and matching the letters. Æthelstan perhaps took these precautions because he was anxious that the provisions might not be respected. Several times, he emphasized that these bequests were made with his father’s permission.

One copy of the will, the upper portion of the cyrograph, can be viewed on our Digitised Manuscripts site. You can also learn more about Æthelstan, Ælfrthryth and Æthelred at the Anglo-Saxon Kingdoms exhibition, which will be on display at the British Library between 19 October 2018 and 19 February 2019. Don't forget the prince who died over 1000 years ago, who loved swords, horses and his grandmother.

Posted by Ancient, Medieval, and Early Modern Manuscripts at 7:35 AM