The European conquest of the Canary Islands

Europe and the Sea, a new exhibition in Berlin, explores the fundamental role played by the sea in the history and development of Europe. On loan to the exhibition is a British Library manuscript describing an expedition by two French knights, Gadifer La Sale and Jean de Béthencourt, to conquer the Canary Islands in 1402. It contains the Conquête et les conquérants des Iles Canaries, a chronicle of the journey and exploration of the islands, as recorded by Pierre Boutier and Jehan le Verrier, military chaplains to the expedition. There are several surviving accounts, but Egerton MS 2709, dated to before 1420, is believed to be closest to the events, and may have been copied under the supervision of Gadifer himself for an important patron, perhaps the Duke of Burgundy. 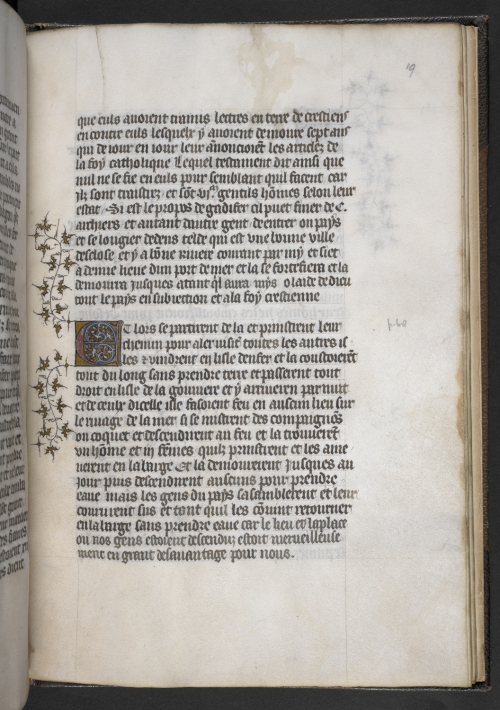 This chronicle describes several clashes with the local inhabitants. On the page shown above, Gadifer sailed around the islands and passed the ‘isle d’Enfer’ (meaning ‘Hell Island’, now called El Hierro), arriving at the ‘isle de la Goumere’ (La Goumera) at night. There the French sailors went ashore in a small boat and captured a man and three women who were making fires on the beach, bringing them back to the ship. The next morning they sent a party to find fresh water and, unsurprisingly, the local people attacked them and forced them to retreat. 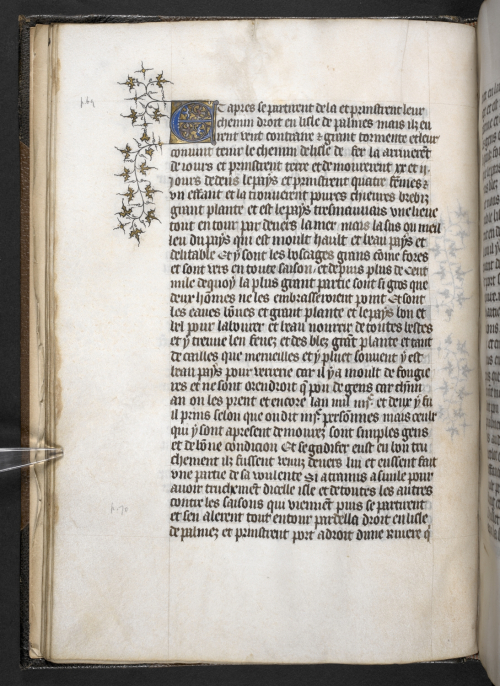 On the next page the adventurers set sail for Palma, but were driven ‘by a great storm’ back to El Hierro, where they stayed for three weeks. They discovered ‘great numbers of pigs, goats and sheep’ and, while the coast was rather barren, the interior was ‘fertile and pleasant’ with ‘more than a hundred thousand pine trees’ and an abundance of quails. By 1405, Lanzarote, Fuerteventura and El Hierro had been conquered, although the larger islands like Tenerife put up greater resistance. 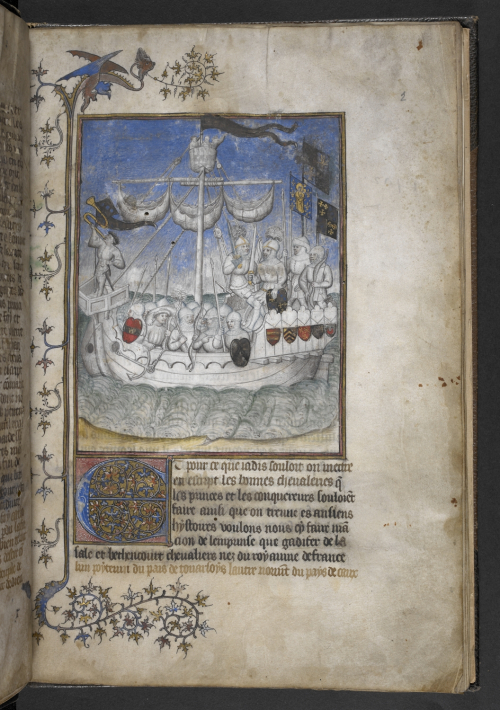 Knights sailing to conquer the Canaries, attributed to the Master of the Cité des Dames and workshop: Egerton MS 2709, f. 2r

On the first page of the manuscript is a striking image of a ship crowded with armed knights, with an elaborate initial and decorative border. The ship, which has been compared to a late Viking vessel in design, has flags at the masthead and at the prow and stern, as well as two shields bearing the arms of Gadifer La Sale, one of the French commanders. The arms of Jean de Béthencourt do not appear, but the arms on one of the flags at the stern have been partially erased, so it is possible that they were his. The illumination has been attributed to the Master of the Cité des Dames, who worked on some of the most beautiful manuscripts in the British Library's collections, including the Bedford Hours (Add MS 18850), a copy of the Bible Historiale made for Charles de Valois (1446–1472), duke of Normandy, now in two volumes (Add MSS 18856 and 18857), a collection of works by Christine de Pizan (Harley MS 4431) and Giovanni Boccaccio, Des Cas des nobles hommes et femmes (Royal MS 20 C IV).

The exhibition, at the German Historical Museum in Berlin from 13 June 2018 to 6 January 2019, views Europe as a maritime continent, showing the sea's fundamental role as a route of conquest, a resource, and a place of imagination and memory for Europeans through the ages.