The reign of Ivan Alexander (r. 1331–71) was a high point in the cultural history of Bulgaria, and the Tsar’s personalised copy of the Gospels translated into the Slavonic language is the most celebrated surviving example of Bulgarian medieval art. In 2017, the book was added to the UNESCO Memory of the World Register. As part of the celebration of Bulgarian National Day of Culture on 24 May, the manuscript was also featured on Bulgarian television. The Gospel-book has been fully digitised, and is available on the British Library’s Digitised Manuscripts site. 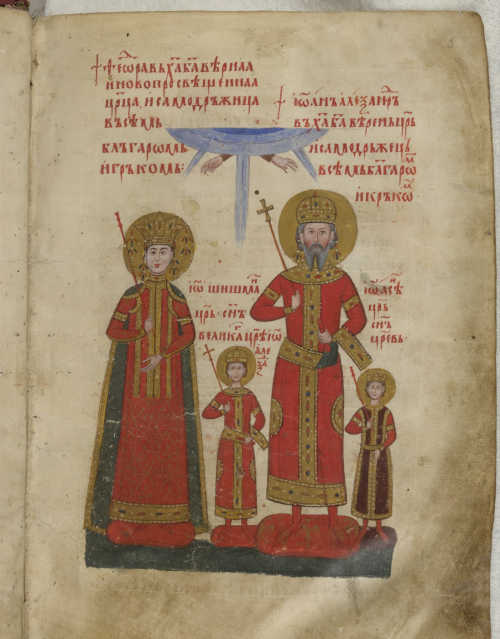 The makers of this book, who probably worked at the Tsar’s capital, Turnovo, drew on the long tradition of Byzantine book production and more recent Slavonic practices. They also conceived it as part of the Tsar’s revival and championing of Christian culture in the Balkans as the power of the Byzantine emperor ebbed and that of the Ottoman Turks grew.

In the words of its scribe Simeon, the volume was created ‘not simply for the outward beauty of its decoration … but primarily to express the inner Divine Word, the revelation and the sacred vision’. It now retains an extraordinary 367 ‘life-giving images of the Lord and his glorious disciple Jesus’. Once also richly decorated on the outside, bound within silver-gilt boards, the manuscript was probably displayed during services on major feast days attended by the Tsar and his family and intended to commemorate them in perpetuity after their deaths. 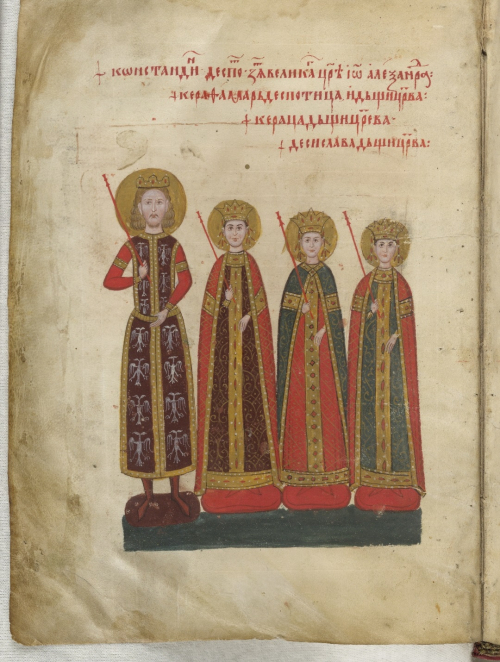 At the opening of the volume, an imposing double-page portrait contrived in the tradition of Byzantine imperial portraits reflects both the artistic heritage of its creator and the imperial ambitions of the Tsar. In this image Tsar Ivan Alexander and his family together receive God's blessing. The Tsar is depicted dressed in imperial regalia and accompanied by his second wife, Theodora, a converted Jew, and by their two sons Ivan Shisman (r. 1371–1395) and Ivan Asen (d. 1388?). On the left-hand page are the Tsar’s three daughters, the eldest of whom, Kera Thamara, stands beside her husband, Despot Konstantin. 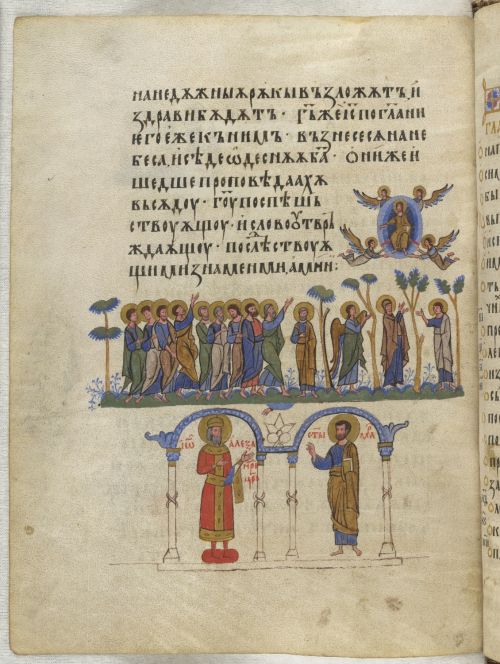 Christ ascends to Heaven above his disciples and Mary; Tsar Ivan Alexander receives the blessing of St Mark, all at the end of St Mark’s Gospel: Add MS 39627, f. 134v

Ivan Alexander is also shown in the company of each of the Evangelists at the end of their Gospels and between Abraham and the Virgin Mary in a large illustration of the Last Judgment prompted by St Mark’s account of Jesus’s prophecy to his disciples. These portraits promote the full integration of the secular and religious roles of the Tsar. 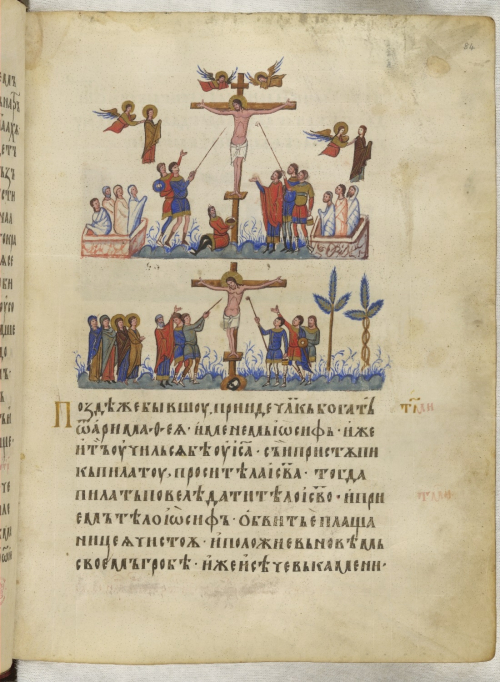 Christ on the Cross before and after his death, mocked by the crowd (below) and bleeding from the lance wound, with the dead raised from their graves by the ensuing earthquake (above), in St Matthew’s Gospel: Add MS 39627, f. 84r

The biblical text of the volume is equally lavishly decorated. Within the text several hundred illuminated miniatures illustrate the life and teachings of Christ in the sequence narrated by each of the Evangelists, focusing on his infancy, miracles, parables and Passion. Given the fourfold narrative of the Gospels and the profuse illuminations in the volume, many episodes common to more than one of the Gospels are illustrated several times. Most of these scenes are contained within one relatively shallow, horizontal strip, but some are extended to two or three such strips stacked vertically up the page or restricted to a smaller box within the text block.

None of these choices were the original idea of the makers of the Tsar’s book. They were instead based on the illuminations of an equally extraordinary Byzantine manuscript (untraced). In their frieze format and choice of subjects the miniatures correspond most closely to a remarkable 11th-century manuscript of the Gospels now in Paris that was produced at the Studios Monastery in Constantinople and possibly made for the Emperor Isaac I Comnenus (r. 1057–1059) (Paris, Bibliothèque nationale de France, MS grec 74). Only one other contemporary Byzantine Gospels, now in the Laurenziana Library at Florence, presents a similarly extended sequence of nearly three hundred frieze miniatures (Florence, Bibioteca Medicea Laurenziana, Plut. 6.23).

The individual portraits of the Tsar in his volume replace those of an abbot in the Studios Gospels; the opening family portrait may have been modelled on a now-lost imperial family portrait at the opening of the Byzantine manuscript from which it drew its other illustrations. Later Slavonic manuscripts of the Gospels that incorporate similar portraits and frieze miniatures reflect continued respect for this type of Gospels into the 17th century.

Scot McKendrick and Kathleen Doyle, The Art of the Bible: Illuminated Manuscripts from the Medieval World (London: Thames & Hudson, 2016), no. 35.

The manuscript has also been reproduced in a new facsimile edition.