In this spectacular portrait, Jacob, bishop of Serres (b. 1300, d. 1365), humbly presents his Gospel-book to Christ. He is shown at the end of a copy of the Four Gospels in Old Church Slavonic, known as the Serres Gospels. This book is now completely digitised, and is available to view online on the British Library’s Digitised Manuscripts site. 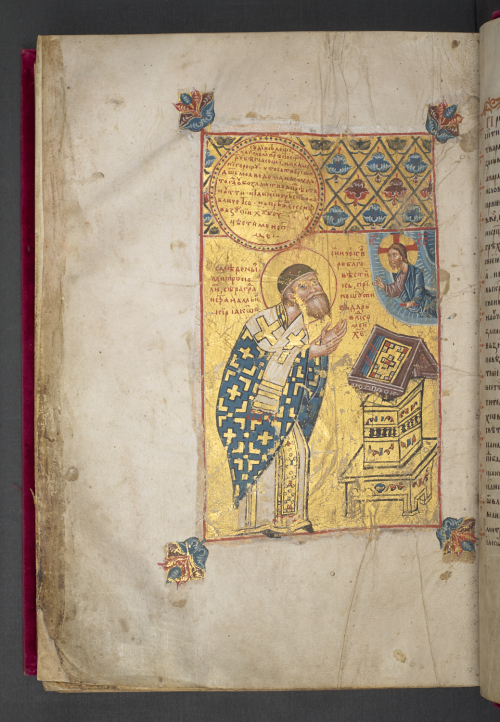 Jacob lived in turbulent times. He rose to prominence through the patronage of Stefan Dušan, who became king of Serbia in 1331 and thereafter expanded his territories. Dušan initially appointed Jacob as the first abbot of his newly-built monastery of the Holy Archangels near Prizren, which eventually became Dušan’s burial place. He then promoted Jacob to the position of bishop of Serres after conquering the city in 1345.

Perhaps acknowledging the exceptional circumstances that led to its creation, the Serres Gospels contains a lengthy inscription explaining that it was made for Jacob at the Metropolitan Church of St Theodore in Serres, in 1354, in the time of Tsar Stefan Dušan, his wife Helena, their son Kral Uros, and the Patriarch Joanikije (who died on 3 September 1354, providing the latest possible date for the manuscript). At the end of the inscription, the scribe signed his name in the shape of a cross as Kallist Rasoder. Rasoder is an epithet referring to ragged clothes, suggesting Kallist’s commitment to a life of humble austerity. 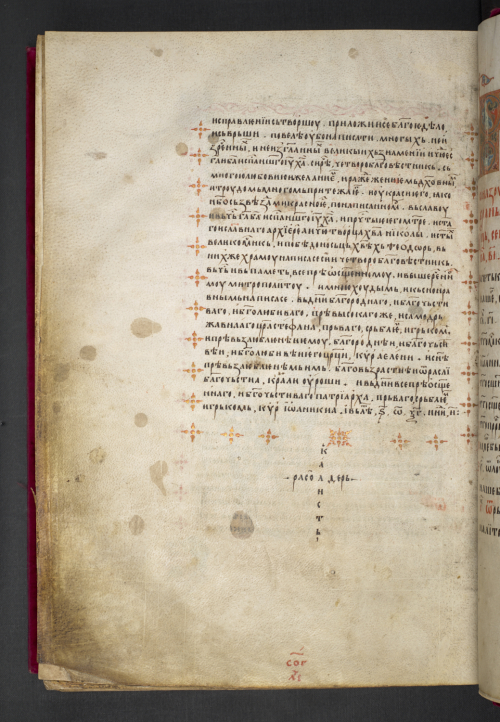 In contrast to its austere scribe, the Serres Gospels is gloriously lavish. Throughout the manuscript, headings, initial letters and punctuation marks are written in gold, and each of the four books of the Gospels begins with a panel of ornament (a headpiece) painted in gold and rich colours.

Most impressive of all is the manuscript’s only full-page picture, the portrait of Jacob making his donation (pictured above). Unusually, it was made by gilding the entire surface within the frame, and then painting over the top of the gold. Where the paint has worn away, you can see the gold shining through underneath. This difficult and expensive technique makes the picture brilliantly luminous.

Jacob is depicted in his clerical robes standing in a supplicant posture with his bejewelled manuscript before him — a self-reference to the Serres Gospels. The inscription beside him supplies his speech: ‘This tetraevangelion (Gospel-book) I am offering to Thee, Christ, my Lord’. Jacob’s face is delicately painted and expressive, and he gazes imploringly at the viewer with deep blue eyes. In the top right, Christ emerges from the heavens to receive his gift.

The inscription in the roundel above contains a poetic prayer from the vespers service of the Sunday before the Great Lent: ‘While the Judge is sitting and angels standing before [Him], while the trumpet is sounding and the flame is burning, what will you do, o my soul brought to judgement? Then thy evil deeds will be brought before [Him] and thy secret sins will be revealed. But before the end, beseech Christ the Lord: God make me pure and save me’. 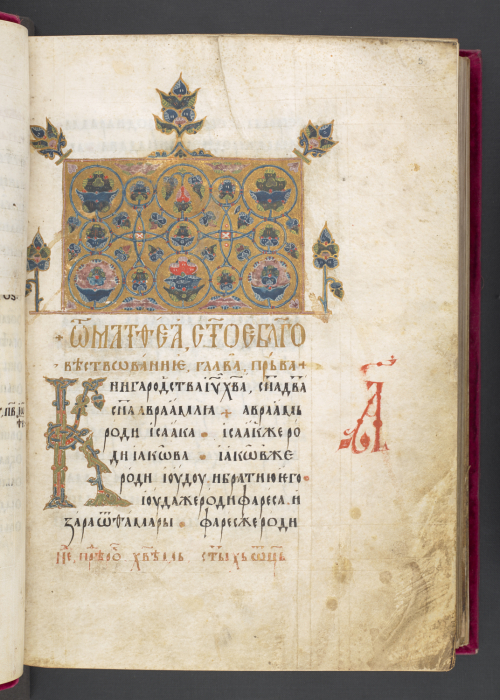 Despite Stefan Dušan’s death in 1355, Jacob maintained his office as bishop of Serres until his own death in 1365. His manuscript continued to be treasured, and today survives as testament to the spiritual devotion and artistic magnificence of its age.