Two in one: a newly-identified bilingual papyrus

A newly-identified papyrus in Latin and Arabic has recently been discovered in the British Library’s papyrus collections. In the course of the Library’s collaboration with a Naples-based research project, Dario Internullo has identified an unique document: a private letter from 7th- to 9th-century Egypt written in two languages. 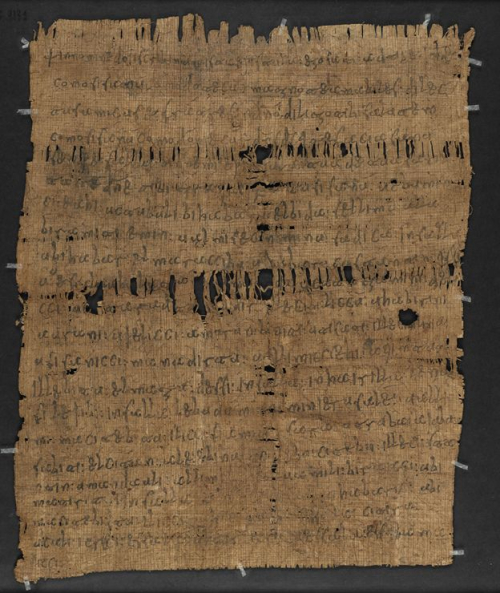 The first page of Sati’s letter in Papyrus 3124

The first language of this letter is Latin, a very lively Latin, in which the sender, whose name is 'Sati' (Sāṭi‘), greets the recipient, his friend 'Iohannes', and asks after his health.

The beginning of Sati’s greetings to Iohannes from Papyrus 3124r

A new section then starts. The script remains the same, using the Roman alphabet, but the language has switched: it is now in Arabic that Sati continues to address Iohannes. Here he mentions another friend 'Custantin', and some business relating to linen with which they are all involved.

Documents written in an alphabet different from the one that is commonly used for that language are not uncommon, but this particular combination — Arabic written in the Roman alphabet — is rather unusual. This document has an immense significance as it provides one of the earliest continuous texts to register Arabic consonants and vowels, enlarging the corpus of sources for early Arabic. The language of the papyrus is Middle Arabic transcribed on the basis of phonetic principles and free from the influence of Classical Arabic orthography.

As for the contents, the letter is linked to some kind of business — possibly the trading of linen — and it contains a general request for news. The onomastic data seems to point toward Egypt, where Latin imperial names were used in at least two regions (the Theban west bank and Aphrodito). The letter was probably dictated by the sender, Sāṭi‘, to a scribe with a graphic and linguistic education in Latin.

The back of Sati’s letter recording the sender’s name in Arabic written in the Roman alphabet as 'From Sāṭi‘, House of Ibn Manṣūr', Papyrus 3124v

The newly deciphered Papyrus 3124 compellingly combines two different cultures often considered as opposites, while elucidating a social network stretching from Egypt to Palestine. It also leads us to reflect in a more articulated way on the survival of Latin in the East long after the hegemony of Greek in the 6th and 7th centuries AD.

The text of this papyrus has been edited by Dario Internullo and Arianna D’Ottone Rambach, in One Script for Two Languages: Latin and Arabic in an Early Allographic Papyrus, in Palaeography Between East & West. Proceedings of the Seminars on Arabic Palaeography held at Sapienza University, edited by A. D’Ottone Rambach, Supplement no. 1 to the Rivista degli Studi Orientali, n.s. 90 (2017), pp. 53–72. For further information, see the article by Dario Internullo, 'Un unicum per la storia della cultura. Su un papiro latinoarabo della British Library (P.Lond. inv. 3124)', Mélanges de l’École Française de Rome. Moyen Âge, 128/2 (2016).

To learn more about the British Library's acquisitions of Greek and Latin papyri since 1956, please see this previous blogpost.

Posted by Ancient, Medieval, and Early Modern Manuscripts at 12:32 PM