In anticipation of the British Library's major Anglo-Saxon Kingdoms exhibition, which opens on 19 October, we are delighted to have added the vast majority of our Anglo-Saxon single-sheet charters to our Digitised Manuscripts site. A full list of the 203 charters currently available can be downloaded here; we plan to add the remaining 8 charters in due course. 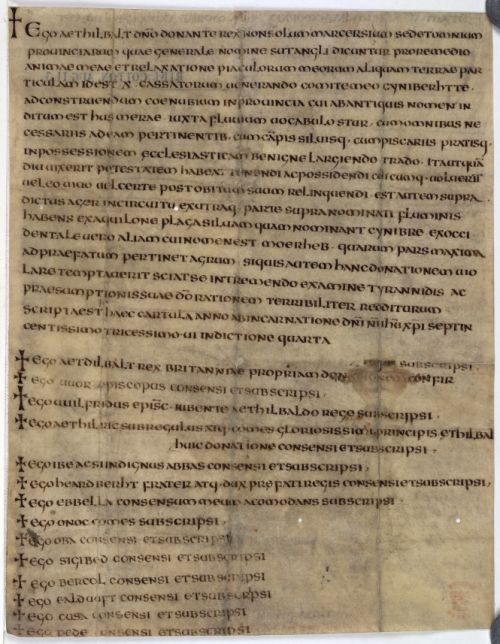 King Æthelbald of the Mercians and of the South Angli grants ten hides at Ismere by the river Stour and land at Brochyl in Morfe forest, Worcestershire, to Cyneberht, comes, for the construction of a minster, dated 736: Cotton MS Augustus II 3

The British Library holds the world's largest collection of Anglo-Saxon charters. They are issued in the names of kings, bishops and laypeople, and include a considerable number of writs, wills, records of disputes and decrees of synods. The charters supply significant testimony to the evolution of English handwriting (the scripts deployed include uncial, pointed minuscule, square minuscule and English Caroline minuscule). They are composed primarily in Latin but with a considerable number in Old English (or with Old English bounds). Some of the documents are originals or were issued contemporaneously, while others are later copies or are deemed to be forgeries. Collectively, these charters provide us with substantial evidence for early English political, ecclesiastical, administrative and social history.

Archbishop Wulfstan grants a lease, for three lives, of a half hide at Perry Wood in St Martin’s-without-Worcester, to Wulfgifu, with reversion to the church of Worcester, 1003 × 1016: Add Ch 19795

We recently learned the sad news of the death of Peter Sawyer, whose handlist of Anglo-Saxon charters (published in 1968) has proved invaluable to generations of scholars. Many of the charters now available online have also been edited in recent years on behalf of the British Academy/Royal Historical Society Joint Committee on Anglo-Saxon Charters, and we are indebted to scholars such as Susan Kelly, Simon Keynes and the late Nicholas Brooks for their editions and painstaking investigations into these documents. 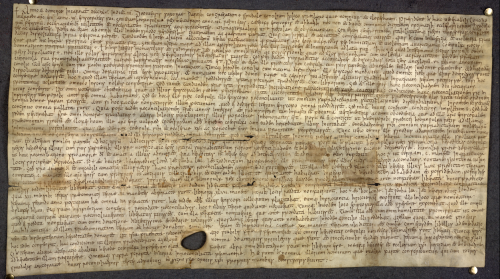 Record of a dispute between Archbishop Wulfred of Canterbury, King Coenwulf of the Mercians, and Abbess Cwoenthryth, concerning the minsters of Reculver and Minster-in-Thanet, and of the dispute’s settlement by the transfer to Wulfred of a hundred hides at Harrow, Herefrethinglond, Wembley, and Yeading, all in Middlesex, and thirty hides at Combe, Kent, 825: Stowe Ch 15

King Æthelstan of England grants privileges to the bishopric of Crediton in return for 60 pounds of silver, 933: Cotton MS Augustus II 31 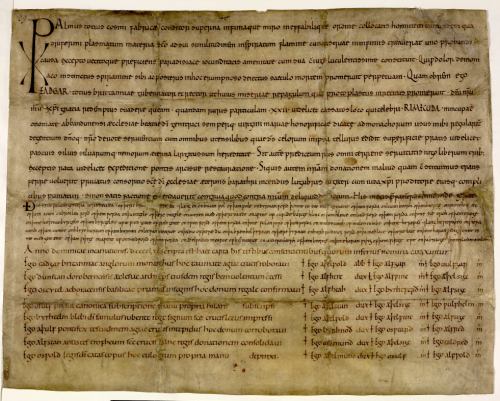 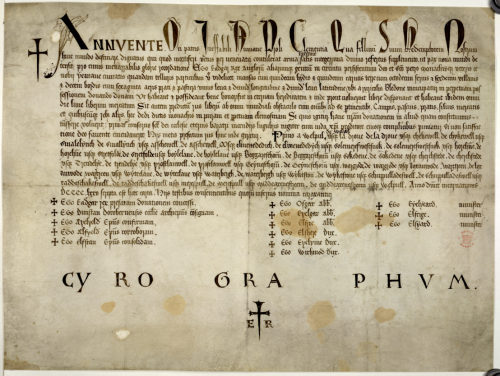 Bishop Eadnoth of Crediton mortgages a yardland by the river Creedy, Devon, to Beorhtnoth, probably 1018 (copied in the 13th century): Cotton Roll II 11 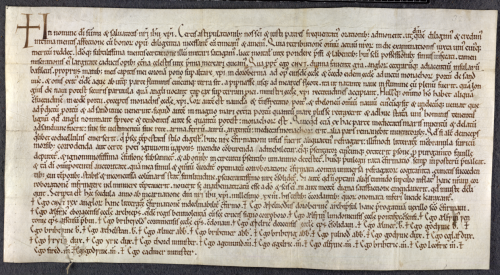 King Cnut of England grants his crown and the port of Sandwich to Christ Church, Canterbury, 1023 (copied in the 12th century): Stowe Ch 39 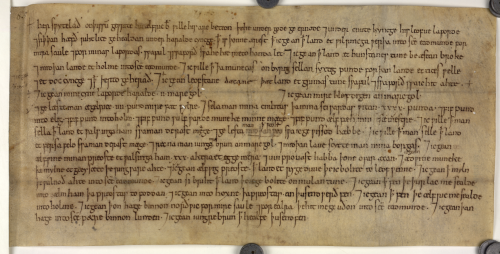 Over the coming months, and throughout the Anglo-Saxon Kingdoms exhibition, we will be blogging about some of the Anglo-Saxon charters in the British Library's collections, starting with this charter made 1,025 years ago (Cotton MS Augustus II 38). While charters may not be as beautiful as some of the magnificently illuminated manuscripts from the period, they are every bit as exciting. Many of the charters we have digitised are presumed to be originals: they may have been seen and touched by some of the historical figures mentioned in the text, at crucial moments in history. 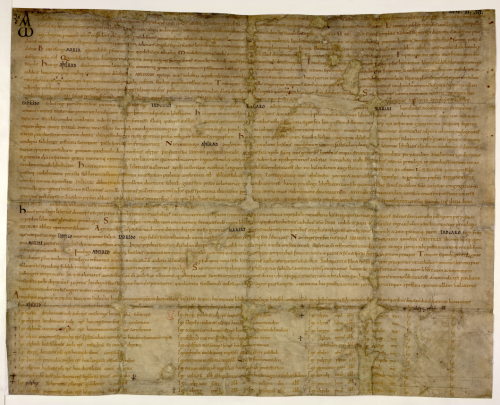 King Æthelred of England confirms the privileges of Abingdon Abbey, including the right of free election of a new abbot, 993: Cotton MS Augustus II 38

In this charter, King Æthelred (‘the Unready’) confirmed the rights and property of Abingdon Abbey. The text mentions ‘frequent and numerous difficulties to me [Æthelred] and my nation’ in the past decade. This seems to be a reference to the Scandinavian forces that had begun attacking England again in the 980s, culminating with the disastrous defeat of English forces at the Battle of Maldon. Æthelred therefore repented of his youthful indiscretions and issued a series of ‘penitential’ charters, including this one, to try to protect some of the churches he had neglected and to set his kingdom right.

We know at least some of the people mentioned in this text actually touched this piece of parchment because some of them left marks in the shape of a cross next to their names in the witness list. (Alas, the parchment is damaged next to Æthelred’s name).

In addition to revealing major governmental reshuffles and wars, charters can also reveal more personal details. For instance, one of Æthelred’s ‘youthful indiscretions’ involved kicking his mother out of his court when he was a teenager. In this charter, she appears in the witness list, suggesting that she had become a powerful force in the kingdom and was accepted at court again. She appears in the witness list next to Æthelred’s sons, whom she was helping to bring up. Removing your mother from the palace clearly did not preclude relying on her for childcare.

I am interested in any documents that refer to the then West Welsh or monasteries and people in Cornwall. Do you have any such documents?

***
To find charters relating to early Cornwall, we recommend the Electronic Sawyer database (http://www.esawyer.org.uk/about/index.html). Bear in mind that some early documents are copied into the margins of other books: see, for instance, the inscriptions in the Bodmin Gospels (Add MS 9381), which provide a great deal of information about 10th- and 11th-century Cornwall. For early Welsh charters, a good place to start is Huw Pryce's The Acts of Welsh Rulers, 1120-1283.
Ancient, Medieval and Early Modern Manuscripts