For the past twenty-five years, thousands of medievalists from around the world have travelled every July to the Leeds International Medieval Congress. This is the United Kingdom’s largest academic conference and one of the largest global gatherings of medievalists. With nearly 3,000 participants this year, the IMC provided the perfect opportunity for The Polonsky Foundation England and France Project team to showcase their work ahead of its official launch in November.

On the morning of 3 July, the project’s cataloguers, Laura Albiero and Francesco Siri from the Bibliothèque nationale de France, and Cristian Ispir from the British Library, presented research on manuscripts in the project, highlighting aspects which have benefitted particularly from the availability of digital images. Thanks to The Polonsky Foundation, everyone will soon be able to access 800 medieval manuscripts online.

Laura’s paper gave examples of the project’s liturgical manuscripts, and discussed how the names of different saints in the calendars help us to trace the origin and movement of individual manuscripts across the Channel. Erasures and additions tell their own tale of changing ownership through analysis of the veneration of particular local saints. Cristian followed with an overview of author portraits and decorative elements in manuscripts containing Classical Latin texts. Francesco’s presentation focused on diagrams and their use in texts such as philosophical works, and defined the different functions they perform. 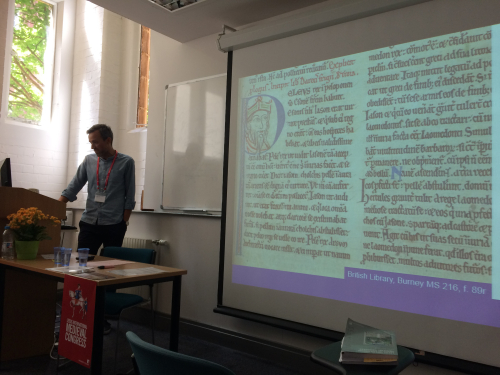 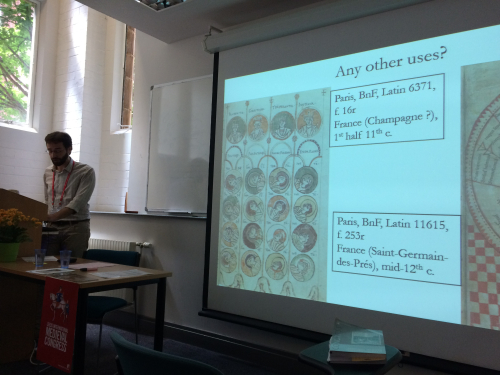 Cristian Ispir and Francesco Siri presenting on the visual content in some of the project manuscripts.

The second session presented by the team gave an overview of the project itself. Tuija Ainonen, The Polonsky Foundation Project Curator at the British Library, drew attention to The Polonsky Foundation and the roles of the two project partners. She highlighted the various goals of the project: the full digitisation of 800 manuscripts (400 from the British Library and 400 from the BnF); the publication of a book highlighting selected manuscripts from the project; and the building of two websites — one hosting all 800 manuscripts, with 260,000 digitised images in total, and another bilingual interpretative site for a wide public audience which will present a selection of manuscripts in the project. Even interoperable image viewers, annotations, and the plan to allow image downloads had their few minutes in the spotlight: see this earlier blogpost for more details. 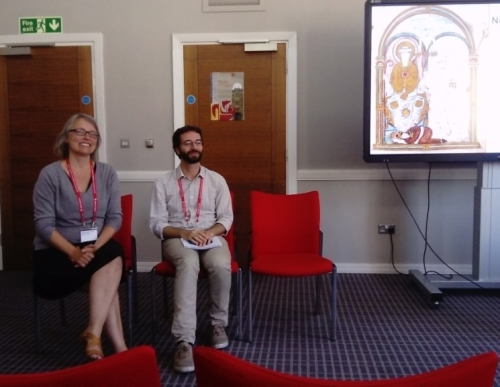 The project’s coordinators Tuija Ainonen and Francesco Siri at the discussion and question time.

The audience then saw the different stages in the digitisation of 800 manuscripts and online publication in various forms. In this evening session Francesco Siri discussed the demands and challenges of cataloguing and conservation in digitisation projects. Alison Ray, Curatorial Web Officer at the British Library, discussed the workflow, from photography and image processing through to presentation in various online environments including social media and the bilingual interpretative website that will launch in November. She also reminded the audience that 600 project manuscripts are already fully digitised and available via Digitised Manuscripts for the British Library and Gallica for the BnF. As the project is ongoing, the IMC presentation was very much a sneak preview of things to come. Our readers will be able to see the full outcomes at our project conference in Paris in 21–23 November 2018. Attendance is free but registration is required.