British television has been swept off its feet this summer by a certain reality contest in which a group of singletons compete to find romance on an exotic island. Love it or loathe it, society has always been infatuated with dating and finding true love, especially during the Middle Ages. This is shown in many medieval romance tales and guides to love. The Castle of Love under the siege of romantic knights as maidens defend themselves with flowers, from the Luttrell Psalter, Add MS 42130, f. 75v

In place of the modern island, the medieval castle was used in art and literature to set the scene for love. The ‘Castle of Love’ popularly appeared in literature as a figurative representation of the Virgin Mary, such as in Robert Grosseteste’s religious poem in Anglo-Norman French, Le Chasteau d’Amour. The castle of this poem is a spiritual tower of strength and its architecture symbolises Mary's characteristics, with the turrets representing her virtues and the baileys her chastity, maidenhood and marriage.

The Castle of Love soon became a secular and more light-hearted image, as depicted in the 14th-century Luttrell Psalter (Add MS 42130). Knights can be seen clamouring with weapons to reach the maidens inside a model castle, who are defending themselves playfully with flowers. The illustration is placed in the margin of a passage from Psalm 37, with King David stating his enemies ‘that render evil for good, have detracted me, because I follow goodness. Forsake me not, O my Lord’ (Ps 37:20–21). The maidens most likely symbolise virtue and the knights the temptations of vice. 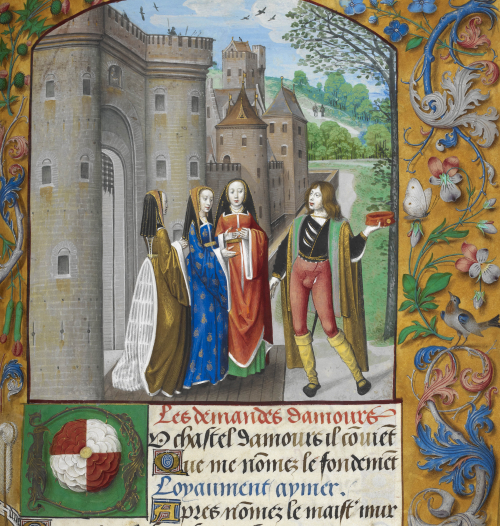 How you doing? A young man addresses three women at the gate of the Castle of Love, from Royal MS 16 F II, f. 188r

The Castle of Love again features in a late 15th-century illuminated manuscript (Royal MS 16 F II) containing a guide to love, Les demands en amours. Opening with the chastel d’amours, the text contains a list of 18 questions in verse and 87 in prose on how to find a suitable lover. Similar to relationship columns today, the text advises the reader to declare his love wisely, to live joyously, dress well, be pleasant socially and to sustain his love through the exercise of ‘courtoysie’. 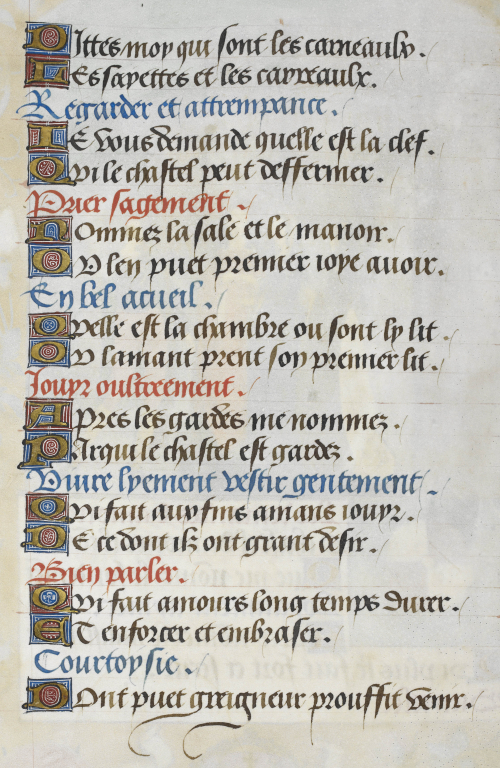 This manuscript was made for an aristocratic reader. It may have been first intended for King Edward IV of England but was left unfinished after his death in 1483; it may then have been completed by 1500 for King Henry VII and his family. 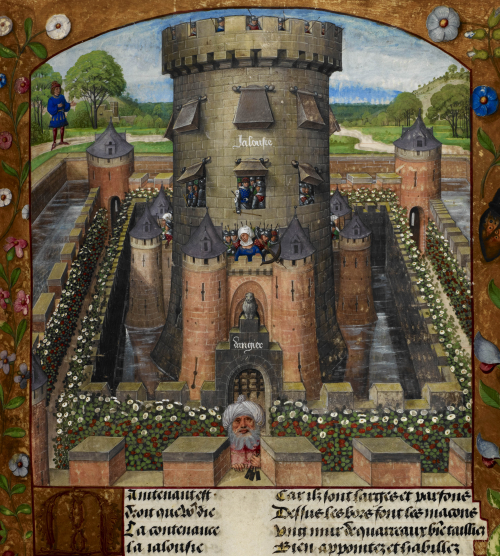 The Castle of Jealousy where Fair Welcome is Imprisoned, from Harley MS 4425, f. 39r

Medieval writers were also aware of the darker side of courting. The Castle of Jealousy appears in a late 15th-century Flemish copy of Guillaume de Lorris and Jean de Meun’s Roman de la Rose, a popular tale in which a lover dreams of a rose held captive in a castle, shown above. Here the lover waits outside the outermost wall of the castle, unable to get past Danger (Dangier) holding the keys to the gate and the many soldiers who guard the tower of Jealousy (Jalousie) to reach the beautiful rose represented by a woman. The course of true love never did run smooth! 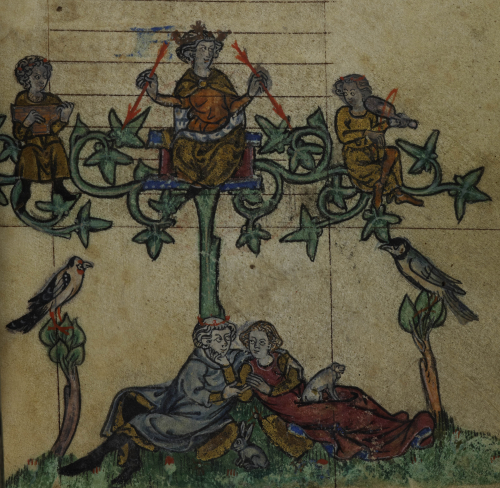 The king of love sits in a tree with two musicians, aiming his arrows at a couple sitting below, from the Maastricht Hours, Stowe MS 17, f. 273r