In Chaucer’s famous opening line to the Canterbury Tales, ‘Aprille with his shoures soote’ (April with its sweet showers) was the time when people longed to set off on their travels. Of course, holidays as we know them were not enjoyed by medieval folk. The word itself comes from ‘Holy Days’ in the Church calendar, when a break from daily routine usually involved praying and fasting, not sunbathing and drinking cocktails on the beach. But people have always enjoyed visiting new places, and so pilgrimages were a popular way of taking a break at the same time as showing piety and atoning for one’s sins — a great all-inclusive package!

One medieval pilgrim was St Roch, who tended plague victims. He is usually pictured in typical pilgrim’s garb, with the staff, scrip or bag and shell (the symbol of Santiago and all pilgrims) on his hat. When he caught the plague himself, he was healed by a hunting dog who licked his wounds and brought him bread. 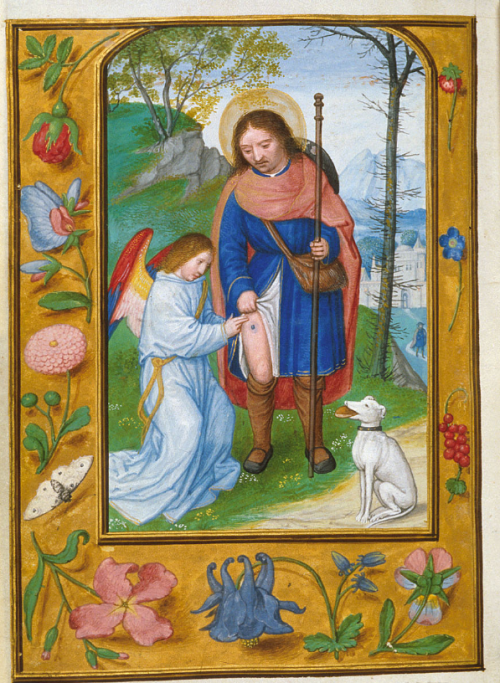 Miniature of Roch, showing a plague-spot on his thigh, with an angel and a dog holding a loaf, from the Prayer-book of Joanna of Ghistelles, Ghent, c. 1516: Egerton MS 2125, f. 209v

Instead of backpacking in Thailand, booking a package holiday to the Costa Brava or braving the traffic jams to the English seaside, medieval pilgrims headed for Palestine, northern Spain or Kent. Some of the leading destinations for English pilgrims were Jerusalem, Santiago de Compostela and Canterbury.

Pilgrimage to the Holy Land

The holy places in Palestine were the ultimate destination for medieval Christian pilgrims, although the journey could be arduous. Margery Kempe, the famous English mystic, travelled from Norfolk to Jerusalem and Rome in 1413–15, as recounted in her autobiography. Even kings could be pilgrims, including Louis IX of France: when on crusade to the Holy Land in 1251, he went on a pilgrimage from Acre to Nazareth on the Feast of the Annunciation.

Travellers to distant places needed maps. This plan of Jerusalem is found in a book of maps and sea charts, produced in Venice. It shows the holy sites including David's Tower, the Holy Sepulchre, Calvary, Pilate's house, St Anne's house and the Temple of Solomon. 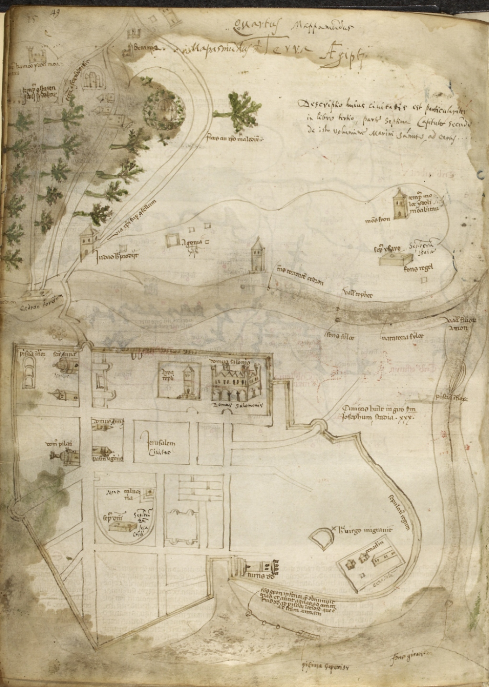 This city in northern Spain is believed to be the resting place of St James, one of the twelve apostles. According to legend, James went to Spain to spread the Gospel before returning to Jerusalem, where he was beheaded. His friends placed his head and body in a boat, which miraculously carried them to the Galician coast. After suffering trials and persecutions at the hands of local pagans, they finally buried his remains on a hill (now the site of the famous cathedral of Santiago), where they lay forgotten for many centuries. The cult of St James was revived in the 7th and 8th centuries when Christianity in Spain was under threat from Muslim expansion. St James allegedly appeared in a dream to Charlemagne, urging him to liberate his tomb from the Moors and showing him the direction to follow by the Milky Way: the name Compostela is believed to derive from the Latin campus stellae (field of stars). 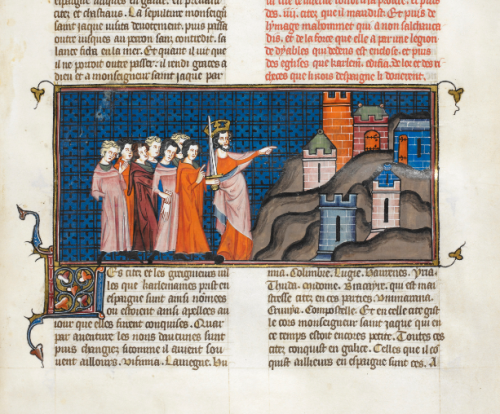 The first known pilgrim to Santiago de Compostela was Gotescalc, bishop of Puy in France, who visited the shrine in 950. The Empress Matilda, granddaughter of William the Conqueror, went on pilgrimage there in 1097. By the 12th century, half a million pilgrims were travelling from as far as Scandinavia, England and southern Italy, and hospitals, hostels, roads and bridges had been built to accommodate them. A pilgrims’ guide, the Liber Sancti Iacobi, was produced, listing the towns along the way, providing useful phrases in Basque to use when travelling through that region, and warning pilgrims against certain local foods and customs. 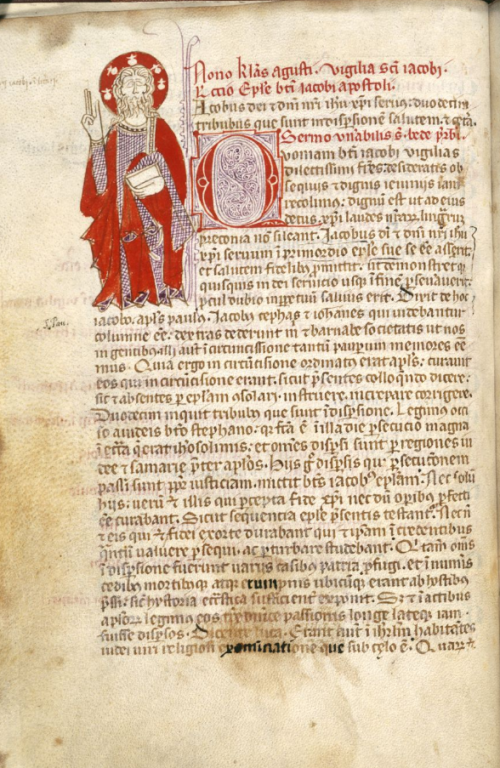 The Camino de Santiago is now a very popular pilgrimage route, with many walking from St Jean Pied de Port in the Pyrenées, a journey of six weeks. Getting there and back is much easier than in the Middle Ages, when most people walked or rode on horseback. The ‘Camino Ingles’ (English Way) has starting points at the ports of La Coruña and Ferrol, where medieval pilgrims arrived by boat from Britain.

Pilgrims came from all corners of Europe to worship at Canterbury Cathedral, where Archbishop Thomas Becket was murdered by four knights on the evening of 29 December 1170. In this compilation of Becket’s letters, accompanied by John of Salisbury's account of his life and death, is an image showing the martyrdom in four narrative scenes. The upper two depict Becket at table, being told of the knights' arrival. The lower sections show Becket’s martyrdom in the church and the later veneration of his shrine by four kneeling figures. 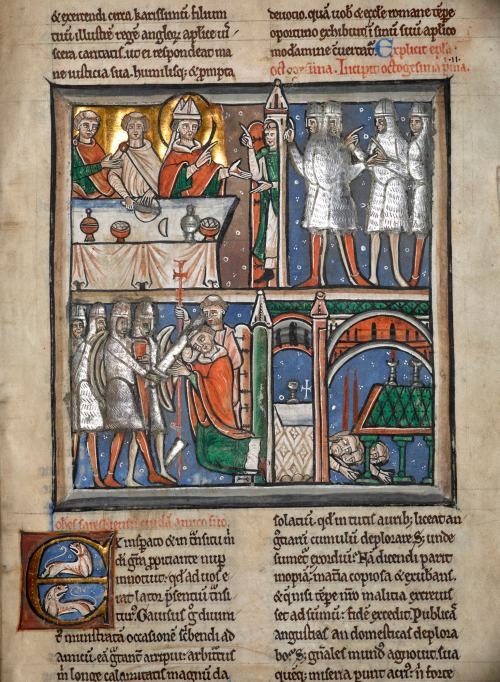 Chaucer’s pilgrims travelled from Southwark in London to Becket’s shrine at Canterbury. The routes from London and Winchester remain popular with modern pilgrims, passing through the Sussex and Kent countryside. 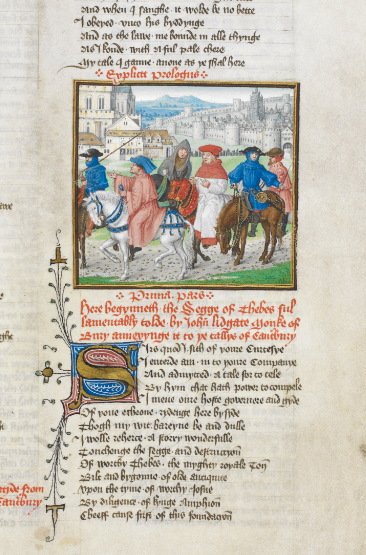 Many people like to watch travel programmes on television, seeing places we may never visit. Some people were unable to go on pilgrimage, but they could make a spiritual journey using guides or maps. Numerous medieval versions of the allegorical pilgrimage were written for this purpose, where the pilgrim had to overcome various obstacles to reach the final goal of spiritual fulfilment. In this French text, the pilgrim is guided by the lady Grace-Dieu. 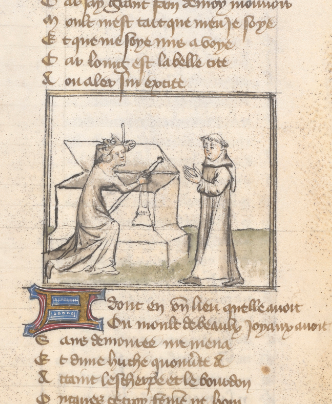 Matthew Paris’s famous itinerary of the route to Jerusalem is considered to be a guide for a spiritual rather than a real journey from London to the Holy Land, as he does not provide distances or practical details. As far as we know, Matthew never made the journey himself, instead learning of the route from travellers who passed through St Albans Abbey in the 13th century. The first part of his plan shows the journey from London in the lower left-hand column to Dover and then, in the right-hand column, from Boulogne-sur-Mer on the French coast to Beauvais. Each place is one day’s journey from the preceding one. 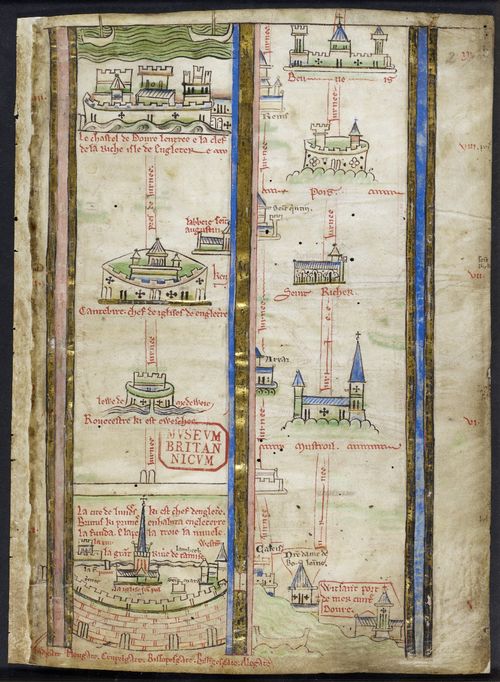 In the medieval world, animals also went on pilgrimage. Here is an example from the Smithfield Decretals.

A rabbit shooting at a dog who is dressed as a pilgrim, from the glossed Decretals of Gregory IX  (the 'Smithfield Decretals'), Toulouse?, late 13th or early 14th century: Royal MS 10 E IV, f. 57v

In this collection of animal tales in German, a fox, having grown old and setting off on a pilgrimage, refuses the companionship of the watch-dog, wild ass, bear, lion, peacock, wolf, pig and mule. Instead, he chooses to travel with the panther, ape, lamb, hare, hedgehog, ox, the young hound and the ant (let’s hope someone offers the ant a ride!). 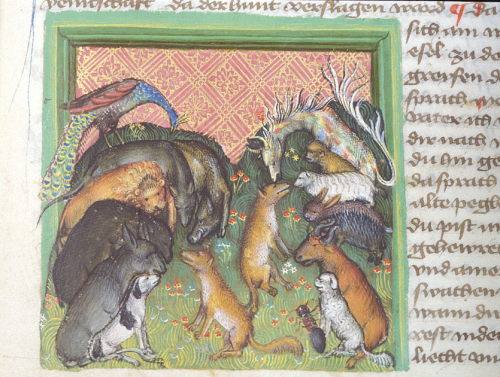 "A pilgrims’ guide, the Liber Sancti Iacobi, was produced," This is an urban legend which is still repeated on webs and blogs. The Liber Sancti Jacobi formed part of the Codex Calixtinus which is an enormous tome that was never going to be a Fodors or Frommers! Like all great historical works and documents it was actually lost and forgotten about for many years until rediscovered in 1886 by the Jesuit scholar P. Fidel Fita. There are 12 surviving copies which date from the 12th (three copies), 14th, late-15th, early 16th, 17th, and 18th centuries. Each was hand-copied from an earlier manuscript, in a tedious process guaranteed to produce errors. Nope! This wasn't the first pilgrim guide for those who could read and very few pilgrims even knew of its existence