In addition to their size and legibility, Romanesque giant Bibles sometimes indicate that they are great monastic books, by including all three of St Jerome’s translations of the Psalms in parallel columns. In the Arnstein Bible, for example, the Gallicanum of the Vulgate appears first, but is accompanied by the Romanum and the Hebraicum, the last a translation made directly from the Hebrew that was never used liturgically. Moreover, each of these three versions is illustrated. This virtuoso display of learning is found in Giant Bibles made in the Mosan and Rhenish regions in particular, although two English examples also survive. These features constitute important material evidence of the status and wealth of the monasteries that commissioned and produced these Bibles: as C. M. Kauffmann stated, they are ‘symbols of monastic corporate authority’ (Biblical Imagery in Medieval England 700-1550 (London, 2003), p. 149). 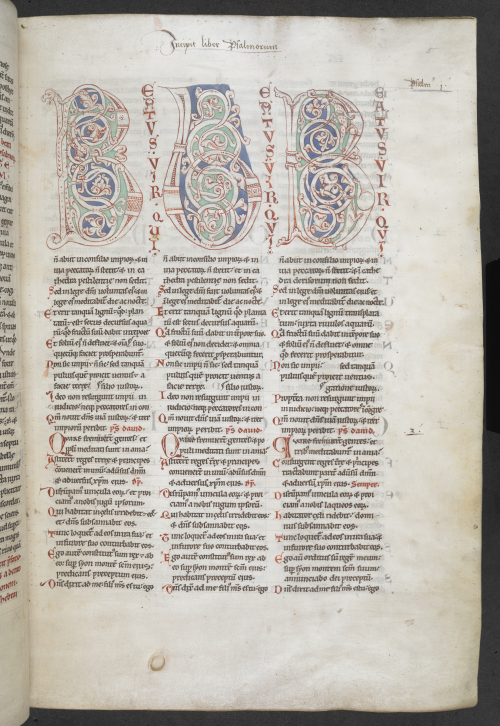 A splendid example of this occurs in the Arnstein Bible, now on display in the British Library’s Sir John Ritblat Treasures Gallery. The Psalms occur in the second volume, and are set out in three parallel columns of text, beginning with a large initial ‘B’(eatus) (blessed) created by elaborated foliate forms, clasps, and to the right, intertwined dogs or other quadrupeds.

In the initials for the beginning of Psalm 101, ‘D’(omine) features different figures in the bowl of the letter: Christ blessing, the Virgin and Child, and a bishop.

The Arnstein Bible was produced at the Premonstratensian abbey of St Mary and St Nicholas, Arnstein, in Germany. This abbey was founded in 1139 by Ludwig III (d. 1185), the last count of Arnstein, who became a lay brother and donated his castle to the new Order, established at Prémontré in northern France in 1120. Ludwig’s wife, Guda, became a hermit living in the abbey grounds. Originally, annals recording important events relating to the abbey were part of the Bible (now preserved in Darmstadt, Hessische Landesbibliothek, MS 4128). The entry for 1172 states that the book (liber iste) was written in that year by a brother called Lunandus, and asks that whoever reads it should pray that he rest in peace: ‘Qui ergo legit, dicat: Anima eius requiescat in pace’.