After the Norman Conquest, the principal language of the aristocracy in England was French, rather than English or Latin.  Perhaps not surprisingly, the Bible was translated into French at an early date. Given the importance of the Psalms in the medieval Church, several early French translations were made, including three or four versions of St Jerome’s Gallican or Gallicanum text, known as such because it was adopted in Gaul as the principal form of the Vulgate. St Jerome completed this translation between 386 and 391, basing it on Origen’s Greek text of the Psalms from the edition of the Old Testament in Hebrew and Greek, the Hexapla.

Twelve manuscripts of the 12th to 13th centuries are known of the so-called Oxford Psalter, based on the Gallicanum version, a translation compiled in England, and all have an English connection. The Winchester Psalter, with an extensive cycle of images, is the most splendid copy of these English manuscripts. 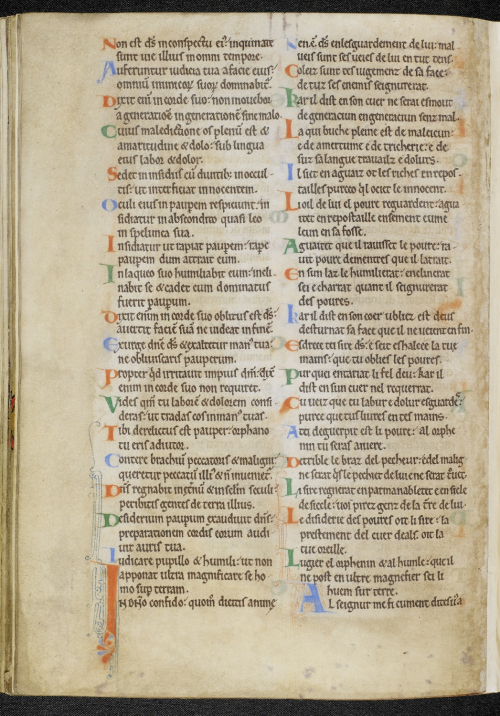 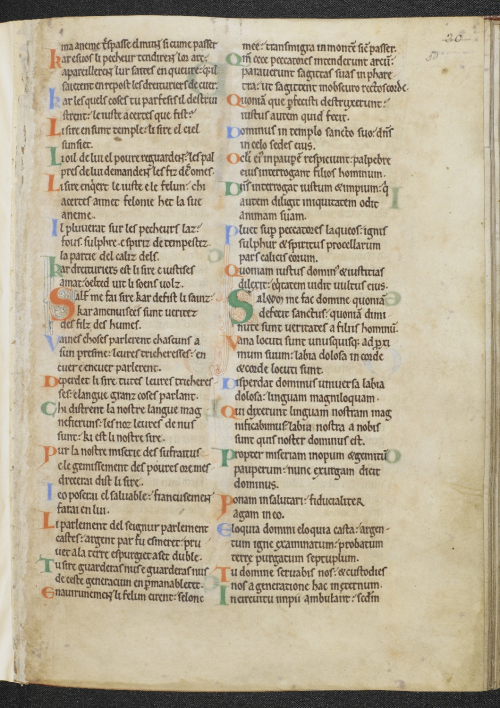 In this Psalter, the Psalm text is laid out in parallel columns. The Latin is in the right column on the rectos, and in the left on the versos, so that the French text appears side by side when the book is open. This suggests that the book may have been intended for someone who was more comfortable in French than Latin, and that Latin may have served as a kind of reference or critical apparatus to aid the reader.

The Winchester Psalter is now on display in the British Library’s Sir John Ritblat Treasures Gallery, open to the beginning of the Psalms. The manuscript is also available in full on the Library’s Digitised Manuscripts website. There is a large initial beginning each translation of the biblical text. It is the Latin initial ‘B’(eatus) (blessed) that is more elaborate, with an image of King David writing and playing a viol; while the ‘B’(eonuret) (blessed) on the left is elaborated with foliate decoration only. 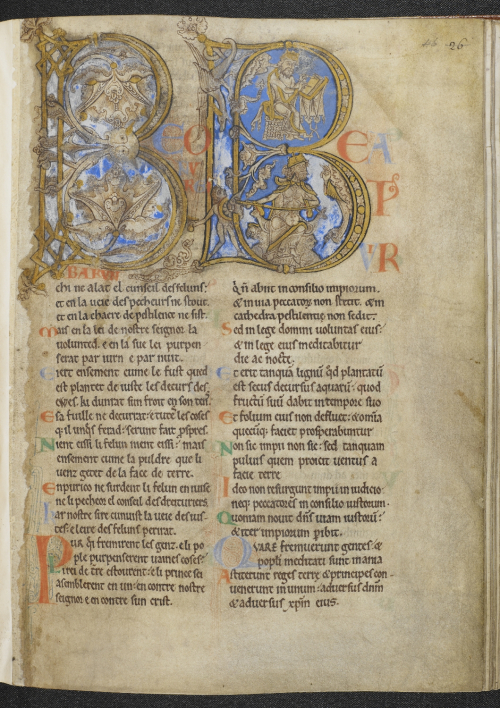 The French version of the text is interpretative rather than literal: for example, the ‘blessed man’ (beatus vir) of the first verse becomes a baron (Beonuret Barun) who does not take counsel with felons (des feluns).

The Psalter is perhaps better known for its very extensive series of thirty-eight surviving prefatory drawings with coloured washes, including the dramatic and evocative vision of the end of time, with an angel locking the door of Hell. 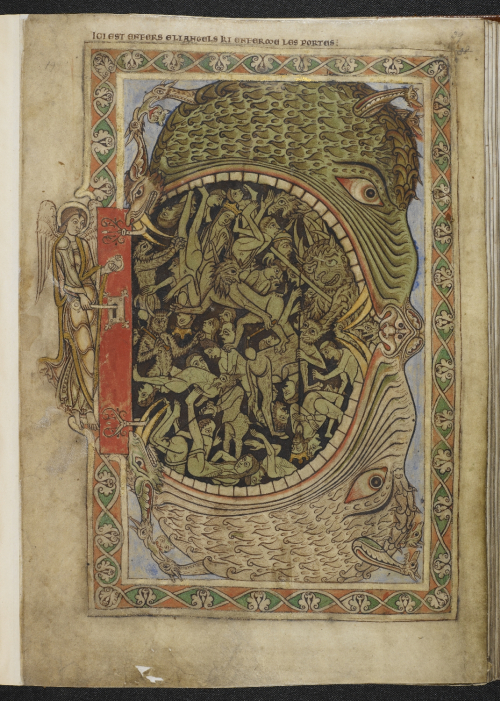 The book also includes a Calendar, which provides evidence as to its origin. Saints of particular relevance to Winchester are included, among them Bishops Æthelwold (d. 984) and Brinstan (d. 934), and saints buried or with shrines there, such as Eadburh (d. c. 951), a Benedictine nun and daughter of Edward the Elder, and Grimbald (d. 901?), by tradition the co-founder of New Minster (later Hyde Abbey). The Calendar also includes two abbots of Cluny in Burgundy, Sts Hugh (d. 1109) and Mailous (d. 994).

The bishop of Winchester throughout the middle of the 12th century was King Stephen’s younger brother, Henry of Blois (r. 1139–71), who had been educated at Cluny. Henry was one of the richest men in Europe and a known art and relic collector.  When appointed to the see of Winchester, he refused to relinquish the profitable abbacy of Glastonbury, which he held concurrently with Winchester until his death. The Cluniac references, Cathedral-specific prayer and Henry’s great wealth make him a plausible patron for such a lavish book, even if its vernacular components and central focus on the Psalms in French suggests that he may have intended it as a gift for a layperson.

Scot McKendrick & Kathleen Doyle, The Art of the Bible: Illuminated Manuscripts from the Medieval World (London: Thames & Hudson, 2016), no. 20.