A bumper crop of manuscripts (part 1)

The summer holidays may be here but we have been busy at the British Library, adding more items to our Digitised Manuscripts site. Here are some of the highlights.

The beautiful: a Spanish Book of Hours

This gorgeous Book of Hours, about the size of a modern paperback, contains 10 full-page miniatures — attributed to Juan de Carrion, an artist associated with Toledo — and 14 illuminated initials, with full borders in glorious pinks, blues and greens. They are decorated with an amazing variety of flowers, birds and all manner of creatures. This is one of eight stunning illuminated manuscripts acquired from the collector and philanthropist, Charles William Dyson Perrins (1864–1958) of Lee and Perrins, the makers of Worcester sauce. They include the Gorleston Psalter, the de Brailles Hours and the Hours of Elizabeth the Queen. These two works by Isocrates and Lucian were translated by Johannes Boerius or Giovanni Battista Boerio (d. before 1530), for Prince Henry, the future Henry VIII. Boerio was astrologist and physician to Henry VII, and this copy was made for him in Italy by Pierantonio Sallando. It contains gold borders with jewelled decoration at the beginning of each text. Lucian’s work, usually known as De calumnia, is titled Non facile credendum esse calumniate (‘On not believing rashly in slander’), good advice for a young monarch, but not necessarily followed by Henry VIII later in his reign, particularly with regard to the treatment of his wives. 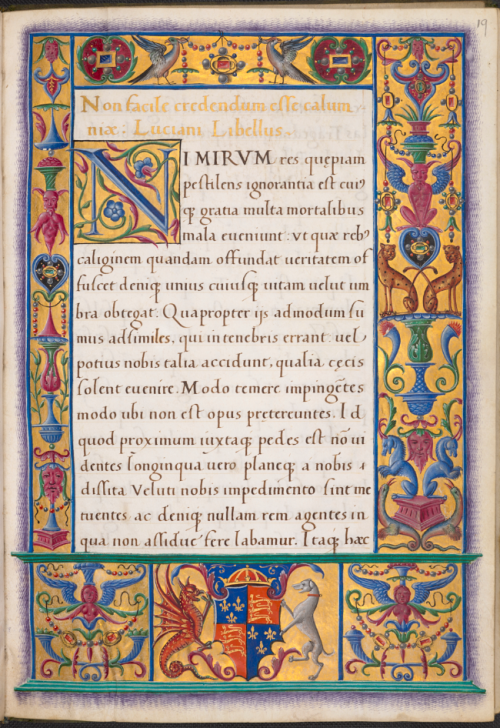 The opening page of Lucian, De calumnia, with a border incorporating the arms of Henry VII and Henry VIII, supported by the dragon and greyhound, and in the border, phoenixes and leopards, and numerous all'antica elements such as vases, cornucopia, and jewels with foliate motifs, northern Italy (Bologna), c. 1505: Add MS 19553, f. 19r

The fabulous: the Spalding manuscript

This collection of Old French texts contains a rare copy of Le Songe Vert, accompanied by a chanson de geste, two classical romances and the Ordene de Chivalrie, a set of instructions on chivalry allegedly given by Hue de Tabarie to Saladin. Le Songe Vert is a 14th-century allegorical poem, written in the Picard dialect and described by its early editor, Leopold Constans, as a ‘curieux poeme’. At the end of the plague of 1347–48, the author dons a black mourning dress and wanders into an orchard. He is consoled by a vision of love and returns with his dress a bright green. You may wonder why this volume is known as the 'Spalding manuscript': its name refers to a previous owner, Maurice Johnson (1815–1861) of Ayscoughfee Hall, Spalding, in Lincolnshire. 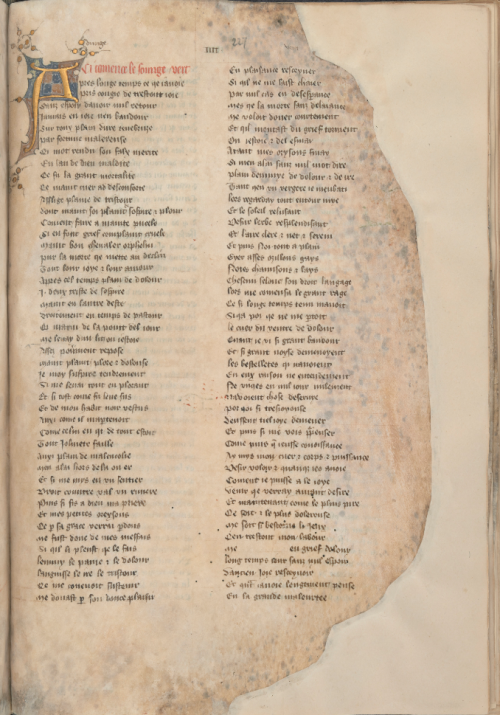 The Liber Belial or Processus Luciferi contra Jesum Christum takes the form of a lawsuit between Lucifer and Jesus Christ, with Solomon presiding. The Devil sues Christ for trespass by descending into Hell. A note on f. 2v states that the text was written on 30 October 1382 at Aversa, near Naples; it is dedicated to Angellus de Castellone of Arezzo, archpriest of Padua. 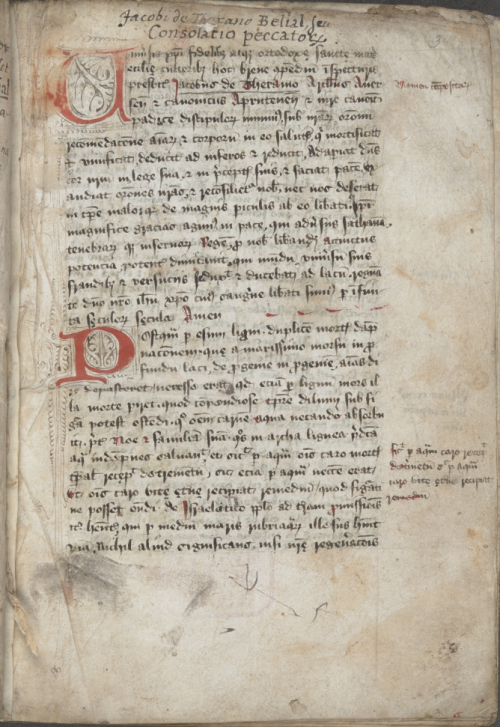 The boastful: the life and genealogy of Edward IV

For any aspiring medieval ruler intent on vaunting their prowess and legitimate claim to the throne, a connection to biblical antecedents was an absolute must. In this roll five pairs of large coloured miniatures each show an event in the career of King Edward IV on the right, with its biblical type or precedent on the left. It provides an allegorical representation of Edward's success and the fulfilment of the prophecies that he would attain the throne. To crown it all, his genealogical tree below is in the form of a biblical tree of Jesse (traditionally portraying Christ’s descent from King David), and shows Henry III reclining at the bottom, with Edward IV and Henry VI emerging as opponents at the top.

The wonderful: Ovide moralise and other French texts

In this French translation of Ovid’s Metamorphoses is illustrated the legend of the ill-fated lovers, Pyramus and Thisbe. Here they are shown at their secret meeting place under a mulberry tree. Pyramus, believing Thisbe to have been killed by a lion, has fallen on his sword and lies dead. Thisbe is about to plunge his sword into her throat. As a result, the gods changed the colour of mulberries to red to honour their forbidden love. This manuscript also contains Christine de Pizan's L'Epistre Othea, in which Hector, prince of Troy, is tutored in statecraft and political morality by Othea, the goddess of wisdom. 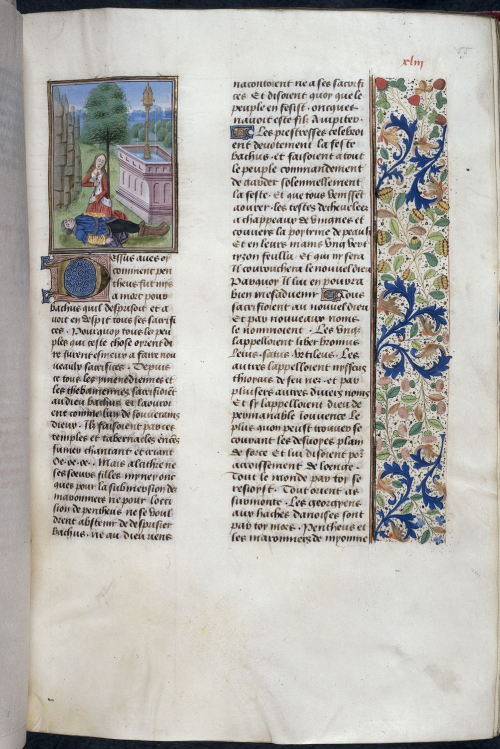 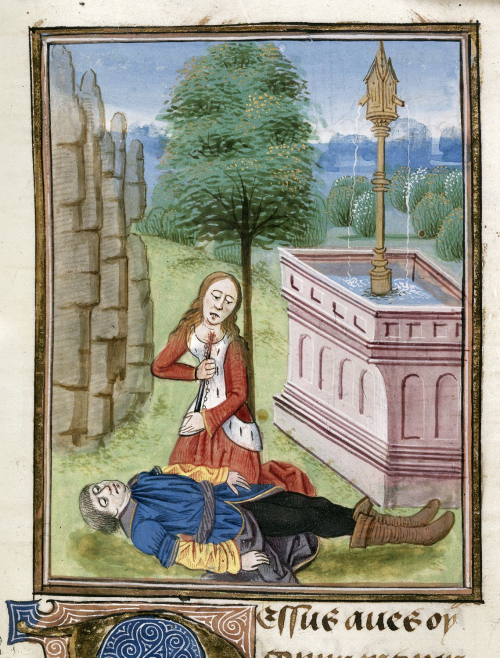 We are adding new content to Digitised Manuscripts every week. A second blogpost will describe some of the other recent additions: keep your eyes peeled!