A bumper crop of manuscripts (part 2)

We recently reported that we have added several new manuscripts to our Digitised Manuscripts site. We're delighted to say that many more can now be found online. Here are some of our favourites.

In this poem by Alain Chartier (d. c. 1433), an ambassador for King Charles VII of France, the poet meets four ladies, who tell of the fates of their four lovers who were lost at the battle of Agincourt. One lover was killed, one lost, one taken prisoner and one fled. This manuscript is believed to have been commissioned by Anne de Laval (d. 1466) of the Montmorency-Laval family of Brittany and Maine, supporters of the French king. Their coat of arms can be found in the initial on f. 1r. 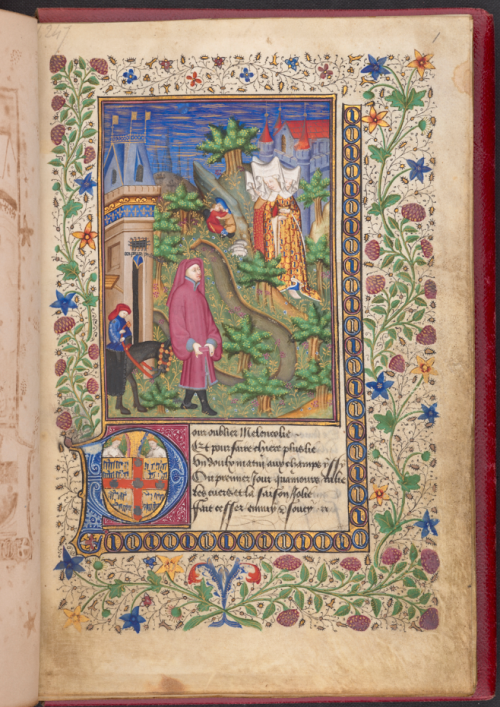 The legend of Guiron is part of the Arthurian cycle, dealing with the exploits of earlier generations of heroes, the ancestors of Tristan, Erec and the knights of the Round Table (including Palamedes and Meliadus). On this page, a historiated initial signals the beginning of the adventures of ‘Brehus sans pitie’, who meets Guiron’s grandfather in a cave. From him he hears the whole history of Guiron’s lineage, and of his exploits at the castle of Malaonc, where he befriended Lord Danyn the Red and fell in love with his wife, the Lady of Malaonc, the most beautiful woman in Britain. Later, they both fell in love with the Lady Bloye and Guiron first defeated Danyn, then rescued him from a dragon. 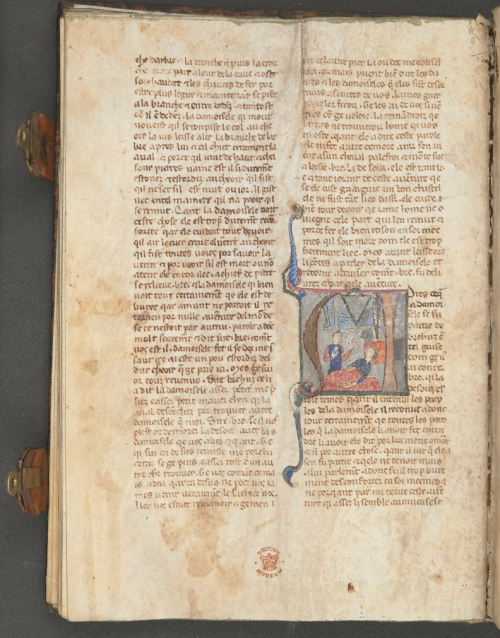 This early 15th-century Missal was produced for the Use of Cologne, as is indicated by the calendar and the offices in honour of St Severin, archbishop of Cologne. It contains 7 full-page miniatures of Rhenish execution, and added on single folios, seemingly inserted at random in relation to the text. This image of the 10,000 martyrs probably illustrates the medieval legend of the Roman soldiers, led by St Acacius, who converted to Christianity and were crucified on Mount Ararat by the King of Persia by order of the Roman emperor. They appear to be males, but the calendar of saints includes the feast of the 11,000 virgin-martyrs of Cologne, legendary companions of St Ursula, who, according to Geoffrey of Monmouth writing in the 12th century, was the daughter of the ruler of Cornwall. 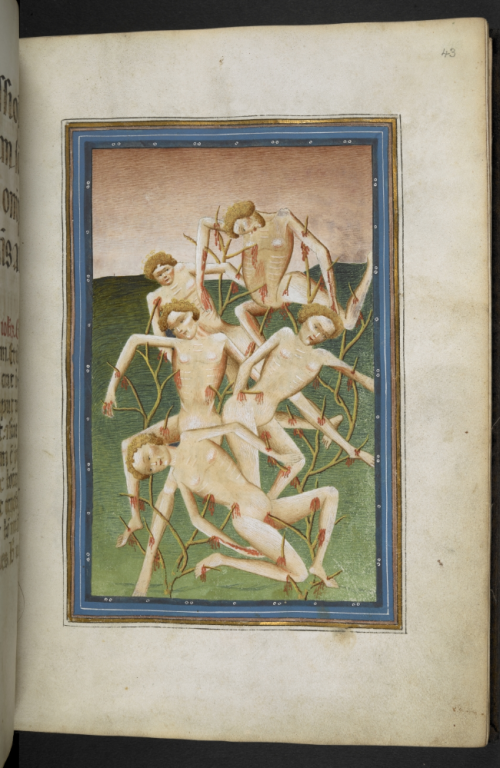 This manuscript consists of a series of black outline drawings. Every second page has a large drawing of a subject relating to Christ’s Passion at the top; below this are two drawings, usually of subjects from the Old Testament; and beneath are two further drawings of the habits of animals, including snakes, birds, dogs, wild boars, fish, an owl, an elephant and a peacock, based on classical authors. Surrounding them are busts of human figures, including prophets. On the facing pages are corresponding texts and quotations in Latin, with explanatory comments. 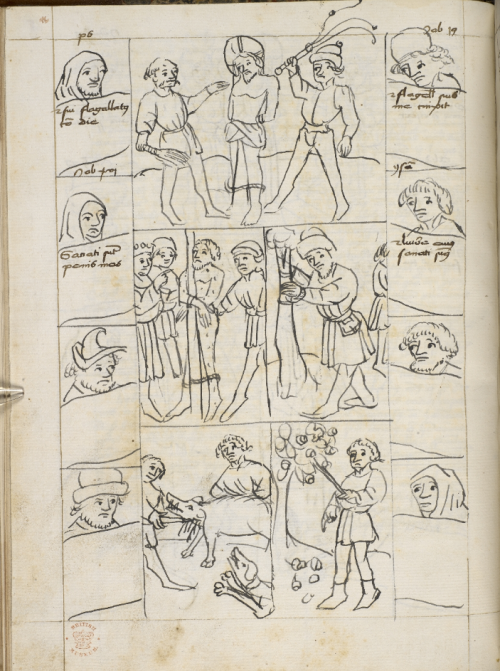 Christ is scourged, with other images including a figure tied to a tree, a wild boar being slaughtered, and a figure harvesting acorns, from the Biblia Pauperum, ?Germany, 2nd half of the 15th century: Add MS 15705, f. 10r

This herbal is a luxury copy created for Francesco Carrara II, Lord of Padua, rather than a practical, medicinal manual. Based on Arabic compilations that were translated into Latin, this treatise written in the Paduan dialect describes the medicinal properties of plants, animals, and minerals. It is accompanied by numerous illustrations of plants that appear more decorative than scientific. 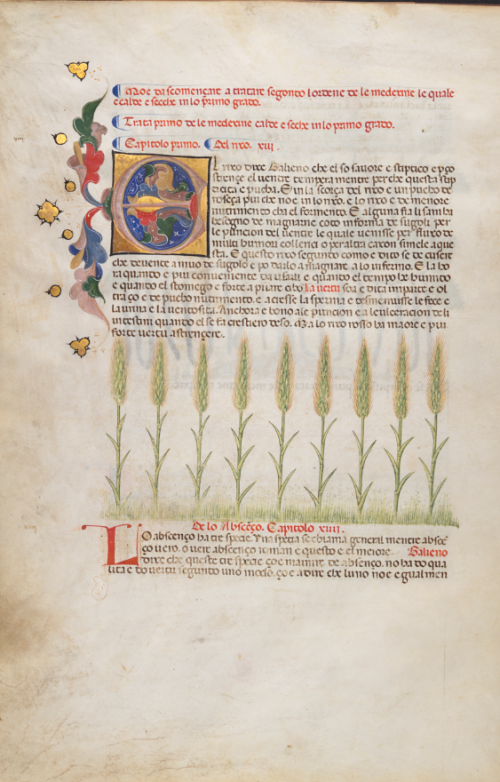 The historical Chronicles of Matthew Paris

This mid-13th century St Albans’ manuscript contains a collection of chronicles and historical material, including the Abbreviatio compendiosa chronicorum Anglie, compiled and copied in part by Matthew Paris himself. At its beginning is a collection of 32 portraits of English monarchs and other historial figures from Britain. It once included Matthew Paris’s full-page map of Britain, now kept separately as Cotton MS Claudius D VI/1. 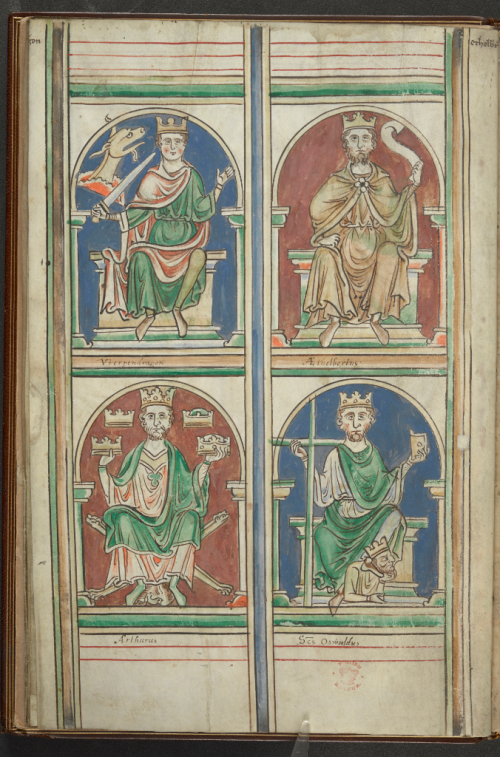 For the other manuscripts recently added to Digitised Manuscripts, please see our previous blogpost, A bumper crop of manuscripts (part 1).

Egerton 2020 contains some gems of botanical illustration. There appear to have been at least two illustrators, one of whom provided very diagrammatic illustrations based on description and one of whom obviously worked from living plants, and rendered them very literally, so the diagnostic details are actually better than Fuchs' printed herbal. 15r (Medicago), 26r (garden pea) and 33r (Convolvulus) are particularly notable. Whoever did these was not able to finish the work.