A calendar page for September 2018

Spears to the ready! It’s time to go on a hunt. So says a calendar page for September, made over one thousand years ago. You can read more about this calendar in the first of our series of posts about it this year, and soon you can come to see it in person at our Anglo-Saxon Kingdoms exhibition. 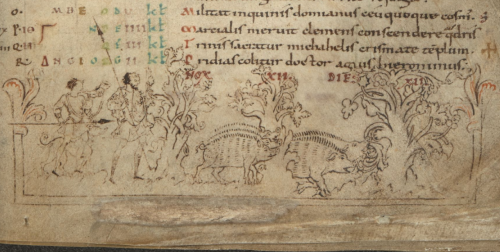 Detail of a scene with hunters and pigs: Cotton MS Julius A VI, f. 7r

This calendar is one of only two calendars from Anglo-Saxon England that are illustrated with scenes of daily life (the other is in Cotton MS Tiberius B V/1). For the preceding months these scenes have tended to focus on agriculture, but for September the artist has drawn a hunting scene. Two men with spears, a hunting horn and a dog follow a group of boars or possibly domestic pigs into a forest of sinuous trees. The oblivious pigs, meanwhile, munch on items hanging near the base of the trees. This scene nicely matches a description in an Old English riddle from the Exeter Book on Creation/the World/the Universe:

‘I am bigger and fatter than a fattened swine,
a swarthy boar, who lived joyfully
bellowing in a beech-wood, rooting away …’ (translated by Megan Cavell) 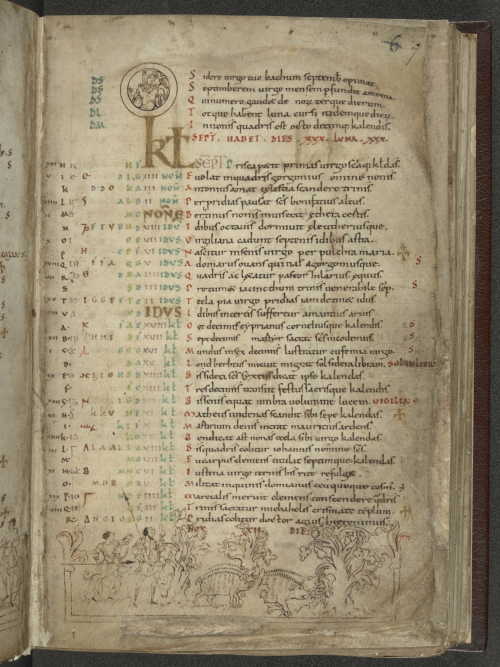 This page is also notable for containing the only depiction of a woman to feature in this calendar. She represents the astrological sign Virgo and appears in a roundel at the top of the page. She is shown holding a plant. Her dress seems to be that of an 11th-century English woman: she wears a veil on her head and has flowing sleeves. 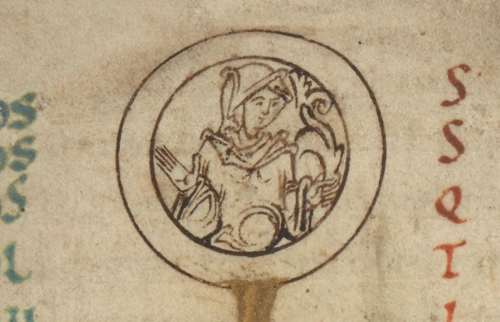 The absence of women elsewhere in the calendar is puzzling, since women would have participated in many agricultural activities. For example, notes on farming equipment, produce and workers from early 11th-century Ely mention dairymaids and other women working on farms. Women also attended feasts, such as the one depicted in the calendar page for April. Even the poem Beowulf — not noted for its gender representation — mentioned women attending a feast, including Queen Wealhtheow and her maidens. 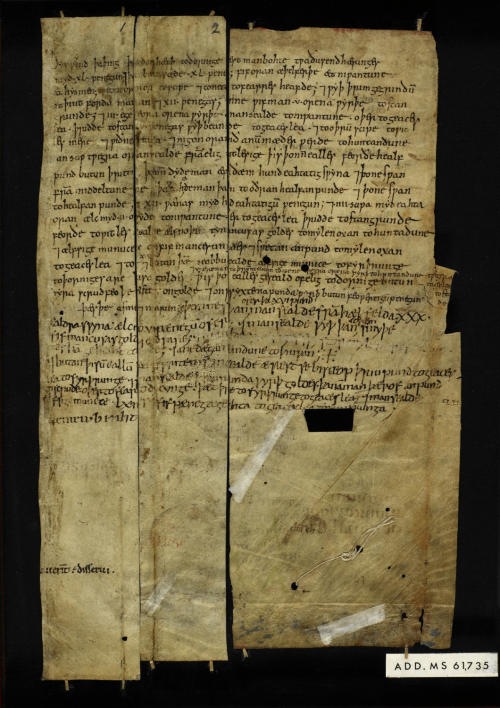 The absence of women elsewhere in the calendar is perhaps puzzling. The only other surviving calendar from Anglo-Saxon England that is illustrated with agricultural and pastoral scenes (Cotton MS Tiberius B V/1) does not include women, either. Perhaps these artists were working from models that did not feature women. Additionally, it is tempting to speculate that these images conveyed a spiritual meaning as much as depicting contemporary activities: scenes of ploughing and harvesting were well-known Biblical metaphors. It is therefore possible that female figures were excluded not because women did not play a role in 11th-century agriculture, but because women’s participation in preaching and spiritual teaching was being curtailed in some circles by the 11th century.

Detail of a verse on the feast of Michael the Archangel: Cotton MS Julius A VI, f. 7r

In addition to the artwork, this calendar features tables for calculating the day of the month, the day of the week, and lunar cycles, along with a poem with a verse for every day. Three major feast days have been marked out with gold crosses in the margin: the Virgin Mary’s birthday (8 September); the feast of St Matthew the Evangelist (21 September); and the feast of the Archangel Michael, or Michaelmas (29 September). Michaelmas continued to be an important feast throughout the Middle Ages, and its date still affects several institutions that originated in the medieval period. For example, law courts in England and Ireland and several universities in England, Wales and Scotland use Michaelmas as the start date for their terms.

The rounded of the Virgo sign for September looks as if she is holding the design with an acorn pattern at the end. The circle below looks like a child’s head so I thought it could be a representation of the Virgin sand child, not a zodiac sign. ???