My favourite Old English word — for the moment — is ‘ylp’. It means ‘elephant’. I was discussing this over lunch with my colleagues at the British Library, when someone asked a fair question: why was there a specific Old English word for elephant, when writers such as Ælfric (d. c. 1010) acknowledged, ‘Some people will think it wondrous to hear [about these animals], because elephants have never come to England’? The short answer is: elephants did not have to physically come to the British Isles to influence early medieval culture. They are a good example of the links that existed between Anglo-Saxon England and the wider world, through the exchange of books. 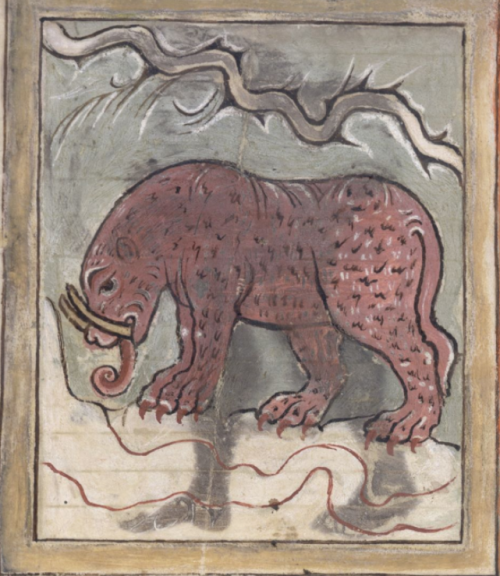 An elephant, from the Marvels of the East, in a mid-11th century scientific collection: Cotton MS Tiberius B V/1, f. 81r

Some people in the Anglo-Saxon kingdoms had travelled long distances, and if they had visited the southern Mediterranean, they may have seen elephants there. One elephant had also reportedly been given to the Emperor Charlemagne (d. 814). However, many Anglo-Saxon people had never seen an elephant, as is evident from their attempts to illustrate them. But literate people who had never left England could still encounter elephants in their books. Elephants appear in several of the classical and Late Antique texts which were available in early medieval Britain. Church fathers such as Augustine used elephants as metaphors, since their large size and apparently calm demeanour suggested stability and chastity. Such beliefs led to the motif of the noble elephant fighting the demonic dragon in later medieval art. 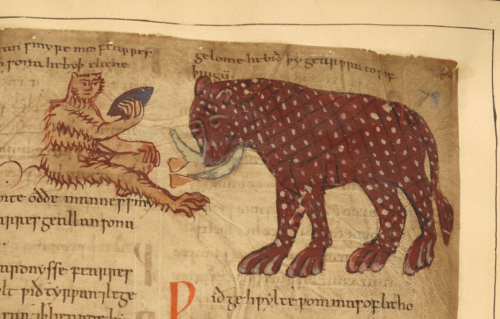 Mediterranean medical texts that circulated in the British Isles also mentioned elephants. For example, an Old English translation of the group of remedies known as the Pseudo-Apuleius complex recommended that elephants be used as a beauty product: to remove ‘disfiguring marks’ on the body, ‘take elephant bone [possibly ivory] and point with honey and apply it. It removes the marks wonderfully.’ Don't try this at home!

Based on these texts, many Old English writers understood elephants as war animals. In his sermon on the Book of Maccabees, Ælfric described how:

‘Five hundred mounted men went with every elephant, and a war-house (wighus) was built on each of the elephants, and in each war-house were thirty men … An elephant is an immense animal, larger than a house, completely surrounded with bones within its hide, except at the navel, and it never lies down. The mother carries the foal for 24 months, and they live for 300 years … and man can tame them wonderfully for battle’ (translated by Joe Allard & Richard North, Beowulf and Other Stories, 2nd edn, London: Pearson, 2012).

As a sidenote, if for some reason you ever need to ask for directions to the Elephant and Castle Underground station in Old English, according to Ælfric you should ask for ‘Ylp ond Wighus’. 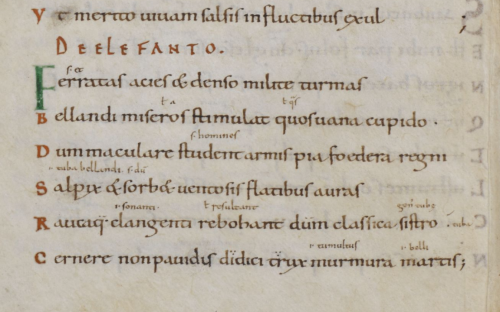 Elephants were also characterised by their military role in war in a Latin riddle composed by Aldhelm (d. 709/10), bishop of Sherborne:

‘As armoured troops and soldiers pack in tight

(Wretches who with vain lust incite a fight

A trumpet sucks in air with bursts of breeze

Aldhelm’s riddle also shows that elephants were known for more than just their skills in battle. They were also prized for their ivory. The riddle continues:

‘Although God made me ugly at my start, I picked up gifts of life once I debuted ...

I can’t be beaten by fine sheets of gold,

Although the precious polished metal’s decked

With gleaming gems and stylish luxuries.

Nature won’t let me kneel when I feel old

Or rest my eyelids while on bended knees.

Indeed, I have to spend my life erect.’

Elephant ivory may have been known in the Anglo-Saxon kingdoms. It has been detected in some 6th-century bag frames, although walrus ivory is more common.

Beyond copying texts that mentioned elephants as metaphors or resources, many Old English writers were fascinated by them out of a sense of wonder that such creatures could exist. Ælfric marvelled at their size, and both he and Aldhelm believed that elephants never sat down.

A text that exists in both Latin and Old English versions, known as the Marvels of the East, similarly presents elephants as a wonder. It claims that elephants stand 15 feet high with a ‘long nose’ covered in black hair. It also states that they are plentiful in India. The artists who illustrated two copies of this text did not pay much heed to this description. One artist portrayed a pink-skinned elephant with a long tongue and tusks, instead of a long nose, as shown at the start of this blogpost. Meanwhile, the artist of the Marvels of the East in the Nowell Codex (which also contains Beowulf) drew elephants in a way that is suspiciously reminiscent of the way they also illustrated camels. 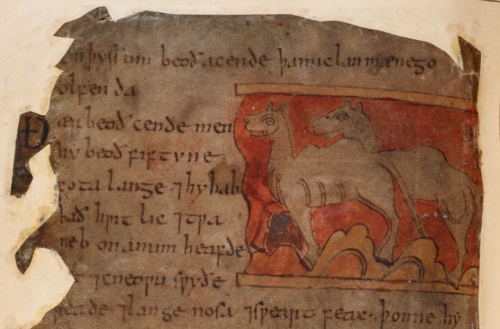 Elephants probably did not arrive in England for several more centuries. The earliest recorded elephant in England is the gift that King Louis IX of France presented to King Henry III of England in 1255. The chronicler Matthew Paris was on hand to illustrate and to describe it, claiming that ‘we believe [it was] the only elephant ever seen in England …’ But even before that, elephants had already had a significant impact on English literature and culture.

Would you like to learn more about the earliest English literature and its connections to the wider world? You can find out more on our Discovering Literature: Medieval site. And don't miss our Anglo-Saxon Kingdoms exhibition, on show at the British Library from 19 October 2018 to 19 February 2019.