The 870s were probably not King Alfred’s favourite decade. His brother, King Æthelred I had died after Easter 871, and Alfred became king in the middle of fierce fighting with viking forces. According to entries in the Anglo-Saxon Chronicle, compiled later in Alfred’s reign, West Saxon forces fought no fewer than nine battles that year alone. Alfred himself may have narrowly avoided capture. The rest of the decade did not go much better. His kingdom remained under attack as two ‘great armies’ advanced across the island, while neighbouring Anglo-Saxon kings were killed or disappeared. 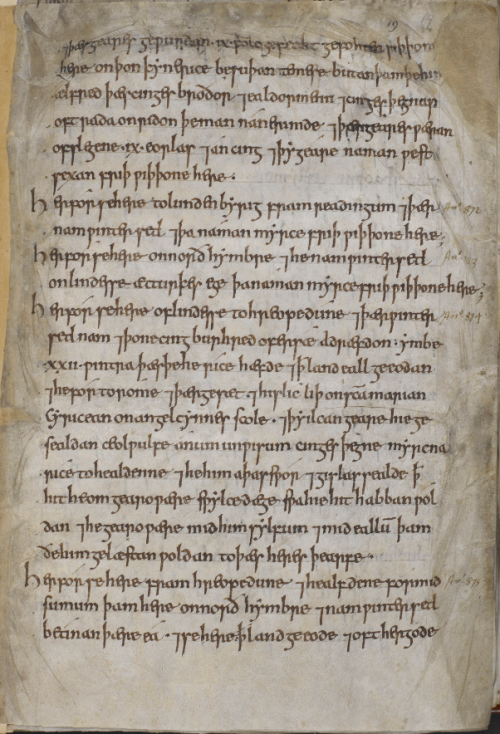 Entries for the years 872-876 in the second-oldest manuscript of the Anglo-Saxon Chronicle: Cotton MS Tiberius A VI, f. 19r

Remarkably, a document survives on a single sheet of parchment from these turbulent early years of Alfred’s reign. It is one of only three documents in Alfred’s name that survive in copies made during his lifetime: the others are British Library Cotton MS Augustus II 28 and Canterbury, DCc/ChAnt/F/150 (formerly D. & C., Red Book no. 11). This particular document records how, in 873, the archbishop of Canterbury sold land at Ileden in Kent to a man called Liaba for 25 gold coins, apparently with King Alfred’s permission:

‘In the name of the nourishing, three-part divinity, I, King Alfred, with the consent and permission and advice of my wise counsellors, in hope of eternal reward. I, Æthelheard, archbishop, and all my household from Christ Church give to Liaba, Birgwine’s son, [the land that] we call Gilding … for 25 coins of good gold ...’

This charter gives an important insight to events besides warfare that were taking place in Alfred’s domains, events which were often omitted from the Anglo-Saxon Chronicle’s panicked narrative for the 870s. Land was still being bought and sold. The church at Canterbury may even have been motivated to sell off their property to pay for extra defences, as has been suggested by Susan Kelly and Nicholas Brooks.

This charter also suggests that Latin learning had somewhat declined at Canterbury, or at least that documents were being written by people whose grammar and syntax left something to be desired. Charters produced at Canterbury had shown a decline in the quality of Latin and handwriting since the reign of Æthelwulf, Alfred's father; but this particular charter-writer made some spectacular errors. The first sentence is missing a verb. It starts out as though it were a charter issued by King Alfred, then switches suddenly to record a sale by the archbishop of Canterbury. Did the writer start writing one document and then change his mind? The writer routinely swapped ‘b’ for ‘u’, writing ‘obserbe’ instead of ‘observe’ (obserbare for observare). He also used ð, a symbol used to represent the ‘th’ sound, for ‘d’, even though the ‘th’ sound did not really exist in Latin. Most jarringly, the scribe occasionally replaced words in common phrases with something that sounded similar but does not quite make sense. For example, he tried to warn that anyone who contravened the terms of this sale would have to ‘give his account before the Lord’ (coram Deo … rationem reddere). However, he instead wrote ‘sciad se rectum redditurum coram a Deo’, which could be uncharitably interpreted as ‘render his bottom/intestine before God’. The charter-writer also copied the witness-list from older sources, so it includes several people who were long dead by 873.

Detail of Stowe Ch 19, including the Old English addition in a darker ink

That said, while the script of the charter may not have been the finest and the Latin not the most grammatical, it was still valued. Soon after it was made, a different hand added in English, ‘Leafa [another spelling of Liaba?] bought this charter and this land from Archbishop Æthelred and from the community at Christ Church, with the freedom as that given to Christ Church, in perpetual possession’. On the back of the document, a contemporary scribe wrote, ‘This is the charter for Gilding’, so that it could be easily identified.

The dorse of the charter: Stowe Ch 19

After the rocky start to his reign, Alfred’s fortunes improved. He won major battles and secured his territories. There was such a revival of learning in the 890s that Alfred’s name became associated with one of the first major flowerings of English literature.

The British Library's Anglo-Saxon charters have now been added to our Digitised Manuscripts site. To learn more about Alfred and the later part of his reign, please come to our major exhibition, Anglo-Saxon Kingdoms, which opens at the British Library on 19 October 2018.