Magical manuscripts in the Spellbound exhibition

The exhibition Spellbound: Magic, Ritual & Witchcraft is now open at the Ashmolean Museum in Oxford. Among the other exhibits, it features a selection of spellbinding manuscripts on loan from the British Library, revealing attitudes to magic in the Middle Ages. 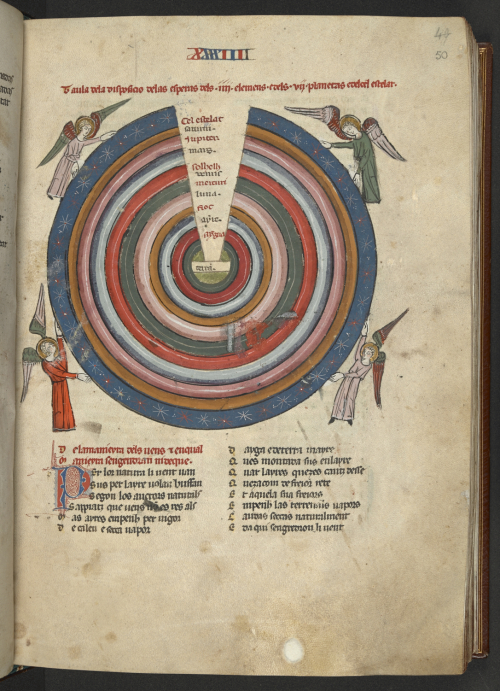 Medieval beliefs in magic were closely linked to people’s understanding of the order of the universe. Classical and medieval science envisioned the universe as a series of rotating concentric spheres, as pictured in this cosmological diagram in a 14th-century French manuscript. Earth was at the centre of this scheme, surrounded by the seven spheres of the ‘wandering stars’ — the Moon, Mercury, Venus, the Sun, Mars, Jupiter and Saturn — and finally Heaven, the sphere of the fixed stars. It was thought that the motions of these spheres and the actions of the spiritual beings residing there were instrumental in influencing events on Earth. 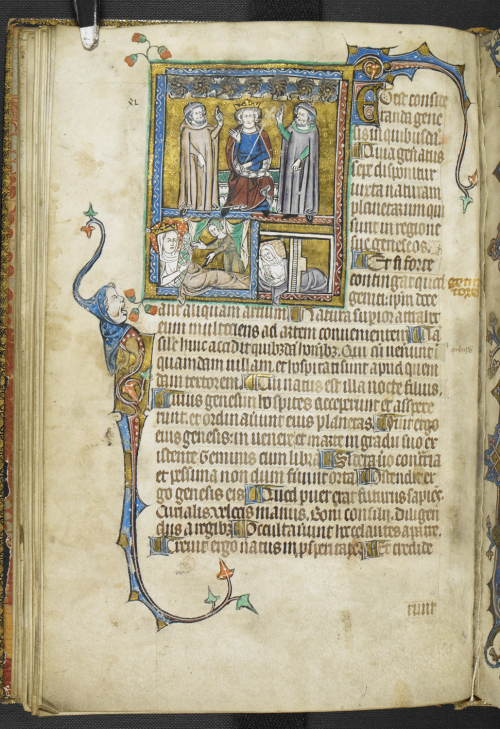 This idea is illustrated in Secretum Secretorum, a Latin translation of an Arabic treatise falsely attributed to Aristotle. The text is a ‘mirror of princes’, or guide to being a good ruler, presented as advice given by Aristotle to Alexander the Great. This manuscript was commissioned for Prince Edward (the future King Edward III, reigned 1327–1377), by the King's Clerk, Walter of Milemete. The image shown here is from a portion of the treatise discussing the importance of keeping good counsel, in which Aristotle’s character stresses the importance of astrological knowledge in selecting ministers.

Aristotle demonstrates his point with a story, illustrated in the miniature above. There was once a weaver’s son who was born under highly auspicious stars. When he grew older, the bookish boy would do nothing but study history and science. Eventually he became a government minister and managed the affairs of kings. Another boy was the son of an Indian king, but the stars at his birth foretold that he would become a smith. Although his father tried to give him a princely education, the boy was interested only in smithing, and he went on to produce the finest swords in all of India.

In the miniature, Alexander listens to the advice of two astrologers. Each points to the stars and to a birth scene, one royal and one humble. The gestures of the astrologers indicate that, regardless of their families’ social status, the children’s futures were written in the stars. 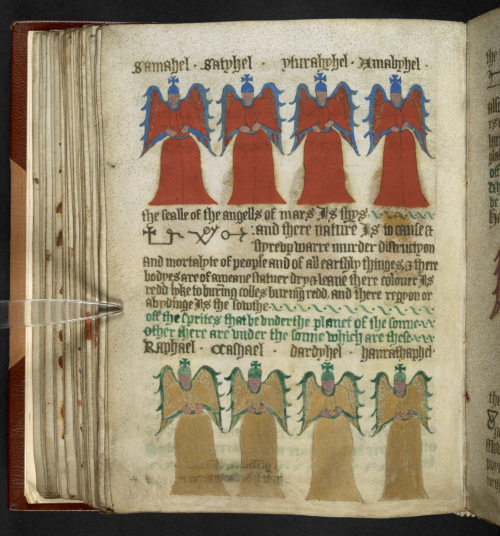 Medieval magic often attempted to harness the power of the stars more directly. This 15th-century manuscript is an English translation of the Sworn Book of Honorius, a Latin book of magic written in the early 14th century. The text explains how to summon heavenly intermediaries to do your bidding, with the page above discussing the service of the angels of the seven spheres. Accompanying this passage are illustrations of the red angels of Mars, Samahel, Satyhel, Ylurahyhel and Amabyhel, whose 'nature is to cause and stir up war, murder, destruction and mortality of people and of all earthly things'. Alongside them are the friendlier golden angels of the Sun, Raphael, Cashael, Daryhel and Haurathaphel, whose nature is to 'give love and favour and riches to a man and power also to keep him hail and to give dews, herbs, flowers and fruits in a moment'. The text emphasises that this magic is entirely Christian and virtuous, asserting that the spirits would never answer the requests of the wicked. 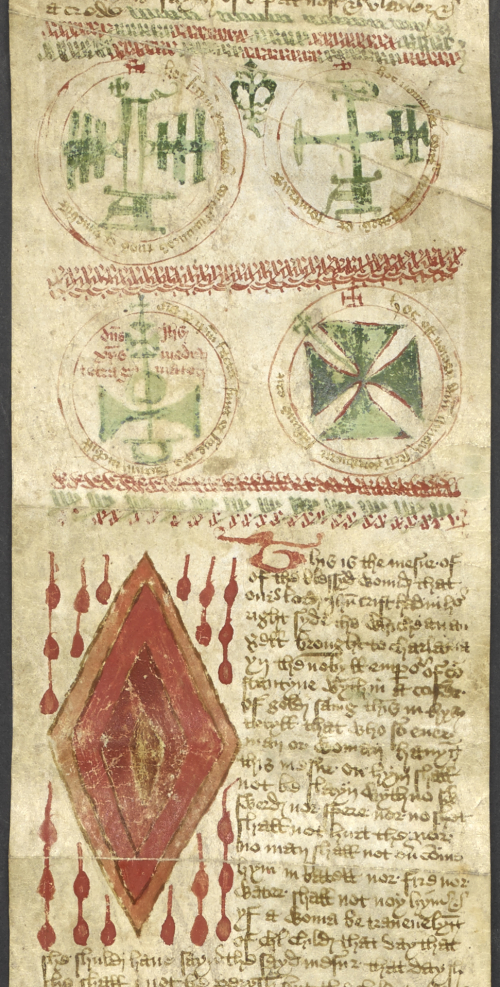 Magical materials were widely adapted for different uses. The circular diagrams in this 15th-century English roll are closely related to those found in collections of incantations such as the Book of Honorius, but employed here as protective charms. The roll was designed to be worn as an amulet for personal protection. Of the four magical diagrams shown here, the first gave protection against enemies, the second against storms and thunder, the third claims that ‘by it all things were made’, and the fourth claims ‘this is the name of God, whoever carries it with him will be safe’. Underneath is an image of Christ’s side-wound, demonstrating the fluid relationship that could exist between magical and devotional beliefs. 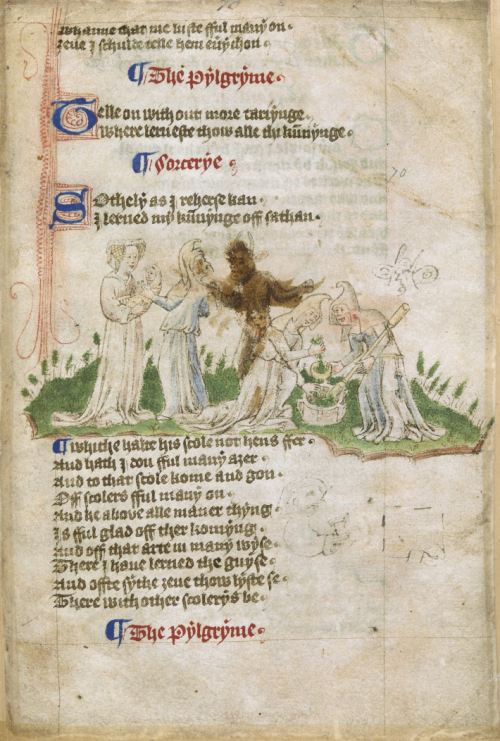 Magic was strongly criticised by many medieval commentators. The above image is a scathing representation of magic from a 15th-century copy of John Lydgate’s The Pilgrimage of Man, a verse translation of Guillaume de Deguileville's Pèlerinage de la vie humaine. In this moralising account of an allegorical journey, the pilgrim ‘everyman’ meets an old hag who, it turns out, is the personification of sorcery. This unpleasant character is peddling inscriptions, images, ointments, herbs and astrological readings, which she uses for malicious ends. The pilgrim asks her, “Tell on without more tarrying, where learnest thou all thy cunning?” “Soothly as I rehearse can, I learned my cunning off Satan”, she replies.

Specifically, she was a student at Satan's school, as depicted in this miniature. It appears that classes at Satan’s academy involved brewing green potions and abducting babies. The school fees were also notably high: when the pilgrim asks, “what gave thou him for thy cunning?”, the hag answers, “The truth, if I tell shall, my soul I gave him, whole and all”.

If you'd like to learn more about these manuscripts, we'd highly recommend that you visit the Spellbound exhibition at the Ashmolean Museum in Oxford, from 31 August 2018 until 9 January 2019. You can also view all the manuscripts described above on the British Library's Digitised Manuscripts site.