If you dished up cygnet, bittern, woodcock, plover or snipe (all protected UK species) at a modern dinner party, you would probably be arrested. However, if you had attended the wedding feast of King Henry IV in 1404, you would have been served all these once plentiful fowl. Accompanying them were meat dishes including suckling pigs, rabbit, brawn, venison and ‘great flesh’, while the fish course boasted salmon, plaice, lamprey, crayfish and ‘porpoise in furmenty’. Pastries, tarts and jellies also appeared in almost every course.

Wealthy medieval diners relished variety and novelty. They would have enjoyed two or three courses with seven to ten dishes served together. It was usual, at these great events, to mix sweet and savoury delicacies, and to serve spectacular ‘subtelties’ between courses. These were often made of sugar paste or jelly. For instance, the subtlety for the feast of the inauguration of the bishop of Salisbury in 1417 was an ‘Agnus Dei’ (a religious symbol denoting Christ, in the form of a lamb bearing a flag). That for the inauguration of the bishop of Bath and Wells in 1425 was, intriguingly, ‘A Doctor of Law’. 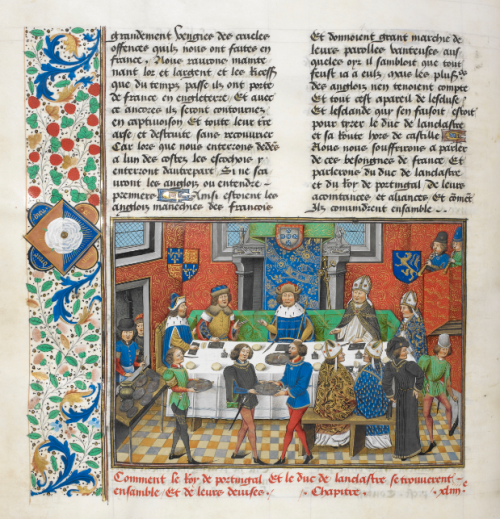 Guests await the food with bread rolls, trenchers, knives and salt already on the table, when John of Gaunt, duke of Lancaster, dined with the king of Portugal: Royal MS 14 E IV, f. 244v.

The feast of John of Gaunt is shown above. What details can be recognised? The pale brown shapes near the edges of the table are dome-topped, flat-sided bread rolls, while the attendants appear to be carrying a roast bird. We can infer yet more. Other morsels likely to feature at such an elite banquet may be guessed from late medieval menus — which survive from events like coronations, weddings and inaugurations — as well as recipe collections.

Smaller dishes could be enhanced with dyes, dressings and spices or by serving them in interesting ways. Examples can be found in a late 14th-century scroll called ‘The Forme of Cury’ (‘cury’ is Middle English for ‘cookery’). 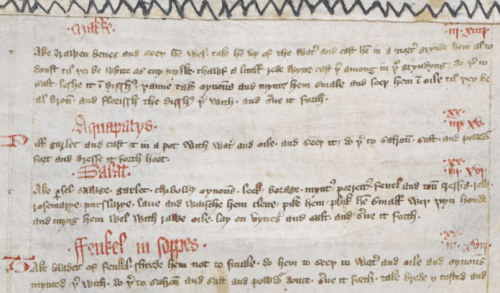 This manuscript includes a recipe for ‘Salat’, which combines fennel and herbs with a dressing of oil and vinegar. This would not be out of place in a modern restaurant. Another recipe is for ‘Mackerels in Sawse’. The cook was instructed to dye it green or yellow, which could be achieved using green herbs and saffron respectively: ‘Take the mackerels and cut them into pieces. Cast them in water and onions. Boil them with herbs. Colour it green or yellow and serve it forth.’ 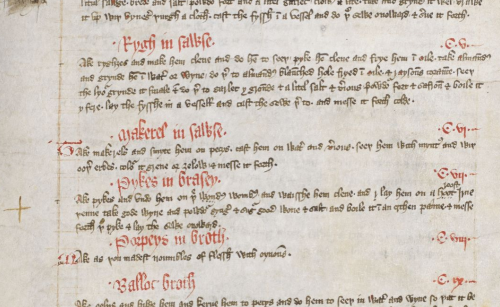 The Liber Cure Cocorum (Sloane MS 1986) includes the instruction that long, skewer-like beaks of the woodcock, snipe and curlew should be pushed through the pieces of the birds’ roasted carcasses, like ready-made kebabs.

Preparations for a feast are shown, comic-strip style, in the lower margins of the 14th-century Luttrell Psalter. At the bottom of the first image, animals, perhaps rabbits and poultry, are being roasted on a spit. In the second image, cauldrons that may contain sauces or stews are attended by a cook. Beside him, a figure appears to be chopping green herbs. This could be the popular ‘Verde Sawse’ (green sauce). Above him, another figure appears to be grinding ingredients with a pestle and mortar. 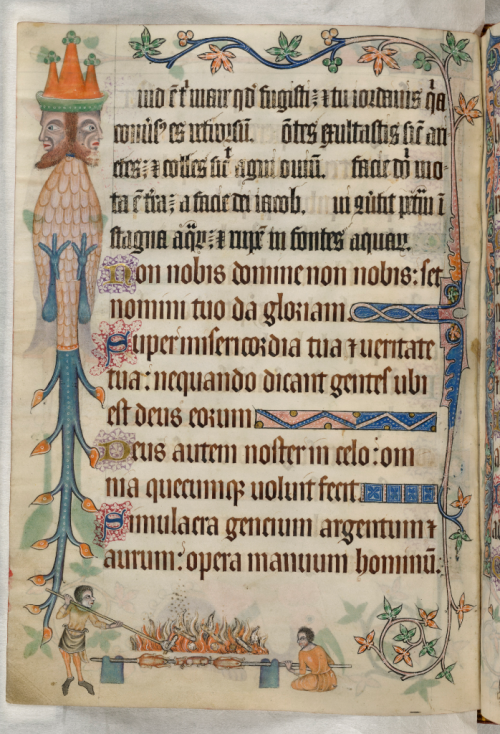 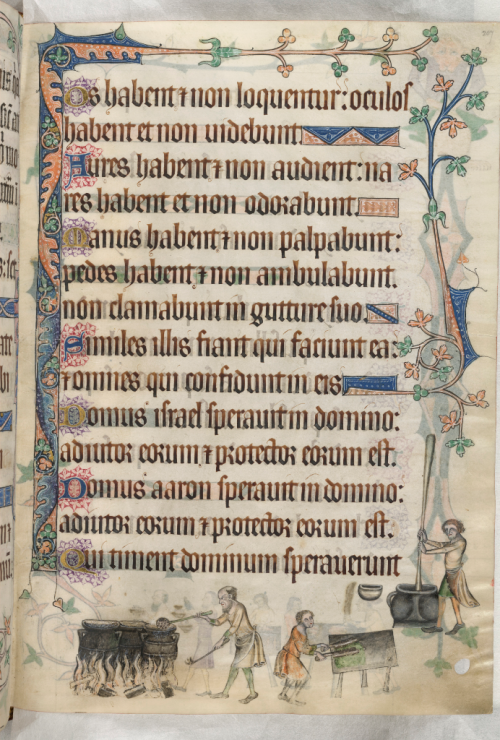 The next marginal images show the food and drink being arranged in plates and bowls on tables and being carried to the guests. A figure at the first work-table is jointing and plating up roasted meat, the same creatures as were depicted on the spit. The second table is being used to serve drink, presumably wine, from earthenware jugs into shallow bowls, known as mazers. Attendants are then shown carrying the food through on silvery plates. All the work-tables are three-legged for extra stability. In contrast, the lavish dining table on the following page is on trestles and could have been easily dismantled. 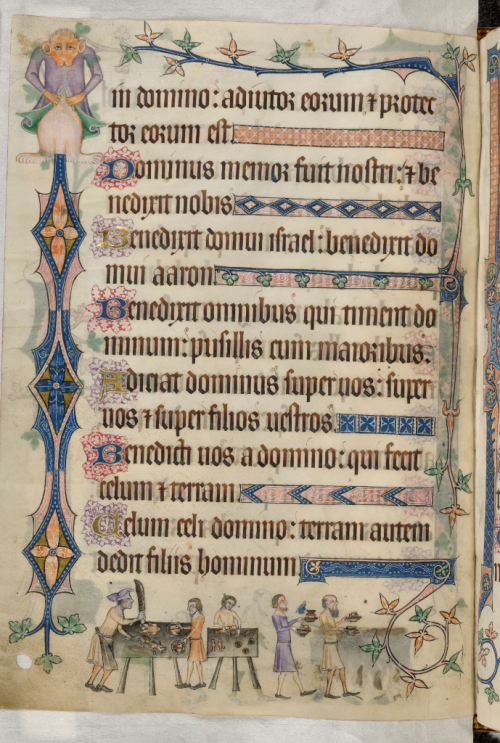 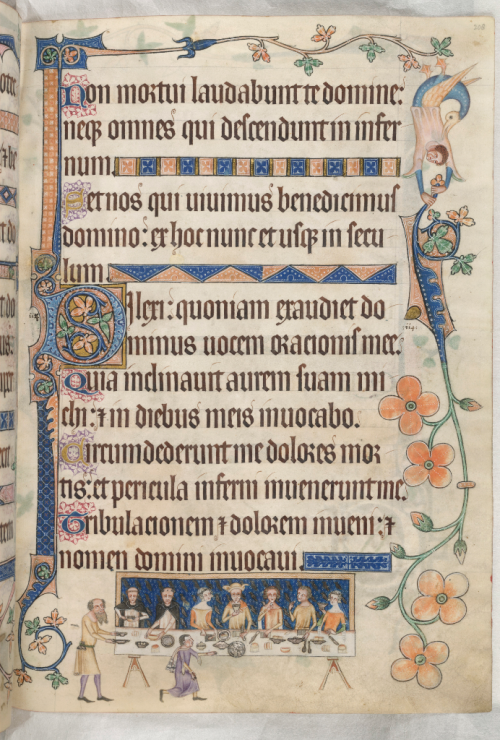 Here, the food is being served to a group of well-to-do diners, and a heraldic backdrop identifies them as the family of Geoffrey Luttrell. Geoffrey may be the figure sitting centrally. The woman to his right is cutting up a piece of meat on her trencher (originally a flat plate made of bread but sometimes wooden by this period). In front of the table, a servant is shown with a towel around his neck, ready for the hand-washing before and after the meal.

There is no denying that a magnificent medieval feast would have been a dazzling and highly crafted affair, even by today’s standards. Perhaps it would not have been so alien an experience after all … give or take the odd porpoise, sugar-paste martyrdom or self-skewered woodcock.

Nice piece, so I’m sorry to cavill, but I’m afraid your intro is inaccurate. Neither woodcock nor snipe are protected species in the UK. Both are considered game species, so shooting is regulated, with strict closed seasons, and preserved (by landowners, their gamekeepers and so on) but it is most certainly legal. The exception is the Jack Snipe, which is indeed completely protected.

What a super post, and I do love the Luttrell Psalter. The grotesque in the upper left of the penultimate page appears to be 'flashing' the border - definitely something to be proud of.
Do the illustrations have anything to do with the text?