A letter of a Scottish rebel

In early January 1489, Alexander Gordon, master of Huntly, wrote from Edinburgh to the king of England, Henry VII (1485–1509), soliciting his support against the government of his own king, James IV of Scotland (1488–1513). Alexander's letter is preserved in the Cotton collection at the British Library, and is one of only a small number to survive from late medieval Scotland. The scribe wrote this letter in Scots, in a pre-secretary hand; the master of Huntly himself then ‘subscribit’, sealed and sent it to the English monarch.

The master of Huntly was the eldest surviving son of George Gordon, second earl of Huntly, and his second wife, Annabella Stewart, sixth daughter of James I, king of Scots (1406–1437). The earl of Huntly was the most powerful nobleman in North-East Scotland. He had opposed his nephew James III, king of Scots (1460–1488), during the late 1470s and early 1480s, culminating in his participation in the seizure of the king at Lauder in July 1482, when ‘ye lordis of Scotland … slew ane part of ye kingis housald and other part yai [they] banysyt [banished] … for he wrocht [valued] mair ye consaell of his housald yat war bot sympill na [that were but lowly than] he did of yame yat [them that] was lordis’ (Royal MS 17 D XX, f. 308r). Several other uncles of the king, including James Stewart, first earl of Buchan, played a leading part in imprisoning him and taking power, probably in support of James III’s exiled brother, Alexander Stewart, first duke of Albany, who invaded Scotland with the support of an English army. Huntly changed sides and helped the king to recover his authority and to send Albany and Buchan into exile.

From the mid-1480s opposition to James III focused on his eldest son, James Stewart, duke of Rothesay. He fled Stirling Castle in February 1488 to join rebels in the South-West led by the Hepburn and Hume families, and then demanded greater authority as heir to the throne. Rothesay’s mother, Margrete of Denmark, was said to have admonished him on her deathbed: ‘nothing achieved by violence, be certain, can endure’ (Giovanni Sabadino degli Arienti, Gynevera de le clare donne, 1489–90). Despite this, the 15-year-old Rothesay entered into open civil war with his father. Huntly and the master of Huntly sided with the king, as did Buchan, who was back in royal favour. King James III was defeated and killed at the battle of Sauchieburn on 11 June, carrying the sword of his illustrious ancestor Robert the Bruce in hope of victory. Huntly and the master of Huntly had been too late to help him on the field, while Buchan had been handed over to the rebels as a hostage during a negotiated truce the previous month. James III was buried beside his queen before the high altar at Cambuskenneth Abbey. Rothesay, now crowned James IV, was present and for the rest of his life he wore an iron belt as an act of penance for the death of his father.

The government of James IV proved to be as narrow-based as his father’s It was dominated by Patrick Hepburn, first earl of Bothwell, and his kinsmen, who attacked the former supporters of the late king, among them Buchan and the master of Huntly. The master thus wrote to Henry VII of England in January 1489, soliciting his aid against those who had ‘falsly slayne’ James III. He described how, he had ‘put me in [and] divours wicht [with] my said soueraine lord [James III’s] frendis and kynnysmen to causs the comittaris of the saide slauthir [murder] to be punyst acording to Iustice and the honor of our realme’, and he petitioned Henry ‘to put to zour [your] hande … in the punyssyng [punishing] of fals and tresonable trattouris’. The master ended by saying that Buchan, Henry’s kinsman, had the authority to negotiate further terms.

The rebellion broke out at Easter 1489, concentrated in the North-East and the West, with the master of Huntly prominent among its leaders, but also a number of others who had fought against James III at Sauchieburn but now felt that they too had been excluded by ‘parciall personis’ (Edinburgh, National Records of Scotland, GD220/2/1, no. 85) from the presence of the young James IV. The rebels demanded that the killing of James III should not go unpunished, that his treasure (which had been embezzled) should be restored to the crown, and that justice should be administered. They wanted parliament summoned to settle their differences. Bothwell responded by bringing a number of them in from the cold, including Buchan, by laying siege to the strongholds of others, and by forcing battle. Fortunately, Henry VII could not intervene because he had a rebellion of his own to deal with in Yorkshire; but Bothwell failed to take the main rebel stronghold, Dumbarton Castle on the Firth of Clyde, and he was constrained to give way to many rebel demands, including the summoning of parliament. Huntly and the master of Huntly were among those restored to favour; however, James III’s killer or killers were never found, never punished, nor was all his treasure recovered. 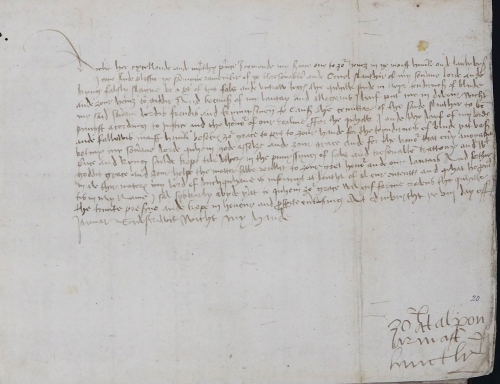 Right high excellent and mighty prince I commend my service unto your highness in the most humble and hearty way I can. And please it the same remember of the treasonable and cruel assassination of my sovereign lord and king falsely slain by a part of his false and untrue subjects the which stood in near tenderness of blood and your highness together. And because of my loyalty and allegiance I have put me and divers with my said sovereign lord’s friends and kinsmen to cause the committers of the said murder to be punished according to justice and the honour of our realm. For the which I and the rest of my lords and fellows most humbly beseech your grace to put to your hand for the tenderness of blood that be between my sovereign lord whom God absolve and your grace and for the honour that every anointed prince and king should keep to others in the punishing of false and treasonable traitors and with God’s grace and your help the matter shall be settled to your great honour and our loyalty. And further in all there matters my lord of Buchan is informed at length of all our intents and what he promise it is in my name I shall certainly abide thereat to whom your grace will give firm credence. The which the Trinity preserve and keep in honour and prosperity everlasting. At Edinburgh the 8 day of January. Subscribed with my hand

Yours at all power