In 1490, the curate of St Theodor in Basel, Switzerland, began compiling a register of the baptisms he performed at the church. The handwritten portion of the manuscript begins with a note in his hand: it records the year, 1490; the purpose for which the register was kept (‘ad inscribendum pueros baptisatos’); and his name, Johann Ulrich Surgant. The first entry, underlined in red, is for a baptism performed on 13 July, the feast day of St Henry (also known as Henry II, Holy Roman Emperor): a boy named Henry Falkner – after his father, it seems, rather than his beatified namesake. 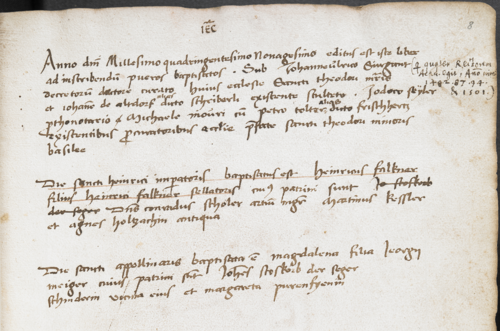 Detail of the opening entries in the baptismal register of the church of St Theodor, Basel: Egerton MS 1927, f. 8r

This register was maintained at the church for a little short of 250 years, with the last entries being made in 1737. In 1620, when the volume begun by Johann Ulrich Surgant was full, a second one was acquired. These two manuscripts – Egerton MS 1927 and Egerton MS 1928 – are a valuable resource for anyone pursuing prosopographical or genealogical research for families in Basel across four centuries. You can also study them in detail on the British Library's Digitised Manuscripts site. Printed page from a Missale Basiliense, containing the ceremonies performed in preparation for the use of the baptismal font: Egerton MS 1927, f. 7r

Surgant evidently sourced the blank volume locally. Inserted at the beginning are several printed pages from a Missale Basiliense printed by Michael Wenssler in 1488 (the British Library holds a complete copy at IB.37136; ISTC im00651500). These comprise a calendar, with the main religious feasts printed in red ink, and the ceremonies and prayers performed in preparation for the use of the baptismal font. These contents were of obvious utility in such a volume and illustrate that the book was designed and acquired with this specific purpose in mind. 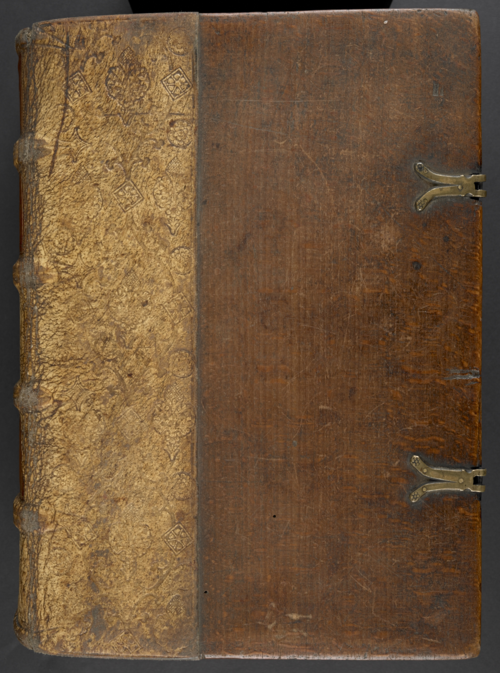 The cover is characteristic of late 15th-century Swiss bindings, with blind-stamped pigskin covering a third of the front and back oak boards. Using the Einbanddatenbank, it is sometimes possible to identify the craftsman responsible, but in this case, none of the tools used on the covers of Egerton MS 1927 are a match for known binders or workshops in that region.

These registers are of particular interest to anyone studying the protestant religious communities in Switzerland during the 16th century. The martyrologist John Foxe (b. 1516/17, d. 1587), of Acts and Monuments fame, spent at least four years of his exile in Basel, before returning to England in October 1559. The earliest evidence of his arrival in the city is an entry in this very register, on 22 September 1555: ‘to John Foxe, the Englander, a child, called Christiana’. Along with other Marian exiles, Foxe rented rooms in the Clarakloster, a former convent. The first of his daughter’s godparents was a fellow resident: Thomas Bentham (b. 1513/14, d. 1579), who became Bishop of Coventry and Lichfield under Queen Elizabeth I.