A calendar page for October 2018

It's October! That means it is only 19 days until the British Library's ­Anglo-Saxon Kingdoms exhibition opens. Visitors will see a treasure trove of manuscripts, from spectacular art to early examples of English literature. Book your tickets now!

You’ll also be able to see this calendar, made in England over 1000 years ago. Of course, the makers of this manuscript did not anticipate that — a millennium later — the opening of an exhibition in London would be important, and so they didn’t mention ‘exhibition viewing’ as the ultimate October activity. Instead, hawking and falconry are depicted on the page for October. 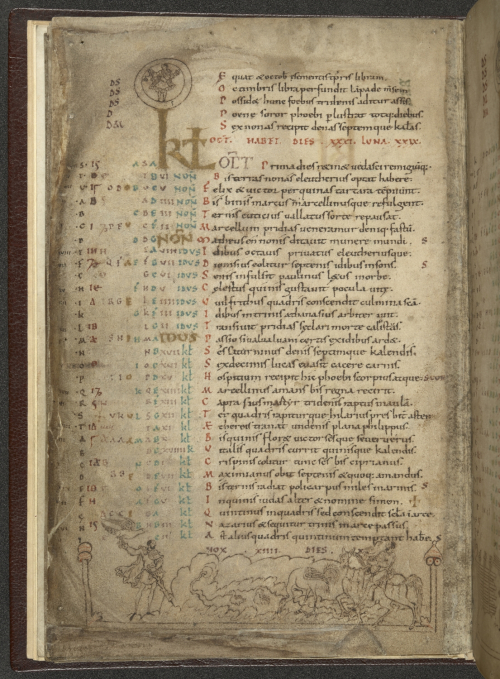 A calendar page for October, made in England in the mid-11th century: Cotton MS Julius A VI, f. 7v

Falconry was a popular pastime throughout the Middle Ages, and has been illustrated in most of the previous calendars featured on this blog, albeit at different months. 11th-century English noblemen who enjoyed hawking may have included King Harold II, who was depicted with a hawk on the Bayeux Tapestry. After the Norman Conquest, Earl Hugh of Chester may have arranged his entire property portfolio around hawking: records of his lands in Domesday Book include an above-average number of hawks and deer parks. (Did we mention that Domesday Book will also be on display in the Anglo-Saxon Kingdoms exhibition?) 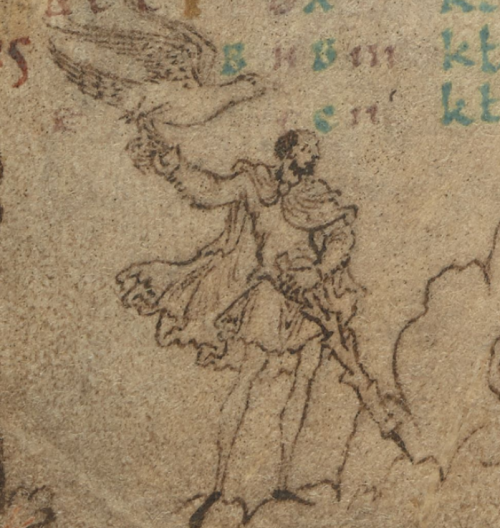 Detail of a man with a bird, Cotton MS Julius A VI, f. 7v

A striking feature of the hawking scene in Cotton MS Julius A VI is how recognisable the birds are to a modern eye. While the artist(s) of this calendar depicted plants and trees in a highly stylized manner, the birds in these images look very similar to ducks and cranes today. This parallels are even clearer in the colourful image of the same scene found in another illustrated 11th-century calendar, Cotton MS Tiberius B V/1.

Detail of men hawking on foot and on horseback, from a calendar in a scientific miscellany from 11th-century England: Cotton MS Tiberius B V/1, f. 7v

The rest of the calendar contains the usual astronomical, astrological and time-keeping information. Libra is portrayed as a man wearing a cloak and holding scales in a roundel at the top of the page. There is only one feast-day marked out with a gold cross: the feast of St Simon and St Jude on 28 October. Today these saints are considered to be the patrons of lost causes. 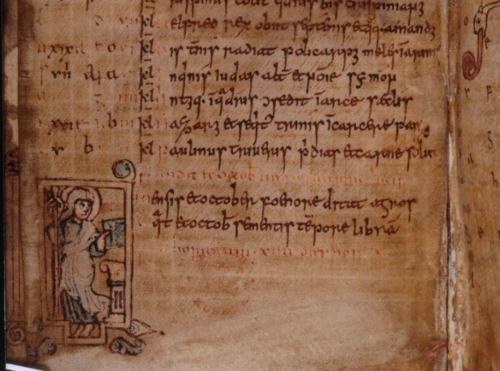 Alfred mentioned in the calendar (first line in the image) that was added to a Psalter in England in the early 10th century: Cotton MS Galba A XVIII, f. 12v

There is someone missing from this calendar and its poem that describes every day of the year. The earliest surviving manuscript of this poem commemorates the death of King Alfred of Wessex (871–899) on 26 October. The calendar in Cotton MS Tiberius B V/1, which was made in the 11th century, also commemorates Alfred. But the mid-11th century Julius Work Calendar does not, nor does it commemorate the death of Alfred’s wife, Ealhswith, on December 5.

There are several possible explanations for this omission. First, the scribe of this calendar could have been copying an earlier version of the poem, perhaps composed before Alfred and Ealhswith died. Alternatively, Alfred and Ealhswith could have been replaced in later versions of the poem. While Alfred the Great is arguably the best known Anglo-Saxon king today, he was not necessarily so well remembered in the centuries after his death. In the mid-11th century, his grandson Æthelstan and his great-grandson Edgar were the kings who were fondly remembered in speeches and chronicles. Moreover, these calendars were probably made at monasteries, and specific monasteries took different views of Alfred. While Alfred and his wife were well-remembered in the history of the New Minster, Winchester (where they were buried), the monks of Abingdon in Oxfordshire believed that he had stolen from them.

Instead of Alfred, on 26 October this calendar commemorates the deaths of Maximian and St Amand (Amandus). Amand (d. 675) was a bishop who founded monasteries in Ghent and elsewhere in Flanders, and these churches had close links to English houses in the 10th and 11th centuries. Amand is also remembered today as the patron saint of beer, brewers and bartenders.

To learn more about all these people — and to see some of the books associated with Alfred, Ealhswith and Æthelstan — please come to the British Library’s Anglo-Saxon Kingdoms exhibition between 19 October and 19 February. It promises to be a once-in-1302-years experience.