A few months ago, when it was announced that Jodie Whitaker would be the new ‘Doctor Who’, we tweeted an image of a 1000-year-old school-book that anticipated this situation. It included a word for a female doctor: ‘doctrix’. 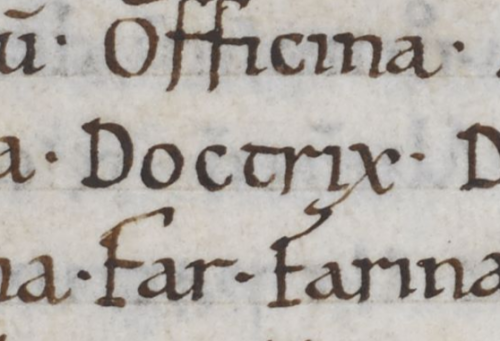 The main text of this manuscript contains excerpts from a Latin grammar by the North African scholar Priscian (fl. c. 500). This was one of the standard textbooks for teaching Latin in the Middle Ages. The passage that mentions ‘doctrix’ shows how to make the feminine equivalent of masculine words. For example, rex (king) becomes regina (queen), leo (lion) becomes leona (lioness). A different ending is needed for a female doctor (teacher) or medicus (medical doctor), because doctrina means teaching and medicina means medicine. And so a female doctor is a doctrix. 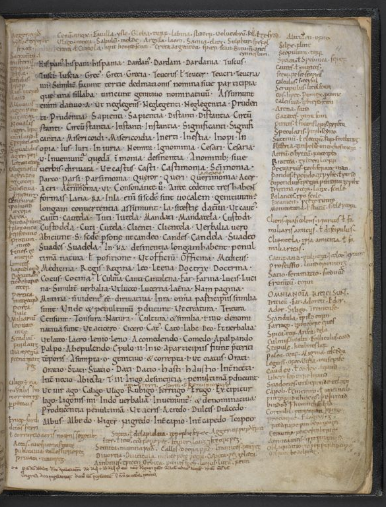 This school-book was made around AD 1000. It belonged to the monastery at Abingdon, which was a major intellectual centre. Around the edges of its pages, a student or teacher has added in vocabulary lists and even a schoolroom exercise: a dialogue designed to help young students practice their Latin.

Priscian’s Grammar was very influential in early England, and it was used by the writer Ælfric to create an English-Latin textbook and glossary. Ælfric was the most prolific Old English writer and extremely influential. You can learn more about him in the British Library's upcoming Anglo-Saxon Kingdoms exhibition. Ælfric's Grammar and Glossary is the earliest surviving textbook written in English. It includes a list of feminine forms of masculine nouns:

Ælfric was hardly a feminist: he probably included all these female equivalents just to show off his Latin. However, in his other works he did write about female saints who instructed or taught, such as St Cecilia. Female leaders and teachers were prominent figures in Old English epic poetry as well: hopefully the new Doctor will get to meet some of them on her new adventures.

This 1000-year-old school-book has had its own adventures. After the Dissolution of the Monasteries in the 16th century, it seems to have been sold, with part of the manuscript ending up in the possession of Jan Moretus, a printer in Antwerp. Moretus worked for his father-in-law, Christoffel Plantin, and their manuscript collections show what sorts of script they were interested in, as they commissioned new typefaces from the French designer Robert Granjon. One of these typefaces — which resembles the Caroline-style script of 11th-century English manuscripts — became the basis for the Plantin typeface. A modified version, known as Times New Roman, was used by the Times of London from the 1930s. Times New Roman was then turned into a computer font, and it was the default font in many Microsoft programmes until 2007.

The monks of Abingdon would probably would have recognized this font. They might have been astonished by the concept of computers and televisions but, to judge by this school-book, they would not have been surprised by the idea that a Doctor could be a woman.

Posted by Ancient, Medieval, and Early Modern Manuscripts at 8:04 PM

Thank you for a fascinating blog. I should like to offer a small marginal note... There is a useful distinction in Modern English between the verb 'practise' and the noun 'practice', so 'young students practise their Latin' with an 's'.