A missal not to be missed

One of the British Library's illuminated manuscripts is now on display, with a selection of other stunning objects, at a new exhibition exploring the life and times of the powerful bibliophile duchess, Mary of Guelders (1378–1427). You can visit the exhibition, I, Mary of Guelders: The Duchess and her extraordinary prayer book, at the Museum Het Valkhof in Nijmegen, from now until 6 January 2019. Our manuscript, Egerton MS 3018, reveals the cosmopolitan connections and rich book culture of the Lower Rhine area in Mary’s day. 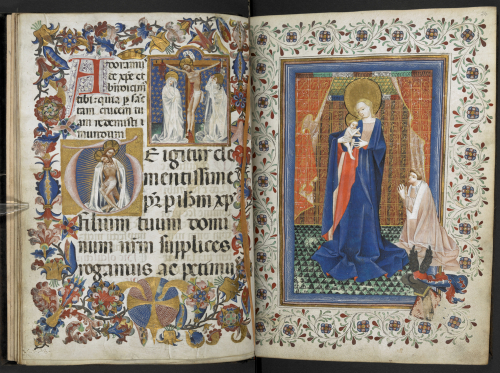 The opening of the Canon of the Mass, facing a miniature of the Virgin and Child with a patron portrait: Egerton MS 3018, ff. 23v–24r

The manuscript on loan from the Library is a missal, a service book containing the texts needed for the performance of the Mass. A close look through its pages reveals a fascinating meeting of scribal cultures. The main part of the manuscript was written and illustrated in the late 14th century by a scribe working in an Italian style, using the rounded script and smooth white parchment that were common in Italian manuscripts. It could have been made in Italy, or by Italian artisans working in the Lower Rhine area.

In the year 1400, a different scribe added a calendar focusing on saints related to Cologne, featuring ‘red letter days’ for the Three Kings (their deaths on 11 January and their translation on 23 July), the 11,000 Virgins (21 October), and St Severin, archbishop of Cologne (23 October), all of whom had their major shrines in Cologne. They also added an office for St Severin and a Mass dedicated to all angels. This scribe used thicker parchment, wrote in a pointed gothic script typical of northern Europe, and decorated their initial letters with a Dutch type of penwork.

At a similar time or perhaps slightly later, an artist added seven Rhenish-style full-page miniatures depicting various saints. With their full-length figures, flat backgrounds and minimal narrative, these miniatures closely resemble the types of devotional panel paintings commonly displayed in churches at this time. They were probably added at the request of a new owner, probably the man pictured in the image above, praying before the Virgin and Child at the opening of the Canon of the Mass. 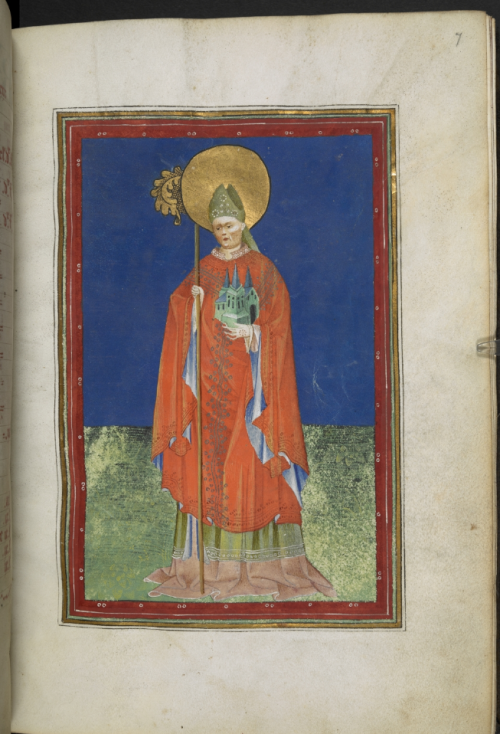 Some of the saints included were widely venerated while others were local to the Lower Rhine area. This miniature shows a saint holding a church, identified as a bishop by his mitre and crosier. He is probably intended to represent St Severin, the 4th-century bishop of Cologne whose feast day is prominently marked in the manuscript’s calendar and commemorated with an office in the manuscript’s sanctorale section. The church he carries most likely represents his foundation and shrine site, the Basilica of St Severin in Cologne. It was the city’s second major cult focus after the Shrine of the Three Kings at the Cathedral. 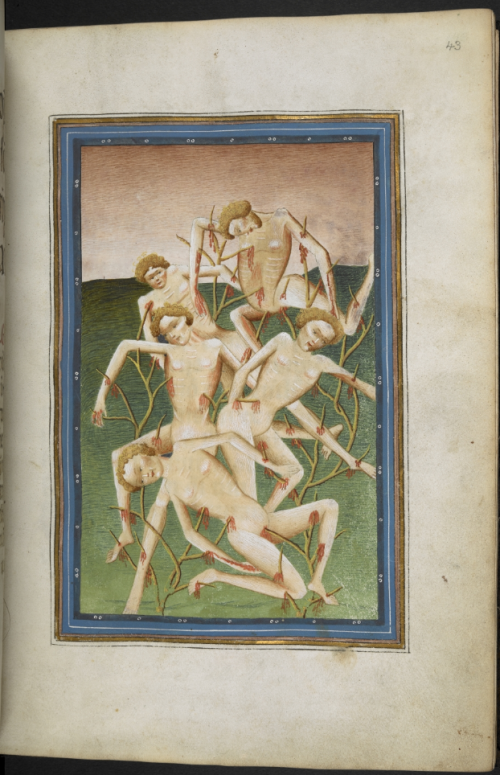 Another unusual image in this manuscript depicts the Ten Thousand Martyrs, said to have been a group of Roman soldiers led by St Achatius, and who were impaled to death by a pagan army. This relatively obscure cult is particularly associated with Switzerland and Germany, and relics were claimed by Cologne, Prague and other towns. According to legend, whoever venerated their memory would enjoy health of mind and body. Perhaps to emphasise their powers over bodily health, this gruesome miniature focuses on the martyrs’ bodily suffering, showing them as a mass of contorted naked bodies, violently impaled and pouring with blood.

We are delighted to be a lender to the Mary of Guelders exhibition, which is on in Nijmegen from 13 October 2018 to 6 January 2019.