When we say the early medieval period was a golden age of art, we mean that literally. Skilled craftsmen made intricate golden jewellery, belt buckles and sword fittings. Kings such as Offa and Coenwulf of Mercia issued gold coins. Books, too, were covered with gold, inside and out: some of the most precious books were given jewelled treasure bindings. You can find examples of all of this at the Anglo-Saxon Kingdoms exhibition at the British Library (on until 19 February 2019), including two manuscripts written entirely in gold, as well as objects from the largest hoard of Anglo-Saxon gold ever found. 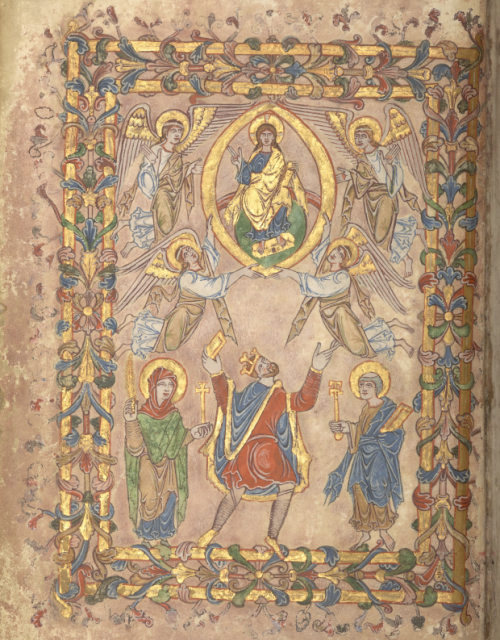 Detail of King Edgar from a charter for the New Minster, Winchester, 966: Cotton MS Vespasian A VIII, f. 2v

Gold was used in highly illuminated manuscripts relatively early in the Anglo-Saxon period, as in Ezra's golden halo in the Codex Amiatinus, and the names written in gold and silver in a Northumbrian monastery's book of benefactors. Indeed, one 8th-century gospel-book is known as the 'Codex Aureus' because of the lavish gold writing and gold backgrounds on some of its pages. Its pages alternate purple-plain-purple-plain. According to an inscription on one of the gilded pages, this book was seized by a viking army in the 9th century, but the nobleman Ælfred and his wife Werburg 'acquired these books from the heathen army with our pure gold'. 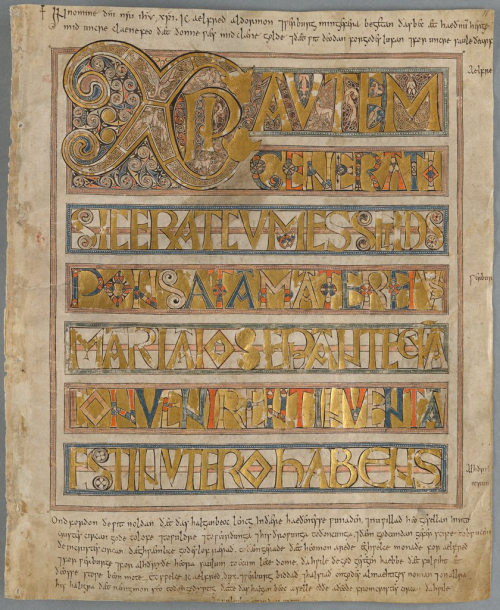 Page with inscription about Ælfred and his wife Werburg: National Library of Sweden, MS, A 135, f. 11r

Gold was very heavily used in illuminations from the 10th and 11th centuries, as artists and their patrons demonstrated their devotion to God. 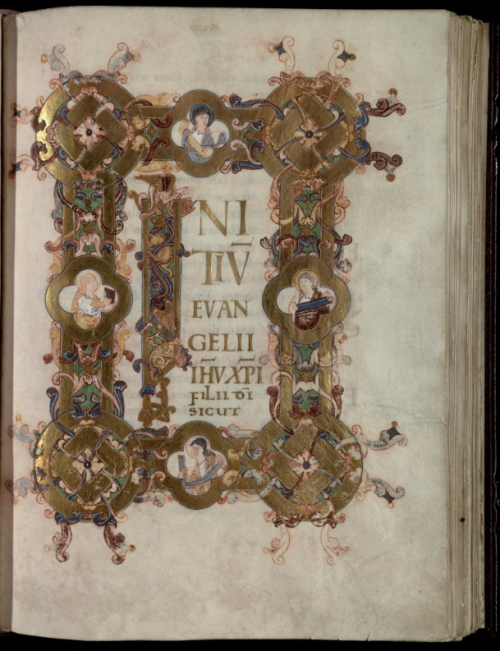 One surviving manuscript from the Anglo-Saxon kingdoms was written entirely in gold. This is an unusual charter for the New Minster, Winchester, issued in 966. It begins with an image of King Edgar, flanked by St Peter and the Virgin Mary, offering a golden book to Christ. You may recognise this manuscript from the exhibition poster. This is followed by 60 pages of text, all in gold. 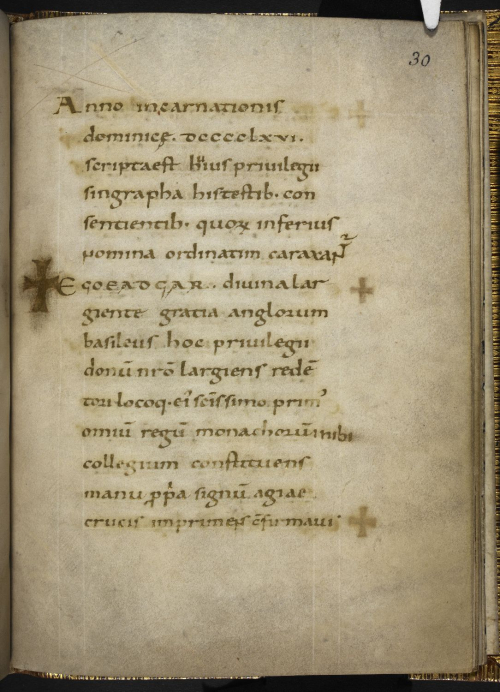 Beginning of the list of witnesses: Cotton MS Vespasian A VIII, f. 30r

This dramatic document was made in the aftermath of a dramatic event. When the reformer Æthelwold became bishop of Winchester in 963, he expelled those clerics who refused to become monks from the two biggest churches in Winchester: the Old Minster (now Winchester Cathedral) and the New Minster, which later became Hyde Abbey. The expulsion was controversial, and some disgruntled clerics even tried to poison Æthelwold. The situation in Winchester may have still been unstable in 966, when King Edgar — Æthelwold’s former pupil — issued this charter. Æthelwold himself probably composed the text. The lavish use of gold underlined the monks’ sophistication and their connections to powerful supporters such as the king. 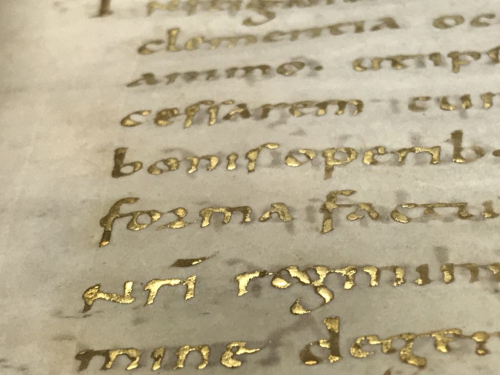 Gold could be applied to parchment in two main ways. The first involved writing/drawing in gesso (a type of glue or light cement) and then applying gold leaf to the gesso. The second way involved using powdered gold mixed with liquids to create a sort of gold ink. In the case of the New Minster Charter, the way the letters and golden details are slightly raised off the page might suggest a layer of gesso underneath (or very globby gold 'ink'). Gesso was certainly used in the lavish artwork and illuminations in other manuscripts from this period.

The other manuscript in the exhibition that is written entirely in gold — known as the Harley Golden Gospels — used powdered gold mixed with glair or gum. The decoration and text on its pages therefore appears flat. The Harley Golden Gospels were made in the Carolingian Empire in the first quarter of the 9th century. Elements of the decoration and layout of some initials in this book show connections to the art from Ireland and England. In turn, the lavish use of gold in Carolingian manuscripts may have inspired artists working in the Anglo-Saxon kingdoms. 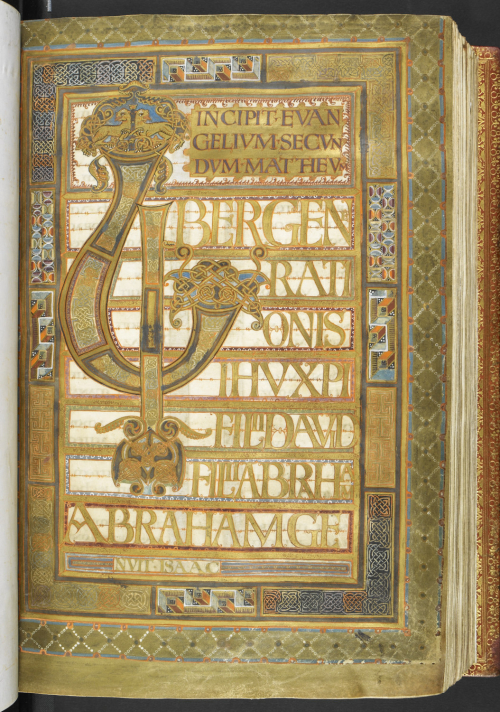 Some precious books were covered with gold on the outside as well as within. These jewelled 'treasure bindings' are recorded in inscriptions, but very few survive intact to this day. Thanks to a generous loan from the Morgan Library in New York, there is a rare example of an early medieval treasure-binding in the exhibition. This covers one of the gospel-books owned by a noblewoman called Judith. Judith was born in Flanders, and she married Tostig, the brother of King Harold II (who was killed at Hastings). Her book  is covered in silver-gilt and jewels, with cast, 3-D figures depicting Christ in glory and the Crucifixion. 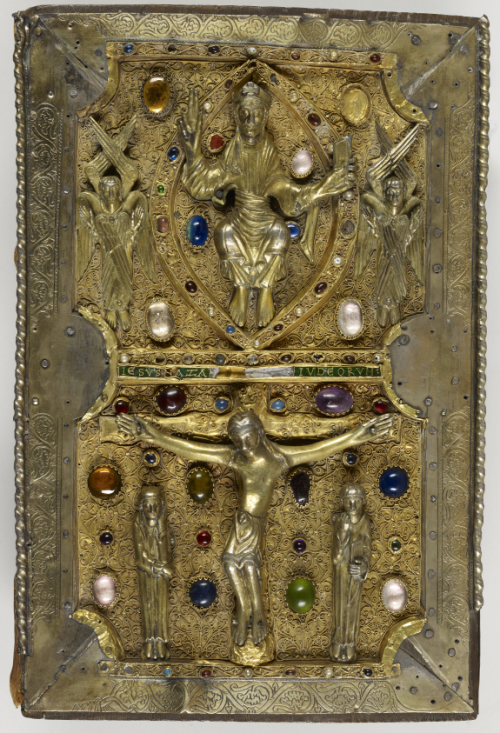 In addition to books, the exhibition contains golden objects, including the largest hoard of Anglo-Saxon gold ever found: the Staffordshire Hoard. This was found in 2009 and it seems to have been deposited before 675. Most of the pieces are associated with military equipment, including pommels from at least 74 swords. Some of these were made from gold and some were encrusted with garnets, like the cross pendant that was also found in the hoard.  The exhibition also includes golden sword hilts and two snake-or eel-like decorations, also crafted from gold. 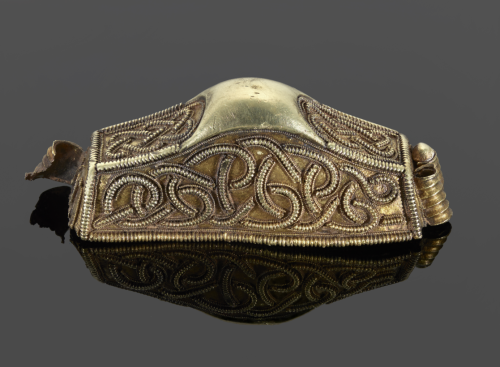 The exhibition also features gold and jewellery found at other sites. The Alfred Jewel, found near Alfred's fortress at Athelney, has a golden beast's head and the inscription 'Alfred had me made' in wrought gold around the side. 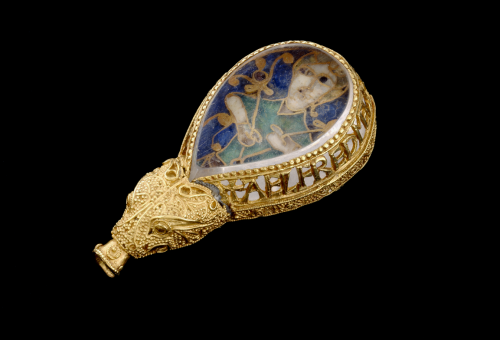 Perhaps the most amazing example of goldsmithing from the Anglo-Saxon kingdoms is the belt buckle found at the Sutton Hoo ship burial of a 7th-century warrior. The buckle doubles as a hinged box with a triple-lock mechanism. It is decorated with 13 biting beasts that twist around each other. Each creature is stamped with a different pattern to give it a different texture. How practical it would have been to wear is another matter: it weighs just under half a kilogram! 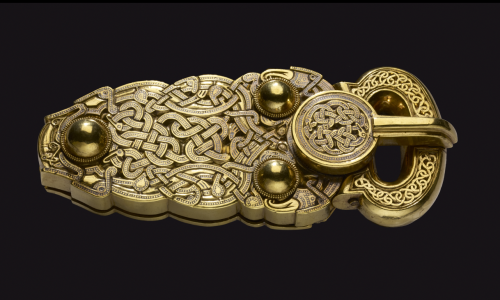 Sutton Hoo Belt Buckle; © The Trustees of the British Museum. All rights reserved.

The Anglo-Saxon Kingdoms exhibition is a literal treasure-trove of amazing art, as well as unique historical documents and literary masterpieces. It's on until 19 February 2019: book your tickets now!

Posted by Ancient, Medieval, and Early Modern Manuscripts at 8:18 AM

Can you explain why the Harley Golden Gospels is in the exhibition? I can find no record if it having any link with Anglo-Saxon England.

Thank you for your comment. The exhibition examines the history, art and culture of the Anglo-Saxon kingdoms, and the artistic, political and economic connections that Anglo-Saxon England had with the wider world. We have displayed the Harley Golden Gospels in the context of the impact of Charlemagne’s empire on the Anglo-Saxon kingdoms, and the impact in turn of certain Anglo-Saxons (notably Alcuin of York) on artistic and literary production associated with Charlemagne’s court.

Thank you for such a great thought provoking exhibition. Is there any information on where the gold used in England was mined , for example as in the Winfarthing ‘brooch’ ?