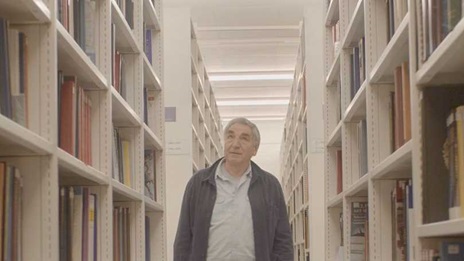 Jim Carter of Downton Abbey fame at the British Library During his visit to the British Library, Jim was able to view one of the earliest surviving copies of Bede’s Ecclesiastical History. This manuscript was copied in the first half of the 9th century in a southern English scriptorium, most likely Canterbury. The manuscript features a distinct style of insular interlace decoration, cleverly interwoven with the heads of small beasts, which is used to write the first letter of each of the five books in Bede’s narrative. This wonderfully decorated letter ‘B’ begins the opening passage of the whole text, Brittania Oceani insula ('Britain, an island of the Ocean'). 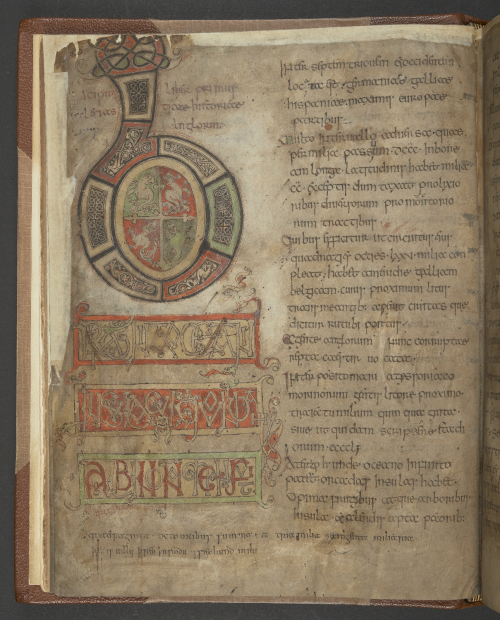 The first book of the Ecclesiastical History begins with the arrival of Julius Caesar, and charts the successes and failures of the Roman campaigns in Britain. Bede vividly described the advancement of Caesar’s cavalry as they marched north. Upon reaching the River Thames, they encountered the sharp, wooden defensive stakes which the native Britons had laid into the riverbank. According to Bede, traces of these stakes were still visible in his own day, and he compared them to the thickness of a man’s thigh.

Bede also described the construction of Hadrian’s Wall. Bede stated that the Wall was 8 feet wide and 12 feet high, and marvelled that it, too, was still standing in his own day. Bede’s knowledge may have been drawn from first-hand observation, since he was writing from his monastery at Wearmouth-Jarrow, located a few miles from the Wall itself. The two Roman walls in the north of Britain would later be depicted in the map of Britain produced by Matthew Paris in the 13th century. When speaking of his visit to the British Library, Jim was amazed by what he had learned from the venerable Bede. This lavishly decorated copy of Bede’s Ecclesiastical History will be on display in the Library's forthcoming Anglo-Saxon Kingdoms exhibition. Visitors may be able to discover, just as Jim did, what Bede and this splendid manuscript can reveal about the early history of Britain. The Anglo-Saxon Kingdoms exhibition runs from 19 October 2018 to 19 February 2019.

I hope this turns up on YouTube - typically overseas followers can't access UK productions--would LOVE to see it!