Two of the British Library's most famous illuminated manuscripts — The Romance of the Rose (Harley MS 4425) and Christine de Pizan's 'The Book of the Queen' (Harley MS 4431) — will be on display at the exhibition The Renaissance Nude, at the Getty Center, Los Angeles (30 October 2018 to 27 January 2019). The exhibition will then move to the Royal Academy, London (3 March to 2 June 2019). We hope that many of our readers will be able to see these manuscripts in person, in the USA or in the UK.

Far more than a person with no clothes on, the nude is a tradition of European art originating in Classical Antiquity. Nude artworks follow a visual formula where the naked body is displayed for the aesthetic or often sexual admiration of an imagined viewer. In recent decades, the tradition has been heavily criticised, especially by feminist thinkers and activists.

But what do medieval manuscripts have to tell us about the tradition of the nude? The Middle Ages are sometimes portrayed as a period when Classical art was forgotten, when prudishness dominated, and when sexism went unchecked. A look at these nudes from medieval art proves that none of these were true. 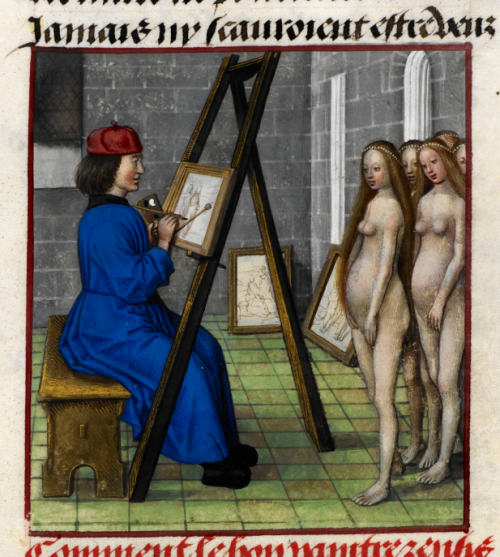 Some of the most influential stories for the tradition of the nude are retold in the 13th-century best-seller, The Romance of the Rose, an allegorical poem about the protagonist’s quest to win the love of the ‘Rose’. The story includes digressions into Classical mythology, such as the story of the ancient Greek artist Zeuxis, depicted here in a manuscript made in Paris in the 1490s.

The story goes that Zeuxis was commissioned to paint a nude picture of Helen of Troy, the legendary most beautiful woman in the world. Zeuxis could find no one beautiful enough to match his vision of Helen, so he selected five women to be his models and combined what he considered to be the best features of each. The story was important for the history of art because of its message that art is about more than simply imitating nature — artists had to use their skill and judgement to discover ideal beauty.

In The Romance of the Rose, the story has a very different interpretation. Here the tale illustrates the narrator’s point that no one can truly represent the beauty of nature — ‘even Zeuxis could not achieve such a form with his beautiful painting’. Rather, perfect beauty can only be created by God. This uniquely medieval twist transforms Zeuxis’ project to represent the ideal nude into a demonstration of the inadequacy of human artistry compared with the perfection of divine creation.

In line with this interpretation, the picture shows Zeuxis diligently painting at an easel with the five nude models grouped before him. Unfinished paintings are scattered around the room, suggesting unsuccessful attempts discarded by the frustrated artist. 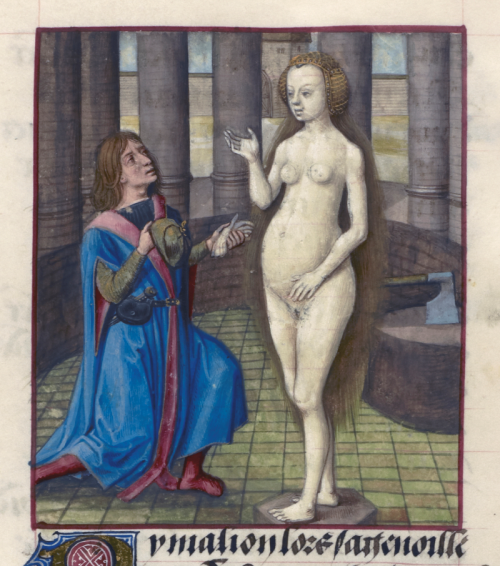 The Romance of the Rose later digresses onto the story of another ancient Greek artist and proponent of the nude, Pygmalion. According to the tale, Pygmalion sculpted a nude woman out of ivory with such skill that the statue seemed to be alive — ‘neither Helen nor Lavinia, however well-formed, were of such perfect complexion or development, nor did they have a tenth the beauty’. The sculpture was so beautiful and lifelike that Pygmalion fell madly in love with it. He became obsessed with buying it gifts, dressing it in costly clothes, and embracing and kissing it. Frustrated by his inanimate love, Pygmalion appealed to Venus to help him. The goddess placed a soul in the sculpture, transforming it into a living woman who offered Pygmalion her companionship and love. 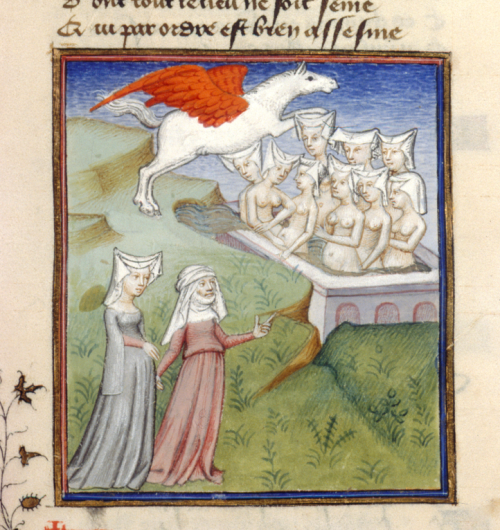 Christine and the Sybil encounter the Muses, The Path of Long Study: Harley MS 4431, f. 183r

If you are thinking that these stories are uncomfortable for their indifferent and objectifying representations of women, you are not the first — medieval women were already leading the critique. In the opening years of the 15th century, The Romance of the Rose sparked an intellectual debate known as the ‘Quarrel of the Rose’. A key critic was Christine de Pizan, the first professional woman writer in Europe (b. 1364, d. c. 1430). Christine accused the Rose of misogyny, caustically writing of the plot, ‘how much effort and trickery there is in order to accomplish nothing more than the deception of a maid through fraud and cunning’.

In her own books, Christine made a point of portraying women as intelligent, good and empowered. You can see the difference in her representation of nudes in her first-person dream allegory, The Path of Long Study — depicted here in a manuscript written and illuminated under Christine’s supervision in Paris, c. 1410–14.

In her dream, Christine follows the Cumaean Sybil on a cosmological journey beginning at the Fountain of Wisdom. According to Christine, ‘I saw nine ladies bathing nude in the fountain; they truly seemed to have great authority, worth, and wisdom’. The Sybil explains that these are the nine muses, ‘they control the fountain which is so beautiful, clear, and healthy. And they hold their holy school there, which is enclosed by great learning’. In Classical mythology, the muses were the goddesses that inspired learning and the arts. Here, their nudity emphasises their intimate immersion in the waters of wisdom and their likeness to the fountain, ‘beautiful, clear, and healthy’. In this way, Christine uses the nude to represent the ideals of wisdom and to emphasise women’s embodiment of intellectual values.

And like anyone with great authority, worth and wisdom, the muses wouldn’t think of bathing without their wimples. 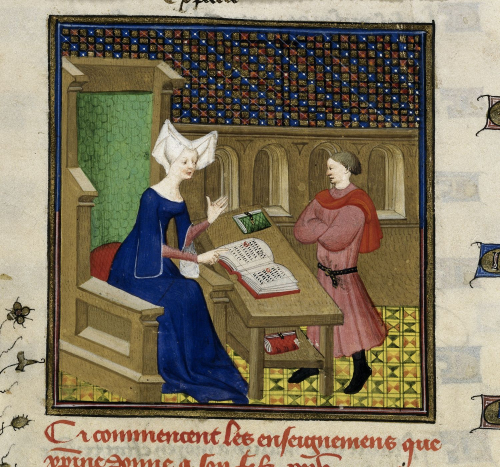 You can see both these stunning manuscripts in the Renaissance Nude exhibition at the Getty Center then the Royal Academy. You can also view our manuscripts on the British Library's Digitised Manuscripts site.

Why do they all look like they are in early pregnancy?

This figure type was the ideal for the period. The most famous example, also from the 15th century, is Jan Van Eyck’s Arnolfini Portrait in the National Gallery https://www.nationalgallery.org.uk/paintings/jan-van-eyck-the-arnolfini-portrait. It reflects fashions in women’s dress in the period, which also emphasised a pear-shaped figure with lots of gathered fabric around the waist.

It would be intersting to find out WHY the tummy was erogenous while breasts were crushed flat in clothes or reduced to mere buttons if exposed.. I'll bet big tummy/flat chest was artistically prudishly perfect but the volumptuous form most prized in real life!! PS poor diet might have been reason for those large tummies.

Amazing! I'm here at de #PolonskyPre1200 conference in Paris and they just talked about the blog. I'm already in my third post and loving it.