A few years ago, an American historian was contacted by the creators of a quiz show who were doing some fact-checking for their Halloween episode. Were pumpkins used in pagan rituals in the British Isles, they asked, and did early medieval paganism inspire pumpkins' role in modern-day Halloween celebrations? The historian had to break it to them pumpkins are native to North America and were not introduced to Europe for another thousand years, so that Anglo-Saxons could not have invented pumpkin carving. 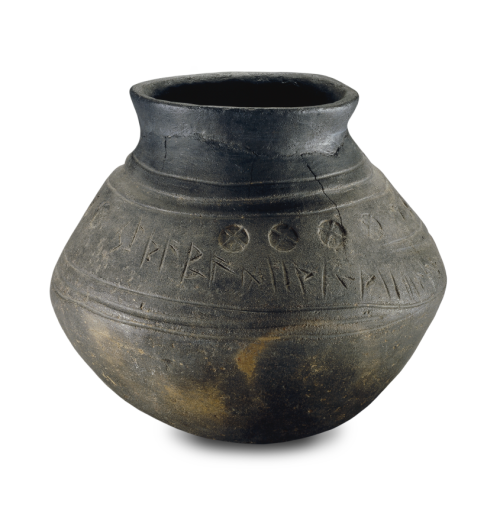 The Loveden Hill Urn, a 6th-century pagan funerary urn with a runic inscription found in a cremation cemetery in Lincolnshire, on loan to the Anglo-Saxon Kingdoms exhibition from the British Museum. © The Trustees of the British Museum. All rights reserved.

The earliest English speakers — the Germanic-speaking migrants who settled in southern and eastern Britain between the 4th and 6th centuries — were pagans. Very little written evidence survives from the Anglo-Saxon kingdoms in that period, apart from runic inscriptions that are only a few words long. You can see some examples in our Anglo-Saxon Kingdoms exhibition (open until 19 February 2019).

Evidence of pagan practices has to be pieced together from place names (such as Wednesbury, Woden's burg and Tyesmere, Tiw's lake) and burials. For example, tombs that contain objects such as weapons, pots, combs, jewellery and other ‘grave goods’ are often believed to be associated with pagans. The most famous burial of this kind was excavated at Sutton Hoo in the 1930s, although it also included items associated with Christianity. There, archaeologists discovered the tomb of a rich warrior buried in a 27-metre-long ship along with weapons, a helmet, jewellery, objects used in feasts, and silver from Byzantium. Cremation cemeteries are also associated with pagans, since Christians did not tend to be cremated at this time. 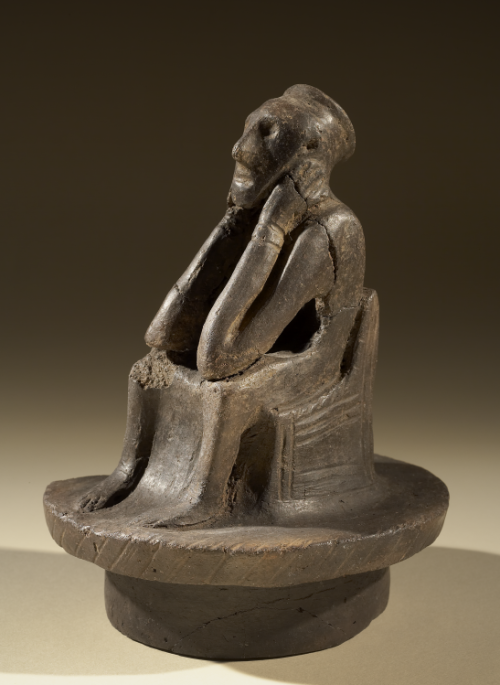 Archaeological evidence suggests that there was no one, monolithic ‘Anglo-Saxon paganism’: practices could vary widely across regions, time periods, and even within individual communities. 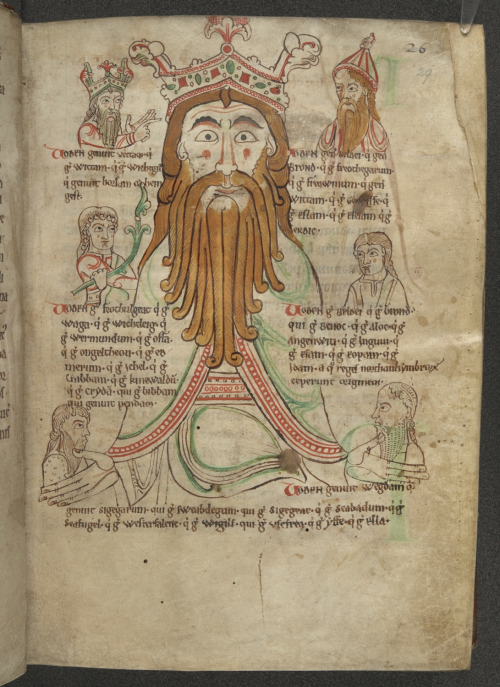 Image of Woden and five early kings allegedly descended from him, from a 12th-century historical text: Cotton MS Caligula A VIII, f. 29r

Indirect evidence about early Anglo-Saxons’ beliefs may also be derived from the impact of pagan traditions on sources made after they converted to Christianity. Some pagan gods, such as Woden, continued to appear in the genealogies of Anglo-Saxon kings, sometimes alongside figures like Adam and Eve.

The names of certain modern English days of the week may also preserve the names of gods worshipped by pagan Anglo-Saxons, as well as a Roman god (Saturn), the Sun and the Moon.

Belief in pagan gods gave way to belief in a single, Christian god in the Anglo-Saxon kingdoms. Nevertheless, later Anglo-Saxons may have retained beliefs from pagan lore. For example, elves appear in the writings of Anglo-Saxons long after the conversion to Christianity. Indeed, the earliest written reference to an elf appears in a 9th-century, Christian prayerbook, in a prayer that compared Satan to an elf.

Later writers were not always reliable when describing the pagan past. These writers were churchmen and churchwomen who had never met a pagan and whose primary knowledge of paganism came from sources that described Roman religions. This is true even in the case of someone like Bede, who lived only a few decades after the last major Anglo-Saxon kings converted to Christianity. In his Ecclesiastical History, Bede appears to offer a detailed account of a pagan priest called Coifi, right down to very specific rules about pagan priestly attire: ‘it was not lawful before for the high priest either to carry arms, or to ride on any animal but a mare’ (read the translation here). Bede claimed that, in his day, you could still visit the place where Coifi’s temple had stood before Coifi converted to Christianity. However, scholars have pointed out that Bede seemingly copied his descriptions from the Roman and ancient Near Eastern religions he had read about, rather than from any knowledge of 7th-century religious practices. Similarly, there are doubts about Bede's claims that 'Easter' was the name of a pagan goddess.

Later writers, including Ælfric, abbot of Eynsham, explicitly set out to prove that the Roman, 'Danish' and Germanic gods were the same. Ælfric claimed that the days of the week were essentially named after the same pagan gods in Latin and Old English. He argued that gods with similar characteristics gave their names to the same days in the Latin and English weeks, like the fertility goddesses Venus and Frigg. However, Ælfric deliberately conflated these different religions in order to condemn them all. 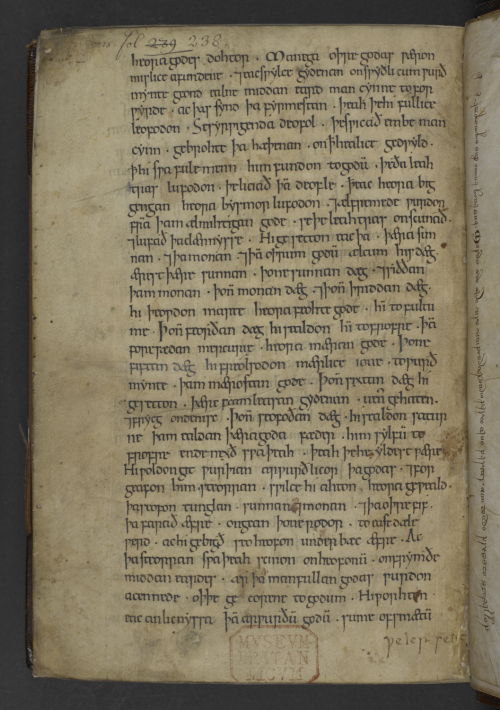 Ælfric explains the names of the days of the week in Latin and English in his 'Sermon on False Gods': Cotton MS Julius E VII, f. 240v

Ælfric mentioned 'Danish' as well as Roman gods because many Viking raiders were pagan, especially in the 9th century. Some who came to and settled in England were pagan. Small amulets in the shape of Thor's hammer have been found in parts of England. That said, the surviving texts from this period were all written by Christians, who did not offer any details about these pagans' practices; Alfred the Great's biographer, Asser, used 'paganus' as a derogatory term for all Scandinavians, even a Christian Scandinavian who had become a monk.

Nevertheless, knowledge of Scandinavian paganism existed in some circles. Shortly after 1073, at Christ Church Cathedral, Canterbury, a manuscript was made which included information about timekeeping, prognostics and some medical texts. At the bottom of one of its tables, someone added a medical charm which invoked the pagan god Thor. The charm is written in Old Norse runes, translated as:

‘Gyril, wound-stirrer, go now! You are found! May Thor ‘hallow’ you, lord of ogres, (G)yril wound-stirrer. Against rushing (infection?) in the veins.’ (read the translation here).

There remains a mystery about who added the runes, and why someone who knew pagan charms and Old Norse runes was present at Canterbury in the late 11th or early 12th century.

So what do we know about paganism in the Anglo-Saxon kingdoms? We know the names of certain gods; we can see different burial practices; and we know that traces of Anglo-Saxon paganism remain in modern English culture. But we can be sure of one thing: they did not have pumpkins.

It is worth remembering that 'pagans' to Bede and others would include Hellenic Christians who rejected Rome's orthodoxy and supremacy for the pope. There were Christians in Gaul and Britannia from the 1st century, possibly even before Rome. Queen Elizabeth I used the primacy of Christianity in Britain as a further argument against Roman papal supremacy.

The association between an orange lantern and the cross quarter day comes from the British Isles is not pagan but seems to date from Protestsnt-Catholic conflicts in the 18th century, Using pumpkins seems to be an American invention. https://lifeasahuman.com/2011/arts-culture/culture/why-jack-o-lanterns-are-politically-incorrect/

They really ought to state that the pumpkin carving tradition was carried over from turnips, which were very much present here in those days.