This weekend marks two important anniversaries. 13 October is the feast-day of King Edward the Confessor, who ruled England from 1042 until his death in January 1066. His successor, King Harold II, was killed 952 years ago at the Battle of Hastings, on 14 October 1066. In the week that our major exhibition, Anglo-Saxon Kingdoms, opens at the British Library, here is some of the manuscript evidence for these last kings of Anglo-Saxon England.

Hastings is often cited as ‘the end of Anglo-Saxon England’. But how ‘English’ were these last Anglo-Saxon kings? Harold had a Norse name, and his parents were closely linked to King Cnut, who ruled England and Scandinavia; while Edward the Confessor spent most of his formative years in exile in Normandy. 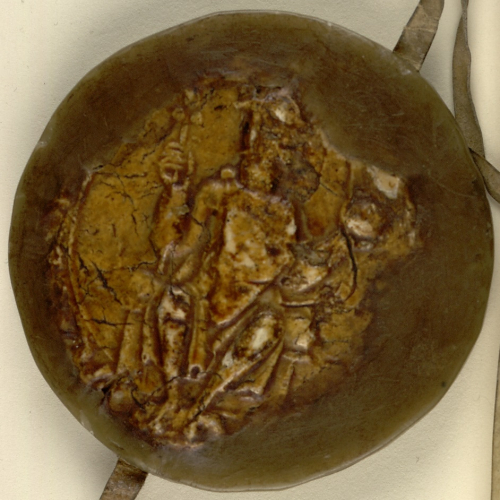 Although Edward the Confessor died in January 1066, his saint’s day was eventually set for 13 October: the last day England was ruled by an ‘English’ king, as opposed to a Norman. (A handy tip: you can enter Westminster Abbey for free on this day, since Edward’s shrine is there.) But Edward had many close connections to Normandy. His parents were Æthelred the Unready and Emma of Normandy, the daughter of Richard I, duke of Normandy. During Edward’s childhood, England was repeatedly attacked by Scandinavian forces.When he was about 10, he fled to Normandy wih his mother, his brother Alfred and his sister Godgifu. After Æthelred died, Emma returned to England to marry the conquering King Cnut, but Edward and his siblings remained in Normandy, probably living with their relatives.

When King Cnut died in 1035, Alfred and Edward, now in his 30s, invaded England in order to claim the throne. They were probably supported by Norman forces and possibly encouraged by Emma. After being defeated, Edward escaped but Alfred was captured, blinded and killed by Cnut’s son, Harald Harefoot. Edward seems never to have forgiven his mother for marrying Cnut or for her role in their failed coup.

Harald Harefoot died in 1040 and Emma’s son by Cnut, Harthacnut, succeeded to the throne. Harthacnut and Emma had trouble retaining power, so Emma invited Edward to return from Normandy and rule as king alongside Harthacnut. Harthacnut choked at a wedding feast and died, and Edward was crowned as sole king of England in 1043, when he was around 40 years old. Up to that point, he had spent three-quarters of his life outside England. 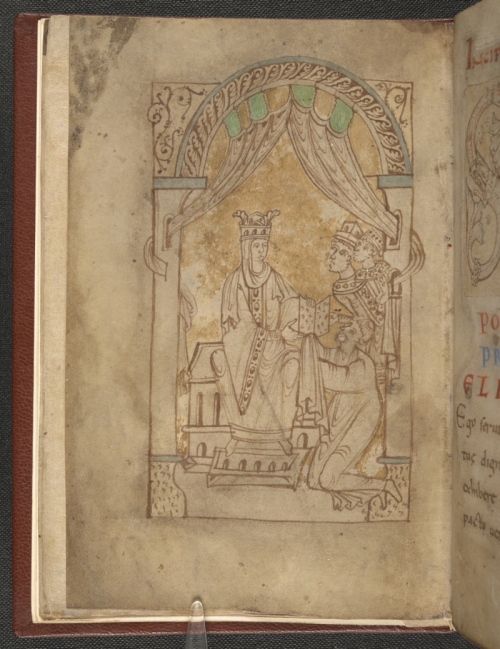 Portrait of Emma being presented with the Encomium Emmae Reginae, while Harthacnut and Edward look on, c. 1041: Add MS 33241, f. 1v

One of Edward’s first actions within a few months of becoming king was to deprive Emma of her property. He still had many Continental connections. His inner circle included his relative Ralph of Mantes, who stationed troops in England. Edward also promoted the interests of the Norman abbot Robert of Jumièges, who was eventually made archbishop of Canterbury. He also promoted Leofric, a Cornishman educated in Liège, to be his bishop of St Germans and Crediton (Exeter). In 1051, Edward even hosted a visit from his cousin, William, duke of Normandy. 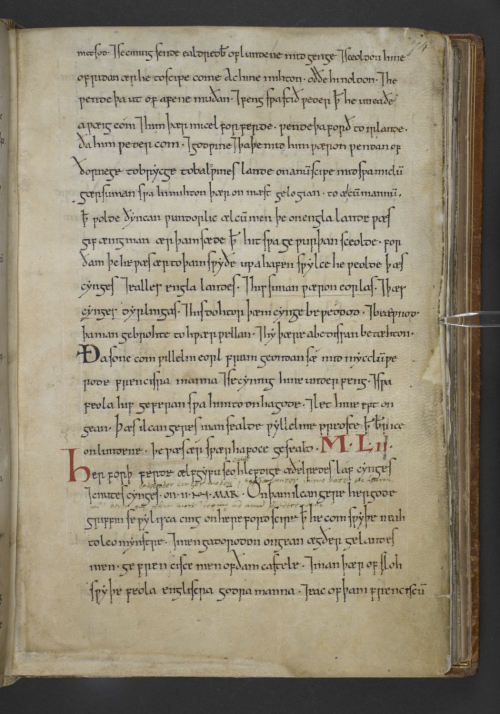 The only record of William the Conqueror visiting England before the Conquest, from Anglo-Saxon Chronicle D: Cotton MS Tiberius B IV, f. 74r

Another close advisor to Edward was his father-in-law, Earl Godwine. Godwine was an English noble, but he had risen through the ranks of Cnut’s regime and had married a Scandinavian woman. A sign of these connections is the Norse names he gave some of his sons: Swein (Sven), Tostig and Harold. While Harold may not have grown up outside England, he still travelled widely and his family relied on the support of Continental powers.

In 1051, after Earl Godwine had a dispute with Eustace of Boulogne and Edward's other Continental advisors, his family fled to Bruges. His sons travelled to Flanders and Scandinavia to raise a fleet to force Edward to allow them to return, and Harold travelled to Ireland, also seeking support. The family succeeded in being reinstated. Harold also travelled much further afield, to Flanders, the German lands and Rome, where he collected relics.

Further evidence of connections on both sides of the English Channel, even before the Norman Conquest, is that Harold had probably stayed at the court of William of Normandy. In 1064, two years before they faced off across the battlefield at Hastings, William and Harold may have even fought together during William’s campaigns in Brittany. Later Norman sources made much of this meeting, claiming that Harold swore on relics to allow William to succeed Edward as king of England. These claims seem slightly too convenient in light of the later Norman Conquest. However, The Life of King Edward commissioned by Harold’s sister mentioned that ‘Harold had a tendency to be too generous with his promises. Alas!’ 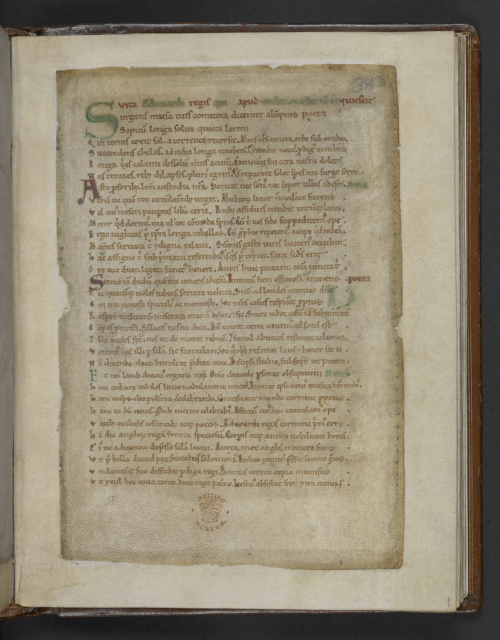 Whatever happened between Harold and William, when Edward died in 1066, Harold was swiftly elected king by the English nobility, who claimed that Edward has nominated Harold on his deathbed. Harold’s 10-month reign was dominated by warfare, first with the Welsh kings and then with challengers for his own throne. England was attacked from the sea by the Scandinavian leader Harald Hardrada, who was supported by Harold Godwinson’s own brother, Tostig. Harold defeated Harald Hardrada and Tostig was killed at the Battle of Stamford Bridge on 25 September 1066. The English king then immediately marched South, since William of Normandy had landed on the coast and was devastating the surrounding countryside. 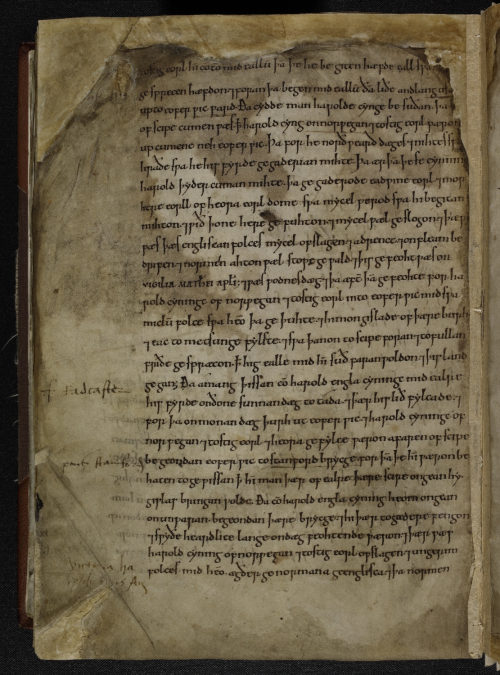 On 13 October 1066, as Harold marched to confront William's invading forces, few could have predicted the sweeping changes that would occur when William won the Battle of Hastings. English government, the aristocracy, architecture and the English language would undergo radical change in the following decades. But some things did not change. English rulers, nobles and tradespeople had close links to the Continent before the Norman Conquest, and there was already cultural and artistic exchange between the Anglo-Saxon kingdoms and the wider world.

You can discover more about these connections in the British Library's Anglo-Saxon Kingdoms exhibition (19 October 2018–19 February 2019).

Normally these blogs are excellent. This one, less so. Its got a few dubious comments and one outright mistake, as when it says Harold II started his reign in 1066 fighting the Welsh. That campaign was done and dusted back in 1063.
And that page of the Anglo-Saxon Chronicle recording William’s visit to England in 1051 when Edward supposedly promised him the crown ... the record is near the bottom of the page and its the gloss that’s been inserted above the original text in a later hand. Doctored evidence perhaps?

Edward the Confessor’s feast day is 13 October because that’s the day his relics were translated in 1163. It isn’t the day that England last had an English king, as the BL blog suggests.

___
Thank you for reading the blog and for your comments. Harold had certainly fought Welsh forces earlier in his career, including his campaign in 1063 that you mentioned. However, Harold once again prepared campaigns against Welsh forces in 1066, not least because he possessed lands west of Offa's Dyke which were still being harried by Welsh forces. Please see Robin Fleming's work on Harold's reign. The reference to William's visit is not a gloss but is part of the main text. It begins with the large initial Đ ('Ða sone com Willelm eorl'), about half-way down the page. If you'd like to see this manuscript in person, please do come to the Anglo-Saxon Kingdoms exhibition!

On your second point, it is certainly correct that Edward was translated on 13 October. But it is no coincidence that 13 October-- the day before the anniversary of Hastings-- was chosen. Please see Nicholas Vincent's article on 'The Use and Abuse of Anglo-Saxon Charters by the Kings of England', in Martin Brett and David A. Woodman (eds), The Long Twelfth-Century View of the Anglo-Saxon Past (London: Routledge, 2016).