Who was the greatest?

Alfred, king of the West Saxons and Anglo-Saxons, is the only English monarch to be traditionally known as the ‘Great’. He was renowned for defeating the Vikings and for overseeing one of the first great periods of English literature, but he did not govern all of the region that we now know as England. Instead, his grandson, Æthelstan, was the first king to control the area that covers what we know as England. Æthelstan was more militarily successful than Alfred, and he had equally glowing cultural credentials. Both kings feature prominently in the British Library’s Anglo-Saxon Kingdoms exhibition (on until 19 February, 2019), which leads us to ask: who was greater, ‘the Great’ or the grandson? 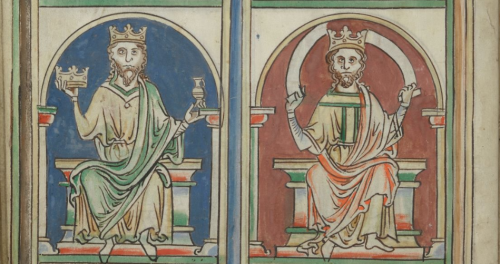 The case for Alfred hinges on his resilience and also the intellectual activity at his court. He was, perhaps, an unexpected king, being the youngest of the six children of King Æthelwulf of Wessex. The start of Alfred’s reign was not auspicious. He became king during a period of fierce fighting with Viking forces and was forced to retreat into a swamp (contrary to popular myth, he probably didn’t burn any cakes in the process). Nevertheless, Alfred persevered and he eventually established a peace treaty with the viking leader Guthrum, who became his godson. A copy of this treaty is on display in the exhibition.)

Alfred’s endurance was personal as well as military. According to members of his court, Alfred had mysterious illnesses which became acute during communal events, including his own wedding. Alfred corresponded with distant figures including the patriarch of Jerusalem, seeking medical remedies that would ease his suffering. 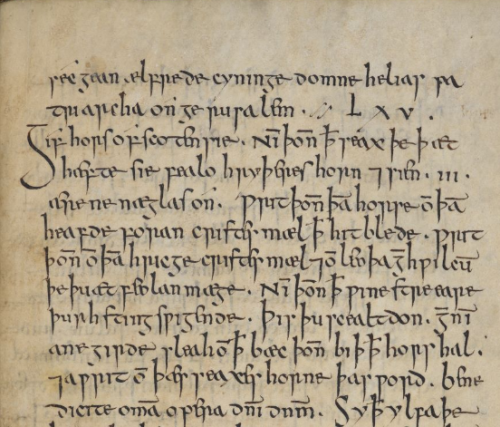 'All this Lord Elias, the patriarch of Jerusalem, ordered to be said to King Alfred', from Bald’s Leechbook: Royal MS 12 D XVII, f. 106r

Alfred owes much of his later reputation to the literary output of his court in the later decades of his reign. His reign saw a flourishing of Old English literature, from the compiling of the earliest manuscripts of the Anglo-Saxon Chronicle to the translation and adaptation of classical Latin texts into Old English. Some of these translations were even credited to Alfred personally, although the extent of his involvement is debated. Alfred encouraged other people to learn, by sending some of these Old English translations round his kingdom. In the exhibition you can see the copy of the Old English adaptation of the Pastoral Care — Pope Gregory the Great’s tract on leadership — that Alfred sent to the bishop of Worcester. 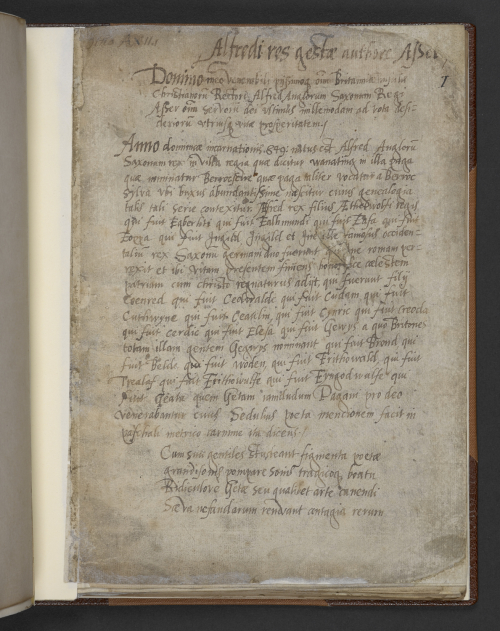 Crucially for Alfred’s later reputation, a biography about him survives. The Vita Alfredi (Life of Alfred) was written by Asser, a Welsh clergyman at Alfred’s court who became bishop of Sherborne. No other biography survives for an Anglo-Saxon king. Asser presented Alfred as perfect in every way. Asser’s Alfred was an heroic warrior, a learned man who invented everything from new types of ships to a candle clock, and a generous friend. His children were amiable and intelligent. Even Alfred’s illness was presented as a gift from God. Asser provided an unusually intimate portrait of the king, although his account was designed to promote Alfred's wider interests. 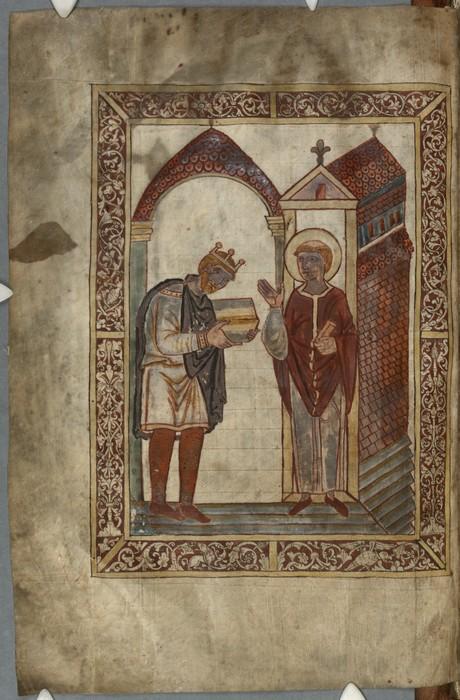 But was Alfred really the greatest king? What about his grandson Æthelstan, the first king of England? Æthelstan was the first southern king to exercise real control over the East Midlands, East Anglia and the North. He claimed control of Northumbria in 927, after the death of his brother-in-law Sihtric, the Scandinavian ruler of York. Æthelstan gained important northern allies, such as the powerful community of St Cuthbert. It was around this time that coins and charters gave him the title ‘king of the English’ (‘rex Anglorum’). But Æthelstan’s ambitions did not end there: his documents show him styling himself ‘king of all Britain’ and ‘emperor’.  In 937, Æthelstan and his brother Edmund defeated a combined force of the kings of Dublin, Scots, Strathclyde and others at a place called Brunanburh.

Æthelstan’s victory was celebrated in a dramatic Old English poem copied into the Anglo-Saxon Chronicle:

‘King Æthelstan, lord of nobles, dispenser of treasure to men, and his brother also, Edmund atheling, won by the sword’s edge undying glory in battle ’round Brunanburh. [They] clove the shield-wall, hewed the linden-wood shields with hammered swords … the people of the Scots and the pirates fell doomed. The field grew dark with the blood of men … Never yet in this island before this, by what books tell us and our ancient sages, was a greater was a greater slaughter of a host made by the edge of the sword, since the Angles and Saxons came hither form the east, invading Britain over the broad seas, and the proud assailants, warriors eager for glory, overcame the Britons and won a country.’ (translated by D. Whitelock and others, The Anglo-Saxon Chronicle: A Revised Translation, London, 1961), pp. 69–70.) 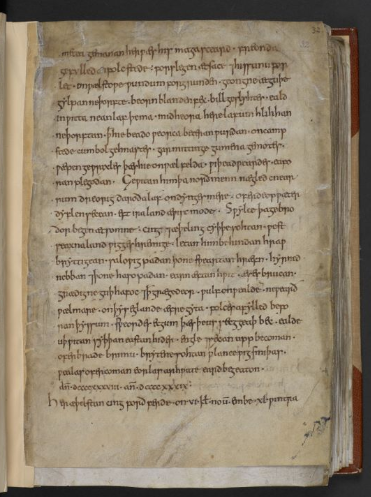 Æthelstan was also involved in European politics. At least four of his half-sisters married into noble continental families, while the rulers of Brittany, Norway and Francia sent their sons to be fostered at Æthelstan’s court. Æthelstan also helped his nephew Louis try to claim to the throne of West Francia, and even sent ships to help him attack the Flemish coast.

As was the case with Alfred, Æthelstan’s court was an intellectual hub that attracted scholars from Ireland, Italy, the Frankish realms and beyond. Æthelstan himself was a noted bibliophile: four of the books he owned are on display in the Anglo-Saxon Kingdoms exhibition. Even the charters produced during Æthelstan’s reign can be read as learned works of literature as much as legal documents. 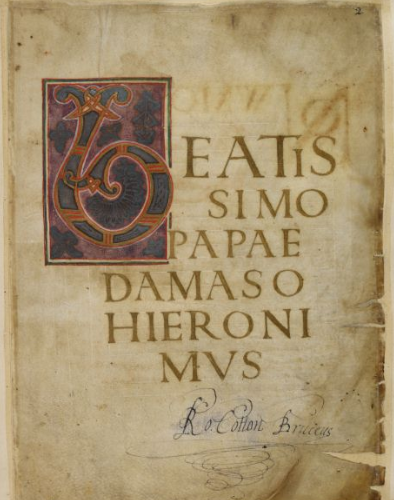 Opening lines of St Mark’s Gospel, from a gospel-book apparently given by the future emperor Otto I to King Æthelstan: Cotton MS Tiberius A II, f. 75r

Æthelstan was also generous. We have proof of this in the form of inscriptions that note the books and treasure he gave to churches, some of which still survive.

In addition to being a successful warrior, a bookworm and the first king of England, Æthelstan has the distinction of being the first Anglo-Saxon king for whom a contemporary, painted portrait exists. A manuscript on loan from Corpus Christi College Cambridge depicts Æthelstan presenting a book to St Cuthbert. The book itself seems to have been intended as a gift from Æthelstan to St Cuthbert’s community, to ensure their continued support of the first king of England.

So who was the greatest, Alfred or Æthelstan? Come to the Anglo-Saxon Kingdoms exhibition (on at the British Library until 19 February 2019) and decide for yourself.

Great preview of the exhibition! I had understood that Alfred wasn't highly rated until Victorians began looking around for Saxons to glorify for the Germanic royal family. Then suddenly Alfred became 'the Great' and his rather mediocre career ceding half the kingdom to Danes and relying on foreign mercenaries for the rest became the stuff of Saxon myth. On that score, King Aethelstan was definitely the greater!