A spoonful of sugar

Today, the mention of sugar evokes reports about the harmful health effects of increased sugar consumption, and counter-actions such as the recently introduced UK ‘sugar tax’. But sugar is also a universally used inactive ingredient in many medications. As Mary Poppins was aware, it helps less pleasant ingredients go down. When sugar was first introduced to Europe, and for several centuries afterwards, it was regarded as an active — and curative — medical ingredient in its own right. 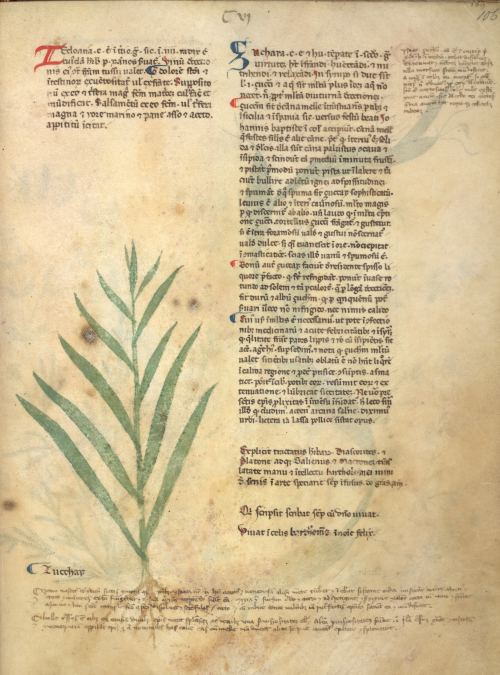 One of the earliest mentions of sugar in England is found in a manuscript containing a collection of medical recipes, written in the mid-to-late 11th century (Sloane MS 1621). Although made in what is now the Low Countries or northern France, this manuscript was brought soon afterwards to the abbey of Bury St Edmunds in England. Perhaps it came with Baldwin (d. c. 1097), originally from Chartres in France and physician to King Edward the Confessor (1042–1066), who was made abbot of Bury St Edmunds in 1065.

At Bury, numerous scribes added medical recipes to the book throughout the later decades of the century, suggesting it was valued and frequently consulted. Sugar is found in the ingredients lists of two of these added recipes, showing that Bury St Edmunds had access to the most current medical literature available in Latin. The close study of this manuscript, which led to the discovery of the recipes mentioning sugar, has been facilitated by its digitisation for The Polonsky Foundation England and France Project. 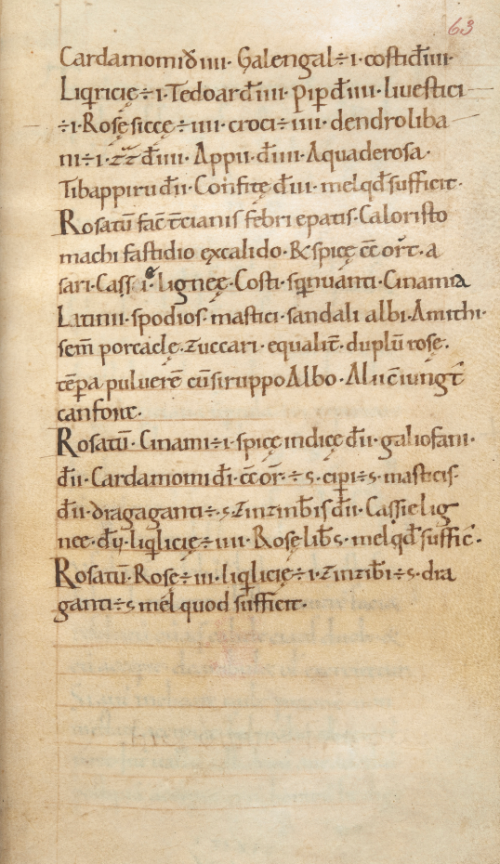 Sugar is one of several exotic ingredients from the Far East that were largely unknown to the authors of the Greco-Roman sources that formed the core of medieval medical texts. These ingredients were not brought to Europe until the rise of the Arab-Muslim empire from the 7th to the 12th centuries. The Persian Sasanid Empire was among the first territories to be conquered, along with knowledge of cultivating sugarcane. This is demonstrated by the history of the word sugar itself, which reached English via the Medieval Latin zuccarum/saccarum derived from Arabic sukkar, which in turn stems from Persian šakar.

Sugar seems to have been among the later Arabic medical ingredients to reach Europe, as it is hardly ever mentioned in pre-11th century sources. Other Far Eastern ingredients brought to Europe by Arab merchants were definitely known sooner. Some were so well-known to the writers of Anglo-Saxon medical texts that they were adapted into Old English. For instance, two recipes in the work known as Lacnunga (Healings) list sideware (zedoary, from Persian zadwār) and gallengar (galangal, from Arabic ḵalanjān). The Latin versions of the words are zedoaria and galinga/galangal respectively. For more on exotic ingredients in Anglo-Saxon medicine, have a look at the illustrated Old English Herbal. 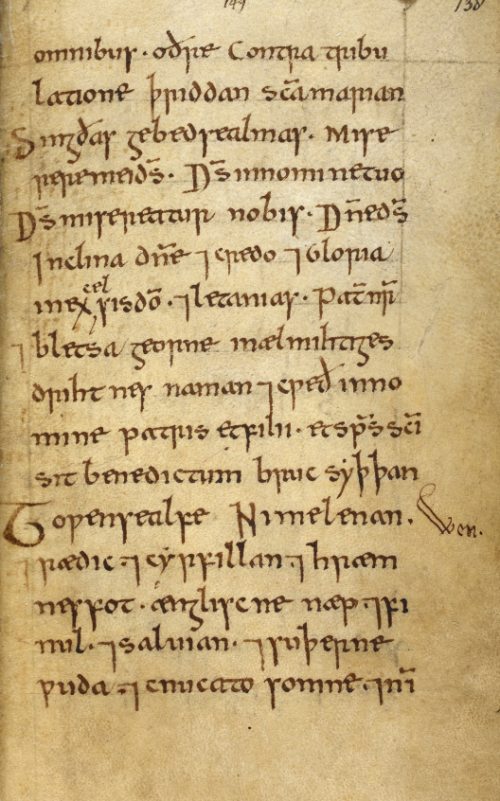 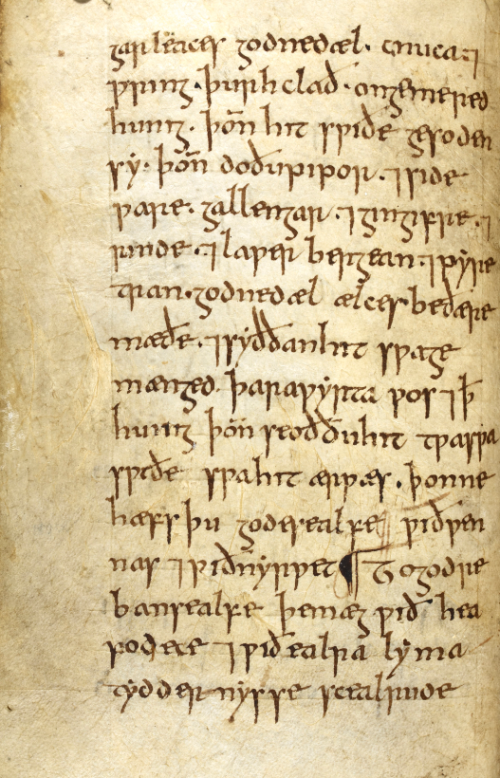 What is so significant about the addition of recipes mentioning sugar in Sloane MS 1621, at a monastery in England, is the specific time at which it occurred. The closing decades of the 11th century witnessed exciting new developments in the history of medicine in Europe. The earliest translations of Arabic medical texts into Latin were made in central and southern Italy in the last quarter of the 11th century. It was through Arabic textual sources, as opposed to trade, that knowledge of sugar seemingly reached Europe. A key figure in this process may have been Constantine the African (d. c. 1087). Originally from Carthage (in modern-day Tunisia), he had moved to Italy and entered the Benedictine abbey of Monte Cassino by 1077. 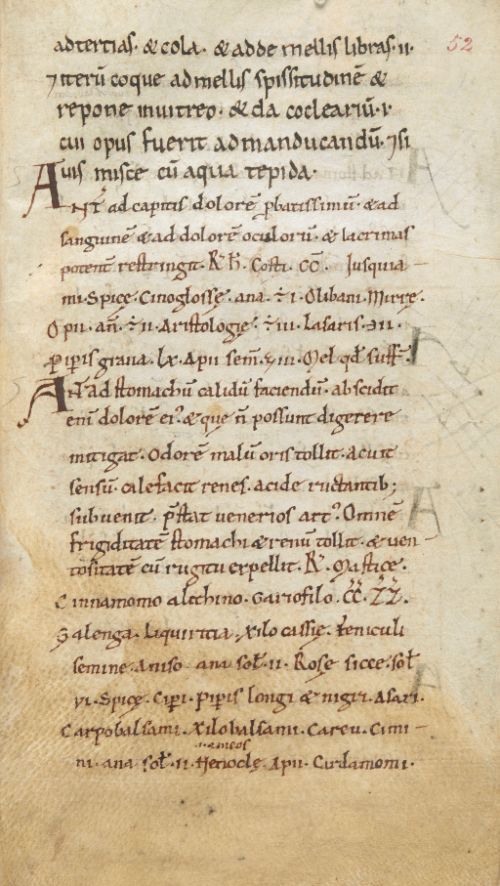 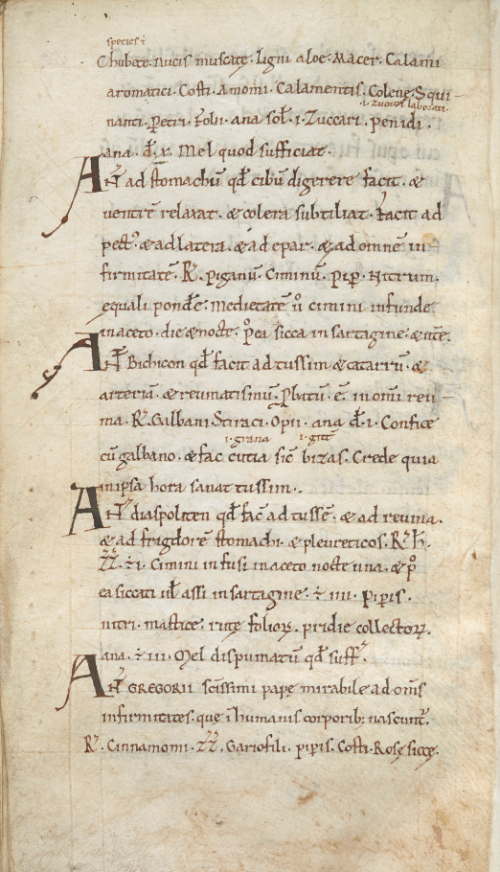 Antidotum ad stomachum calidum faciendum, beginning on line 12 of the recto, and with the list of ingredients on the verso including ten drams each of zuccari and penidi (rock candy): Sloane MS 1621, ff. 52r–52v.

Unfortunately, Constantine did not reference his Arabic sources, so it is hard to know exactly to which works he had access. Yet descriptions of sugar by Arabic writers, such as Ibn Māsawayh (d. 875) and Al-Rāzī (d. 925 or 935), closely parallel the way sugar is used in the recipes of Sloane MS 1621. In Arabic texts, sugar is described as having warming effects and being beneficial for the stomach and intestines. The recipe on ff. 52r–v opens with Antidotum ad stomachum calidum faciendum ('A remedy to make the stomach warm'). It also claims to be efficient against a painful stomach and for ‘anyone who cannot digest’.

Whether Abbot Baldwin and the monks of Bury St Edmunds had stomach troubles or merely a sweet tooth, it is clear that they had acquired the latest medical texts available in Europe, only decades after they had first been translated. Indeed, they might have gained knowledge of sugar before the saccharine substance itself had made it to England.

Thanks to funding from The Polonsky Foundation, and in conjunction with our partners at the Bibliothèque nationale de France, you can now see the whole of Sloane MS 1621 on our new viewer, using International Image Interoperability Framework (IIIF) technology. This enables you to compare manuscripts side-by-side, to annotate images or to share them on social media, and to download them either as an individual image or as a PDF of an entire manuscript. You may also like to read Taylor McCall's article, Medical knowledge in the early medieval period, which discusses this and other manuscripts.