This month many people are celebrating Movember, yet few imagine that one of the most detailed works on beards comes from the medieval period. The Church Fathers had thought about facial hair in moral and theological terms, while medieval theologians and clergymen debated whether communities of priests, monks and other clerics could grow beards at all. By the 12th century, canon law forbade Western clerics to grow beards, as beardlessness came to be associated with the purity and humility of angels. Laymen could grow beards if they wished, but that would mark them out even further from the clergy. 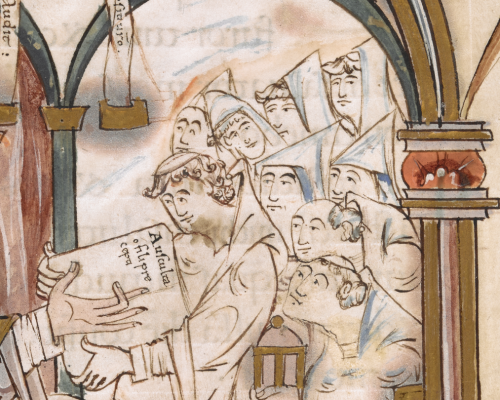 It is therefore surprising that a monastic author should have left us the only known apologetic treatise on beards. Burchard was abbot of the French Cistercian abbey of Bellevaux near Besançon, and in the 1160s he wrote to the community at Rosières, a neighbouring house of the same Order, to make amends for an offensive letter condemning the lay brothers for growing their beards. Cistercian lay brothers did not take the monastic habit, but they helped the monks run the abbey. They lived in separate quarters and led different lifestyles, which extended in turn to their facial hair.

Entitled ‘In defence of beards’ (Apologia de barbis), Burchard’s letter is actually a treatise in three chapters encouraging the lay brothers not to cut their beards. The author remarkably referred to his subject as barbilogia (‘barbilogy’) and to himself as barbilogus (‘barbilogist’). He could not have been more hip and modern. 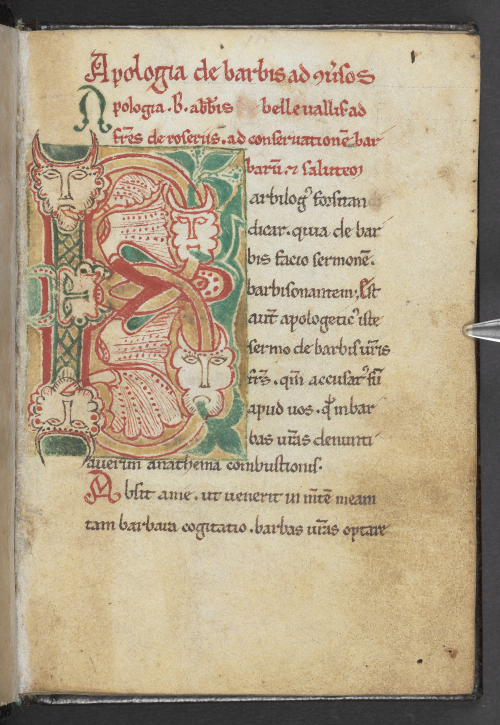 Burchard’s ‘barbilogy’ survives in only one manuscript (Add MS 41997). It starts with what it means to grow a beard, then goes on to describe different types of beards, styles and treatments, and to give beard-related advice. Burchard mentioned more than 10 styles of beard, including one ‘urban’ (urbana figuratio) and one military, which, he added, does not go well with long hair. There was the beard that covers the chin (barba mentanea), that from under the chin (submentanea), and the side beard (barba maxillaris). We are told that long sideburns and the beard under the chin make the face resemble a goat, while moustaches reaching to the ears resemble a wild boar. There is inequality between men according to their beards: there are those with precocious beards (citiberbes), those with late-developed beards (tardiberbes), those whose beards are thin and whispy (rariberbes), and those with even, bushy beards (pleniberbes). 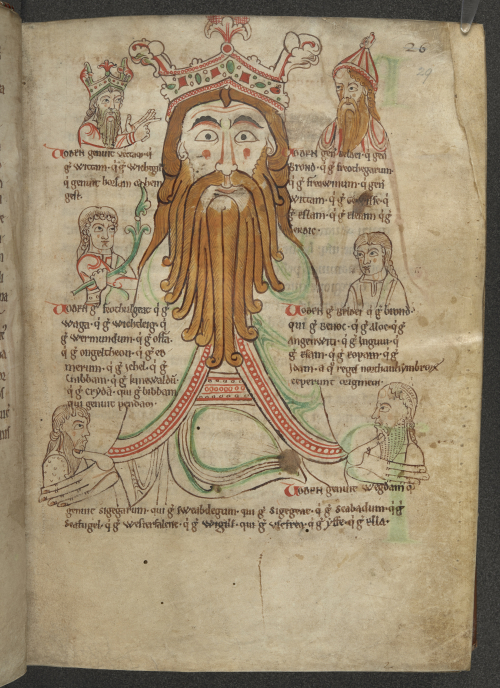 According to the barbilogist, there was a close link between a man’s beard and his spiritual life. A beard could save a man’s life, or it could drag him straight to Hell, where there would be weeping, gnashing of teeth and, as Burchard noted, the burning of beards. 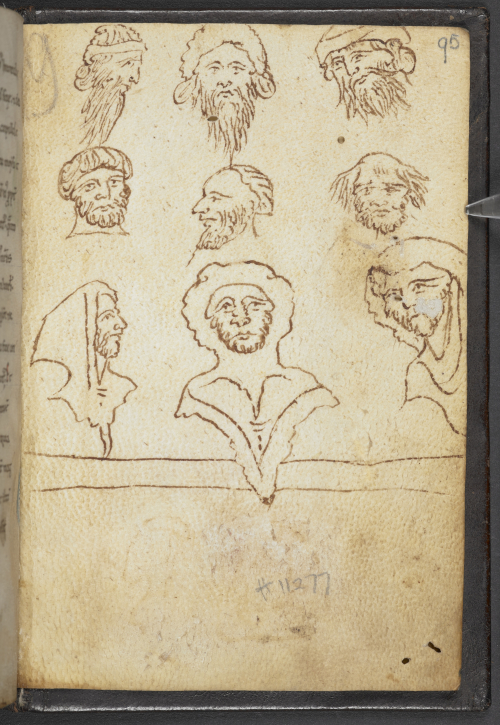 A drawing of nine bearded figures from the late-medieval period added at the end of Burchard’s ‘Defence’ and inspired by it (France, 12th century): Add MS 41997, f. 95r

Burchard warned furthermore that a long beard might become a hindrance and an object of contempt in the eyes of the beardless. This is mirrored by an image in another manuscript (Arundel MS 155), which depicts Goliath with a long, pointy beard, before a clean-shaven David cuts off his head. 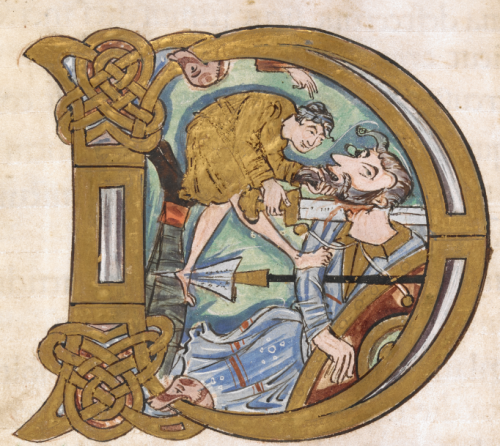 A clean-shaven David holding Goliath by the beard before cutting off his head (England, 11th century): Arundel MS 155, f. 93r

According to Abbot Burchard, a suitable, well-trimmed beard was a symbol of strength, maturity, wisdom and religion. For instance, we are told that a half-beard, meaning a lonely moustache, was a 'monstrous sign'. The connection between beards and medieval notions of masculinity is suggested by an entry in an 11th-century dreambook (concerning the interpretation of dreams) — dreaming of having one’s own beard cut meant that something terrible would happen to you.

The manuscript containing Burchard's treatise is part of The Polonsky Foundation England and France Project, which is launching in one week! Stay tuned for more information on 21 November. The conference website is here.