If you are an Anglo-Saxonist, you may have heard of two significant places: Brunanburh and Clofesho. The former is remembered as the site of a momentous battle, and the latter was the meeting place for a series of influential Church councils. But both places are enigmatic. Their locations have never been identified with any certainty, and have puzzled scholars for hundreds of years.

Today we ask you to help us name that place: we welcome suggestions at the foot of this blogpost or via our @BLMedieval Twitter account. To assist you, here are some clues from manuscripts currently on display in our once-in-a-generation exhibition, Anglo-Saxon Kingdoms: Art, Word, War. 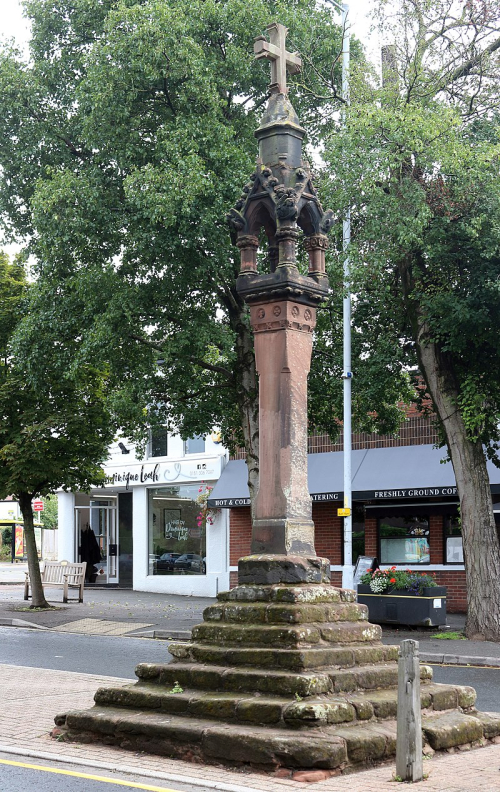 Did the battle of Brunanburh take place in Bromborough, near the site of this market cross?

Brunanburh was the site of a significant battle in 937, fought between King Æthelstan of England and an alliance of kings from northern Britain: King Olaf of Dublin, King Constantine of Alba (now Scotland), and King Owain of Strathclyde, a British kingdom in the North-West.

One of the earliest sources for the battle is the Old English heroic poem The Battle of Brunanburh, as preserved in some manuscripts of the Anglo-Saxon Chronicle. The opening of the poem describes Æthelstan’s ‘long-lasting glory forged at the fighting with swords’ edges around Brunanburh’. 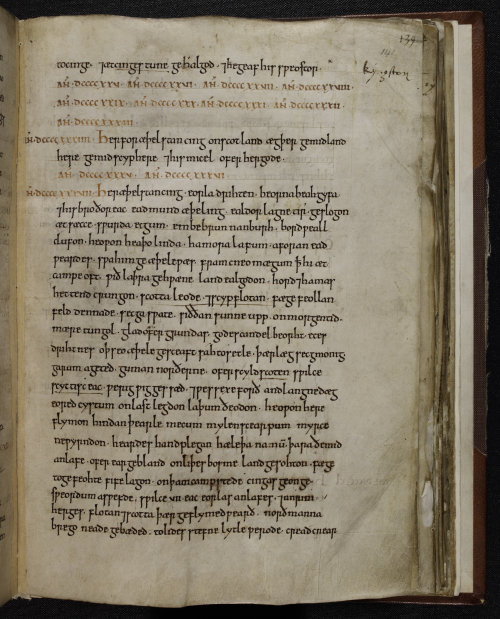 The beginning of the battle of Brunanburh in the Anglo-Saxon Chronicle: Cotton MS Tiberius B I, f. 141r

Other medieval accounts of the battle provide alternative spellings of its name. The oldest manuscript of Annales Cambriae records the battle as Bellum brune; while Symeon of Durham, writing in the 12th century, said it was fought at ‘Wendun, which is called by another name et Brunnanwerc or Brunnanbyrig’. 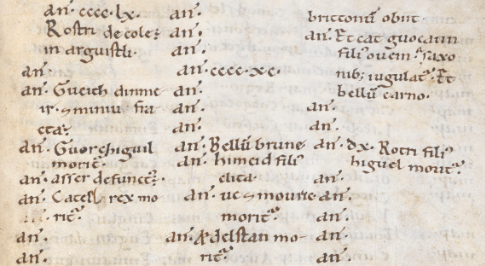 Brun-, the recurring element in all these place-names, is perhaps a personal name, a river name or the Old English or Old Norse word for spring or stream. The suffixes –burh/-wec and -dun are the Old English words for fortification and a low hill.

More than 30 different places have been suggested for the battle of Brunanburh. Considering that some of the forces that engaged King Æthelstan came from Dublin, Scotland and Strathclyde, most suggestions have been located in northern England or southern Scotland. There are also plenty of references in the poem to warriors arriving or departing by ship. Here the poet paints a graphic image of the chief fleeing the battle:

There was put to flight

The Northmen’s chief, driven by need

To the ship’s prow with a little band.

(Michael Livingston, The Battle of Brunanburh: A Casebook, Exeter, 2001)

It would make sense for the site to have had easy access to the coast or a riverbank. Some places proposed as the site of this famous battle include:

If you were to choose the site for a climactic Anglo-Saxon battle, where would it be?

If you're unable to identify Brunanburh, perhaps you might turn your attentions to identifying Clofesho. In Bede’s Ecclesiastical History of the English People, completed in 731, he described an important synod organised by Archbishop Theodore in 670. One outcome of this meeting was the decision to hold a council once a year at a place known as Clofesho. These councils provided the opportunities for bishops from distant locations to gather and make important decisions about the Anglo-Saxon Church. 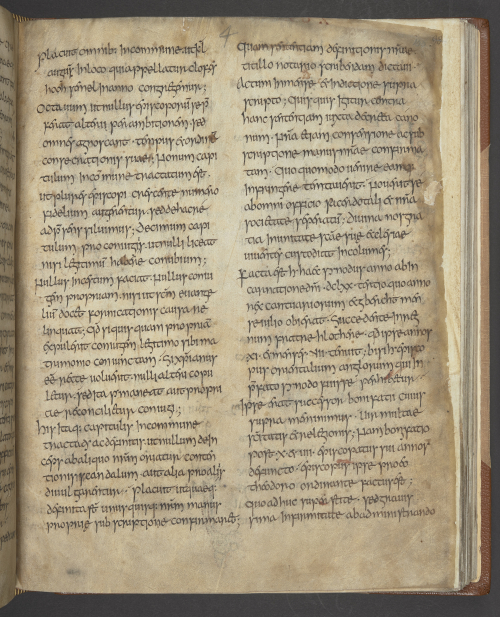 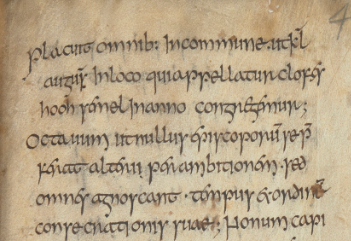 Bede’s account of the origin of the tradition of holding a synod at Clofesho. ‘Clofaeshooh’ is mentioned in lines 2–3 in the left-hand column: Cotton MS Tiberius C II, f. 100r

Over the next 150 years, Clofesho became a meeting place of great symbolic importance in the Anglo-Saxon Church. One of the most significant councils at Clofesho was held in 803, when it was confirmed that the archiepiscopal see of Lichfield would once again be classed as a bishopric. Lichfield had been promoted to the status of an archbishopric in 787, at the request of King Offa of Mercia. The charter produced at the council of Clofesho in 803 confirmed that Lichfield once again fell under the authority of Canterbury. This charter is currently on display in the Anglo-Saxon Kingdoms exhibition. 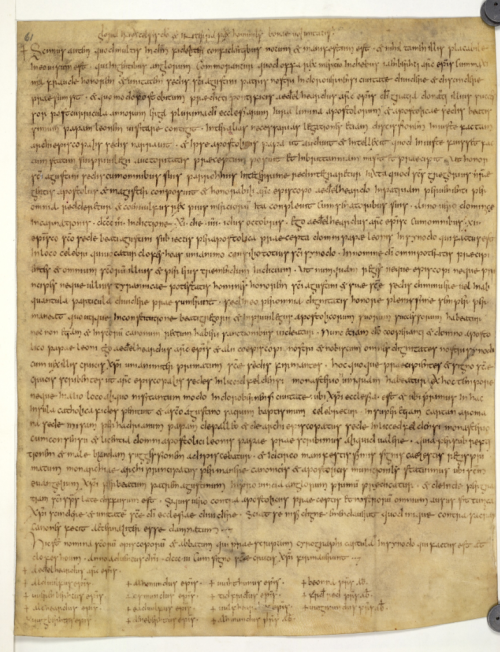 Decree of the council of Clofesho, 803: Cotton MS Augustus II 61

Despite its clear importance, scholars have not been able to identify Clofesho. Bede described the very first council held there, but he did not tell us anything about its location. Since it was used as a meeting place for the entire Anglo-Saxon Church, it makes sense for it to have been sited in a central location, perhaps in the kingdom of Mercia.

Modern places out forward as the site of Clofesho include Cliffe-at-Hoo, Abingdon, Tewkesbury and Hitchin. Another candidate is All Saints Church at Brixworth, Northamptonshire. 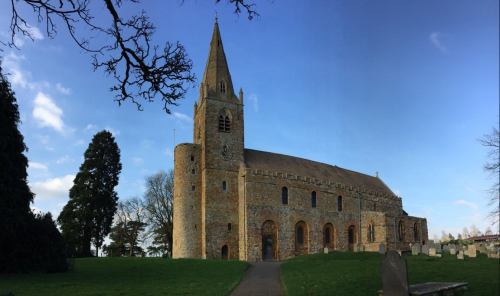 Many elements of the Anglo-Saxon building of All Saints Church, Brixworth, survive intact. Its size suggests that it must have been a place of great importance in the Anglo-Saxon period, but there is no mention of Brixworth in any early sources. The old version of the place-name, Briclesworda, is first recorded in the Domesday survey, commissioned by William the Conqueror at Christmas 1085. In Domesday Book, Brixworth occupied 9.5 hides with land for 35 ploughs, 2 mills and a meadow.

One possibility is that, at some point during the period of Danish invasions, Clofesho was renamed Breclesworda. There are other examples of place-names changing in the Anglo-Saxon period. For example, Streaneshalch became Whitby and Medeshamstede became Peterborough. Did the same happen to Clofesho? Or are you able to suggest a different place for it? 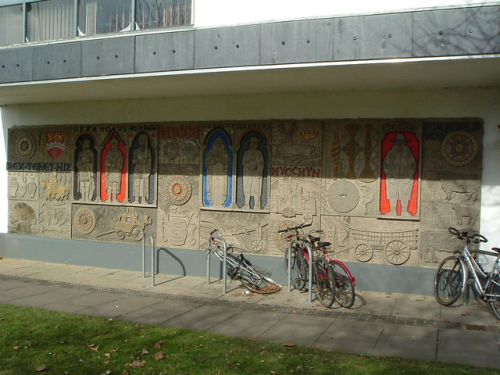 Was Hitchin the original site of Clofesho? This panel, featuring King Offa and the Hwicce, now stands outside the town's library

The British Library's exhibition Anglo-Saxon Kingdoms, featuring glorious manuscripts and extraordinary artefacts, is on display in London until 19 February 2019.

No Anglo-Saxon church has ever been discovered at Brixworth unless you count speculation as 'discovery'. Since neither of the two placenames exist, the obvious conclusion is neither place existed.

Fascinating questions! Re Brunanburh: it is curious that the manuscript tradition of the poem- as can be seen in your photo of the Tiberius manuscript- favours the spelling Brunnanburh: as does the ms of Simeon of Durham (again in your photo); even the "A' manuscript of the Chronicle has an extra n added above the line-( "A' btw is not as good a text of the poem as the Tiberius ms, OEC C , and its exemplar OEC ms B which also has nn)) This would mean not 'Bruna's fort' but 'The Fort at the Spring". Needless to say this would also rule out Bromborough which in any case is dependent only on a 12th c place name.

The apparently Learned Mikel of the Wood has; I am told a Seat of History, which I do not understand. If his seat is history it must be uncomfortable and painful. Poor soul.
But his rejection of the theory "based on a 12C place name" is just as ludicrous as his own pet theory of the battle near a well in the Shire of Eorwic. For he offers no proof either. Because there is none. Not even a place name.
But proof of the true site does exist, and grows. All the ancient texts have clues, and these clues are now understood. The place hides in plain sight.
But besides this, there are...things of iron, bronze....and bones...that show where the Field of Brunanburh lies. Or rather; the fields.
The Guardians of Brunanburh have this knowledge; but have a vow to keep silence. Until all is ready.
Not long now....
King Athelstan.

For me, it is a castle where they had a water well (source), or Brunnen.

For Germans, or SAXONS, with some imagination and linguistic and culture skills there are many interesting things to be found in your English medieval culture.

One of my favourite games as a geographic historian! I've always favoured Mildenhall (middling-hall for theDanes) for Clofesho as it would be a place convenient by navigation (the Wash was tidal to Cambridge) at the junction of Mercia, East Anglia and Wessex. It could easily cater for the large gatherings there with the convenience of a port, rich abbeys all around, and the emporium at Bury St Edmunds. I would also place St Botolph's Icanho at nearby Icklingham (almost an exact translation of Ican-ho into Danish). The importance of the area is confirmed by many rich archaeological discoveries there going back to early Roman occupation.

Re Clofesho, I´ll throw my hat into the ring for Cloves Hill, near Morley, 5 miles NE of Derby. It was recorded as Clowves Hill in 1580 and is a classic “ho”-shaped hill, i.e. a heel-shaped projecting ridge stretching into a plain. It lies in Mercian heartland, 30 miles from Tamworth, 13 miles from Repton, adjacent to a major Roman road (Icknield Street). And it was optimally located for clergy travelling from the main religious centres in 7th century England, being roughly equidistant (160 miles) from the sees of Rochester, Winchester, Dunwich, Elmham and Hexham. Just a wild guess. We´ll probably never know.

Just back from the exhibition today … and completely exhilarated. Truly wonderful!

I saw the mystery of Clofesho and was immediately struck by one thing. 'Sho' is similar to the Scandinavian pronunciation of 'skov' (or 'forest/wood' in English). It survives in many of our Northern place-names as 'shaw'.

I have no bright suggestions for where Cloveshaw or Cloveswood might be, but it may be a line of thought worth exploring.

Needless to say this would also rule out Bromborough which in any case is dependent only on a 12th c place name.......