‘Arise, O Lord, and may your enemies be torn apart’: the Staffordshire Hoard in Anglo-Saxon Kingdoms

‘Arise, O Lord, and may your enemies be torn apart and those who hate you will flee from your face.’

So reads (in English translation) an inscription on an object in the famous Staffordshire Hoard, discovered by metal-detectorists in 2009. We are delighted that a selection of gold and silver treasure from that hoard can currently be seen in the British Library's landmark exhibition, Anglo-Saxon Kingdoms: Art, Word, War. These items are on display in London thanks to the generosity of Birmingham Museums Trust and the Potteries Museum and Art Gallery, Stoke-on-Trent. 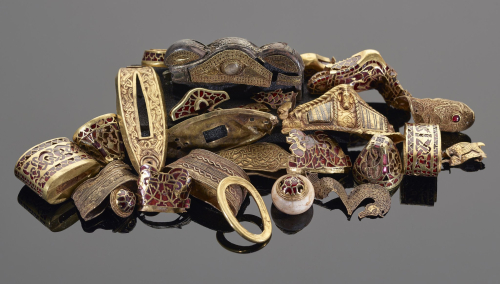 Part of the Staffordshire Hoard: © Birmingham Museums Trust and the Potteries Museum and Art Gallery, Stoke-on-Trent

The incredible Staffordshire Hoard, comprising around 4,000 items, was found in a field near the village of Hammerwich. The hoard's purpose and the precise date that it was deposited are open to question. Some experts have suggested that the hoard was buried in the ground before 675, although certain of the objects may have been around 100 years old at this time.

This area of Staffordshire was in the heartlands of the Anglo-Saxon kingdom of Mercia. In Bede’s Ecclesiastical History of the English People, he described the military campaigns of Penda, the powerful Mercian king, against the neighbouring kingdoms of Northumbria and East Anglia. Almost all of the objects in the Staffordshire Hoard are martial and were most likely used by Anglo-Saxon warriors. Perhaps the hoard was brought together following battles between the armies of Mercia, Northumbria and East Anglia. 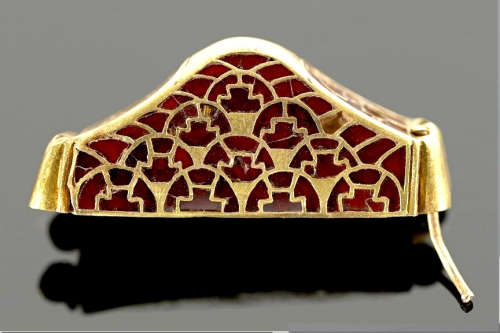 A sword pommel from the Staffordshire Hoard: © Birmingham Museums Trust and the Potteries Museum and Art Gallery, Stoke-on-Trent

The Staffordshire Hoard contains an extraordinary number of hilt fittings taken from the decorated handles of swords and knives. The hoard also features gold and garnet strips which may have been mounted on other weapons or armour. It's also intriguing to note that many of the objects were deliberately damaged before they were buried in the ground. Perhaps that was done to render them useless or somehow to destroy their symbolic power. The Staffordshire Hoard also includes items with explicitly Christian connections. Shown above is an ornamental pectoral cross with a stunning garnet at the centre. It may have been used by a high-ranking cleric or a Christian nobleman. Another Christian object is this metal strip, with the aforementioned inscription from the Old Testament Book of Numbers (‘Arise, O Lord, and may your enemies be torn apart and those who hate you will flee from your face’). 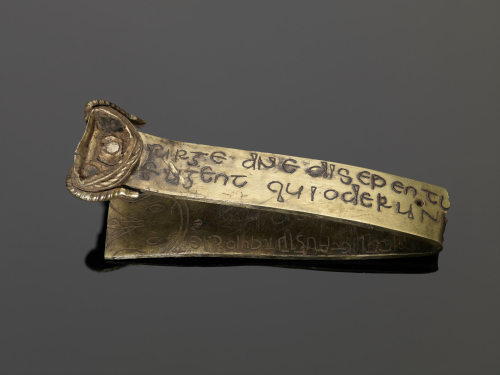 One of the chief advantages of displaying parts of the Staffordshire Hoard in conjunction with other artefacts and manuscripts is that it underlines similarities in their decoration. For instance, many objects in the Staffordshire Hoard fuse together gold and garnets. The garnets were cut into specific shapes to fit into the pattern work, while some of the gold filigree, made from gold wire and twisted to look like little beads, is less than one millimetre thick. They were then fashioned into stylised animals or stretched out in thin ribbons of intertwined interlace.

Gold and garnet decoration was used in other metalwork on display in Anglo-Saxon Kingdoms. This can be seen, for example, in the Sutton Hoo sword-belt and belt buckle (on loan from the British Museum) and the Winfarthing pendant (on loan from Norfolk Museums Service), which were also found in the former territory of the kingdom of East Anglia. 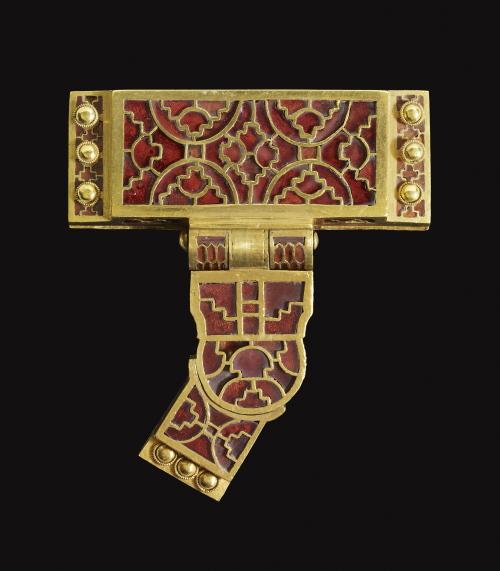 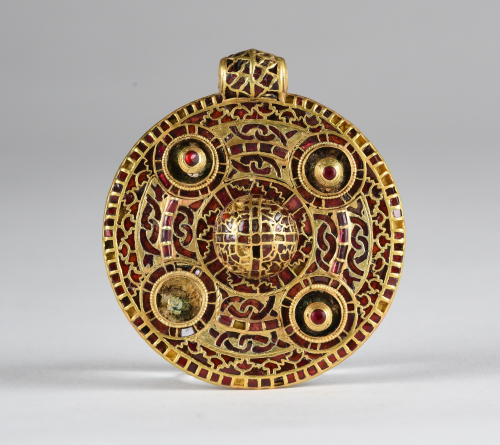 Some of the interlace patterns in the Staffordshire Hoard also bear similarities to the decoration of Insular gospel books made in the late 7th and early 8th centuries. A particularly vivid example of this style of decoration is found in the Echternach Gospels, which has been loaned to the Anglo-Saxon Kingdoms exhibition by the Bibliothèque nationale de France. 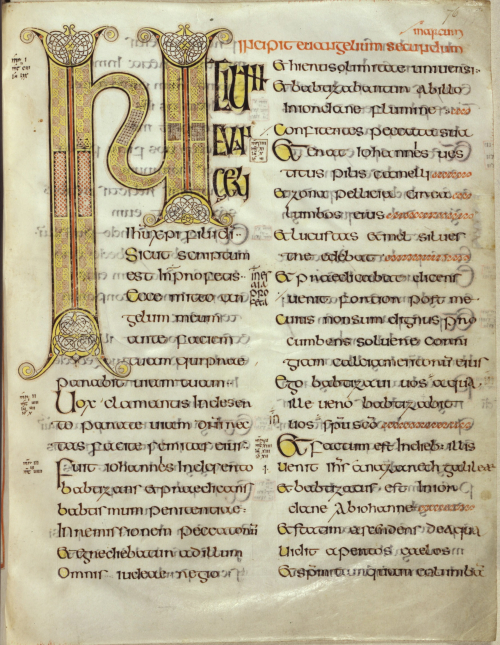 The opening to the Gospel of Mark in the Echternach Gospels: Paris, Bibliothèque Nationale de France MS Latin 9389, f. 76r

The style of script and decoration of this gospel book suggests that it was produced in a scriptorium with strong Insular influences, possibly in Ireland, Northumbria or Echternach (in modern-day Luxembourg). The letters ‘IN’ on the page above are decorated with red and yellow interlace designs, and surrounded with miniature red dots. This design and colour palate is similar to the gold and garnet designs and gold filigree decoration of the Staffordshire Hoard. 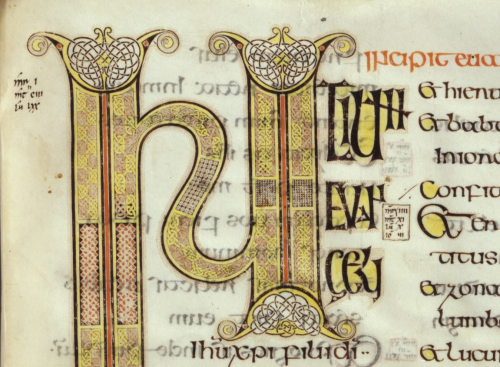 We are very excited to have these fascinating objects from the Staffordshire Hoard in the British Library's Anglo-Saxon Kingdoms exhibition. The hoard bears witness to Mercian martial power in the 7th century: many of its objects were infused with Christian symbolism, and they drew on artistic trends witnessed across the Anglo-Saxon kingdoms and the wider Insular world.

Anglo-Saxon Kingdoms is on display in London until 19 February 2019. You can buy tickets here.