The cloak of St Martin of Tours

Today is the feast of St Martin of Tours (c. 317–397). According to medieval accounts about his life, Martin was a Roman soldier who converted to Christianity after an encounter with a half-naked beggar at the gate of the city of Amiens in northern France. Martin cut his cloak in half in order to share it with the beggar, who that night appeared to him in a dream-vision and revealed himself to be Christ.

This experience encouraged Martin to renounce the army and become a ‘soldier’ of Christ. He founded a hermitage in Ligugé that would become the first monastery in Gaul, was appointed bishop of Tours in 371, and then founded and became abbot of the abbey of Marmoutier, located outside the city of Tours. After his death, St Martin was associated with many miracles and he became the patron saint of France. 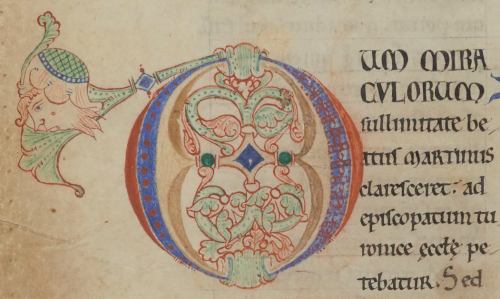 Central to St Martin’s cult was the relic of the remaining half of his cloak. It was deemed to be so important that the kings of France used it as a royal banner in war, and they swore sacred oaths upon it. The structure in which the half-cloak was preserved was referred to as cappella (‘little cloak’), a term that came to be used widely for buildings that served to keep relics and from which the modern word ‘chapel’ is derived.

The legend of St Martin’s cloak was first recorded in the Vita sancti Martini (Life of St Martin) of Sulpicius Severus (363–c. 425). This work survives in a number of medieval copies, such as the 12th-century manuscripts Cotton MS Tiberius D IV/1 and Harley MS 4984, both possibly originating from England. 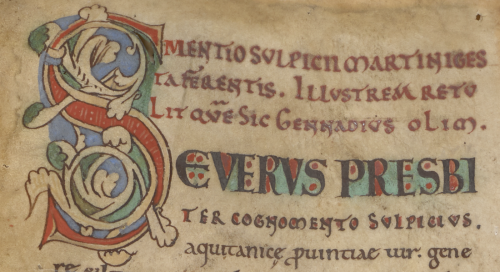 As a symbol of the Christian virtue of Charity, St Martin’s act of dividing the cloak became the most often-cited episode from his life, and was made the subject of many medieval works of art and literature. One example is the full-page miniature shown below, in a 12th-century manuscript (Add MS 15219) from the Benedictine abbey at Tournai (now in Belgium) that was dedicated to St Martin. 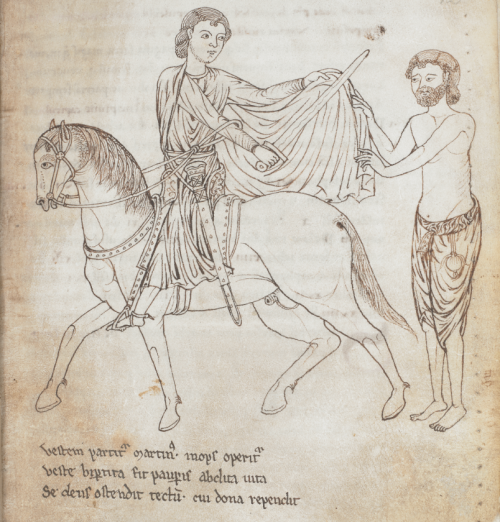 The cult of St Martin appears to have gained much support in England following the Norman Conquest. After William the Conqueror (reigned 1066–1087) invaded England, many new English churches were dedicated to St Martin, most likely because he was popular among the Normans. Around 1071, William himself founded the Benedictine abbey of Battle, also known as Sancto Martino de Bello, at the site where the decisive Battle of Hastings had taken place.

Further testament to the longevity of the popularity of St Martin’s conversion miracle is a Middle English poem, which cites the Vita sancti Martini of Sulpicius Severus. This poem was added in the 16th century at the end of a manuscript containing a chronicle from Peterborough Abbey (Cotton MS Claudius A V):

To servise god he so wele happyd

(The night after the day it ensued,

[when] Martin was sleeping in his bed,

[that] Christ appeared with a multitude of angels,

he [i.e. Martin] was ‘enfolded’ into Christian faith,

Christianised and baptised according to the new law,

to serve God [who] he clothed so well.

Jesus made this announcement to him:

‘Martin, still a catechumen, has clothed me with this mantle’.)

The manuscripts featured in this blogpost are part of The Polonsky Foundation England and France Project, which is launching soon. Stay tuned for more information on 21 November. The conference website is here.