The real Lake of Grendel

What if we told you that Grendel’s lake — the scene of the epic underwater battle in the epic poem Beowulf — was a real place? Well, it was, according to a charter written in 931. 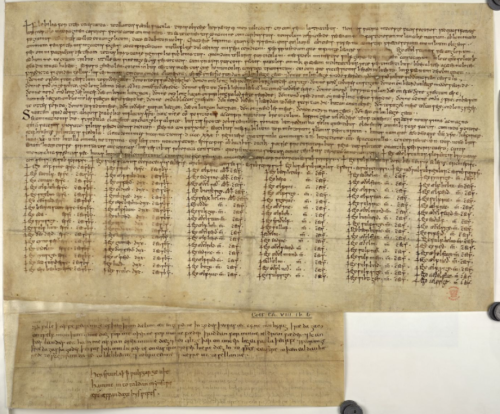 This charter is a grant of land in Ham from Æthelstan (d. 939), the first king of England, to his ‘faithful official’ Wulfgar. The amount of land involved is considerable: 9 hides, or roughly the size of 9 Hyde Parks. In order to be clear about exactly which pieces of land were being transferred, this charter, like many other Anglo-Saxon documents, included a boundary clause in Old English, describing the path you would walk around the edges of the gift.

'First, [go] to the east ... Then westward to the mossy bank. Then down to the hedge/boundary of Beow’s home, eastward to the blackberry thicket. Then to the black pit/cave. Then north by the head to where the short dyke [is]. [Take] out of this one acre, then [go] to the bird’s pond (mere) to the path ... After that to the long meadow. Then to Grendel’s lake (mere). Then to the hidden gate, then back east ... '

Since the landscape includes Beow’s home and Grendel’s lake, it is tempting to think that these names were inspired by the poem Beowulf (although Beowulf is set in Scandinavia, not Wiltshire). At least three other Anglo-Saxon documents mention ‘Grendel’: there is another instance of ‘Grendel’s lake’, there’s a reference to ‘Grendel’s gate’, and on charter has an added boundary clause referring to ‘Grendeles pytte.’ 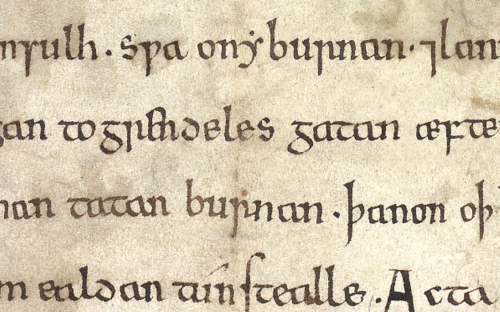 ‘Grendeles gatan’ (line 2), from a record of Archbishop Dunstan purchasing land to give to St Peter’s Westminster, England, second half of the 10th century: Stowe Ch 32

Of course, some people have suggested that these Grendels aren’t ‘Grendels at all, but rather a ‘green delf’ (green quarry) or even Greendales. However, the association with pits and swamps does link these names to some sinister places from Old English literature. Alternatively, a ‘grendel’ could have been a generic term for 'monster', and these 'grendels' could have inspired the poem, and not the other way around. Whichever way, this charter provides a vivid account of one corner of the landscape of early 10th-century Wiltshire, as well as offering some intriguing possibilities about the mental associations and myths that overlaid that landscape in the minds of its early medieval inhabitants. 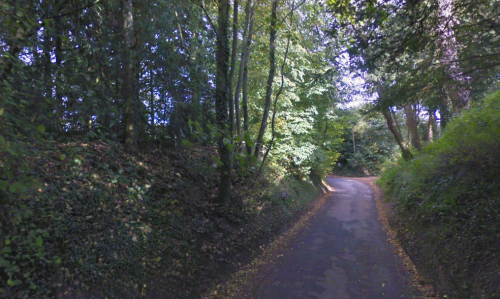 A road near Ham today, courtesy of Google Street View

Beyond the shades of Beowulf, this document is interesting for a number of reasons. It is a work of literature in and of itself. It begins with a dramatic preface, lamenting the costly sins of the ‘tottering’ world and ‘filthy and dreadful mortality’. It urges the audience to flee the ‘wearisome nausea of melancholy’ and instead hold to the Gospels’ promise: ‘Give and it will be given to you.’ This purple prose was drafted by the same scholar who composed many of King Æthelstan’s early charters. Æthelstan’s court was a cosmopolitan centre of learning that attracted scholars from all over the British Isles and Europe. The drafter of this charter was clearly highly educated, with a particularly intricate knowledge of Latin and frequently using Latin words so obscure that they only appear in one or two other sources.

This charter also touches on major political developments in the British Isles, even though it is ostensibly concerned with land in Wiltshire. In the text of the charter, Æthelstan is described not only as ‘king of the English’ (rex Anglorum), but as ‘king with sole rule of flowering Britain’. This language reflects Æthelstan’s military and political ambitions. Six years later, Æthelstan would win a major battle at Brunanburh against the massed forces of the king of the Scots, the king in Dublin, the king of Strathclyde, and others.

Detail of the names of the Welsh sub-kings, Hywel (Howael) and Idwal (Iudwal): Cotton Ch VIII 16

The charter suggests that, in 931, Æthelstan already had control over a fairly substantial portion of the British Isles. The charter was witnessed by, among others, two Welsh ‘sub-kings’: Hywel Dda of Deheubarth (d. 949/950) and Idwal Foel of Gwynedd. Hywel was later credited with codifying Welsh law and he may be the only early medieval Welsh ruler who issued surviving coins. He also frequently visited England and even called one of his sons Edwin, an English name (whether out of taste or political expediency). Idwal allegedly died fighting the English in 942. However, he witnessed several of Æthelstan’s charters and there is no evidence he fought against Æthelstan at Brunanburh.

From Beowulf to bramble thickets to British kings, this charter is a good example of the wealth of material that single-sheet documents can contain. Today, the charter is even attached to the will of the recipient, Wulfgar, which reveals how he bequeathed his land and offers further insight into his social networks.

The question is if the original mere of Grendel was a lake after all?

The Old English word mere can be translated into lake – but could also refer to the sea or the ocean. If the traditional view on the mere is widened, we have the possibility that the hideout of Grendel and his mother was not located inland at some mysterious lake, but at the seashore instead. This suggestion is perhaps also influenced by the fact that the mere held a mysterious glowing during the night but was described as bloody red during the day, when the Geats and the Danes were searching out Grendel’s mother for revenge. The night glow and the red water leads us to the sea, as these colours most probably can be connected to the phenomenon of sea sparkle or bioluminescence.

An existing place in Denmark with moors, dark forests and high cliffs by the sea is the most likely place for the original scene of the episode in Beowulf.