Through many hands: the Vespasian Psalter

The British Library's current major exhibition, Anglo-Saxon Kingdoms, is a treasure-trove of marvellous manuscripts and astonishing artefacts. One of those many treasures is an 8th-century manuscript known as the Vespasian Psalter (Cotton MS Vespasian A I). Here we piece together its fascinating history. 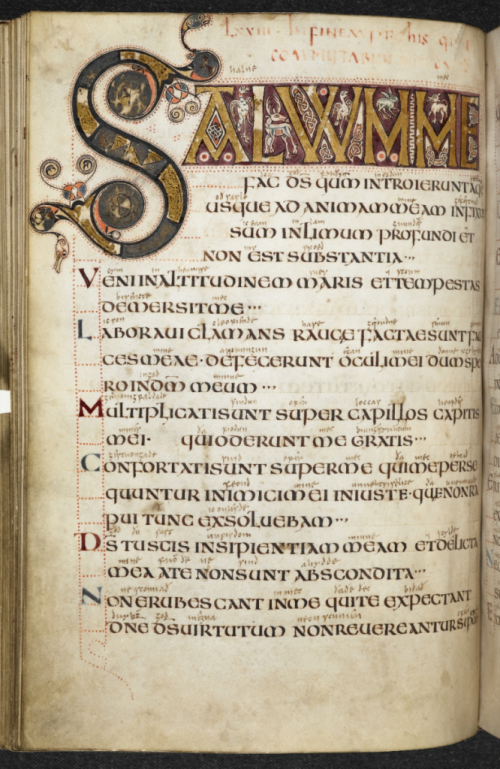 The opening of Psalm 68 (‘Salvum me fac’) from the Vespasian Psalter, ?Canterbury, 2nd quarter of the 8th century: Cotton MS Vespasian A I, f. 64v

The Vespasian Psalter is a wonderful witness to the ongoing processes of creation, addition and loss in a medieval manuscript. Its story begins in the second quarter of the 8th century, around the time Bede was completing his Historia ecclesiastica gentis Anglorum (731).

Detail of the opening of the hymn ‘Splendor Paternae Gloriae’ by Ambrose of Milan: Cotton MS Vespasian A I, f. 152r

It was designed from the outset as a song-book. The core part of the manuscript contains not just the Psalms but also a selection of canticles and hymns, including two written by Ambrose of Milan. These were all copied out in an elegant Insular uncial script, with headings in rustic capitals. 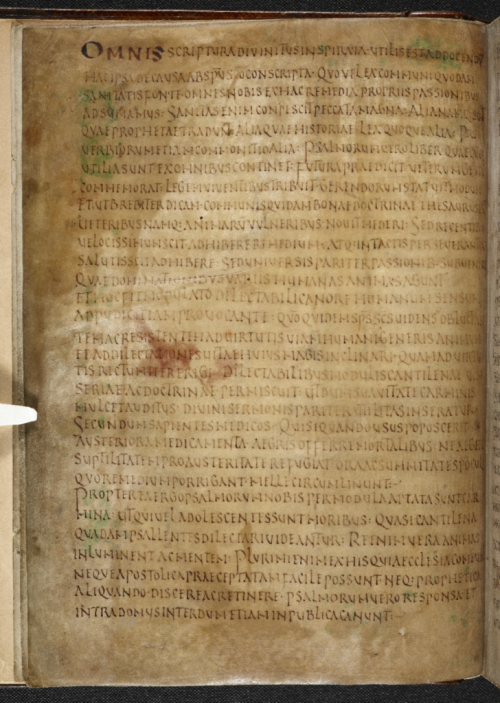 The opening of Basil of Caesarea’s ‘Homily on the First Psalm’, translated by Rufinus: Cotton MS Vespasian A I, f. 2v

In the 9th century, several leaves were added to accommodate supplementary material. The manuscript henceforth was prefaced by Basil of Caesarea’s Homily on Psalm 1, epistles between Jerome (the Psalms’ translator) and Pope Damasus I, and various texts relating to the origin, division, performance, interpretation and ordering of the Psalms. These were all designed to expand upon the core of the manuscript and facilitate its use and study. 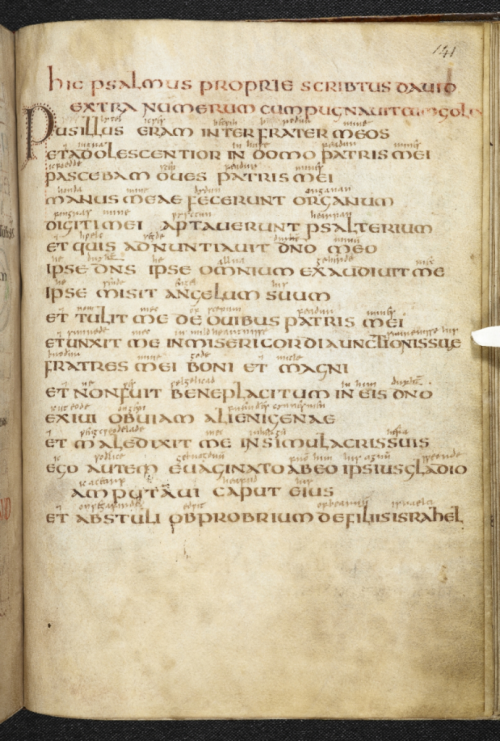 Jerome translated the Psalms not from the Masoretic (Hebrew) text of the Bible, but from the Septuagint (Greek) version. Itself a translation from the Hebrew into Greek, the Septuagint remains the preferred text in the Eastern Orthodox Church. The numbering adopted by the two versions is slightly different, primarily as a consequence of differing interpretations of how certain psalms should be divided. The Septuagint also includes an additional Psalm, numbered 151, not found in the Hebrew text. In the Vespasian Psalter, a single leaf was inserted between the end of Psalm 150 and the beginning of the first canticle to make space for its inclusion.

Detail of Anglo-Saxon neumes added to the end of Psalm 150 (‘Laudate dominum in sanctis eius’), with an additional noted line and explicit: Cotton MS Vespasian A I, f. 140v

Cadences were added to selected verses of Psalms 148–150, to provide a guide for their chanting, with Anglo-Saxon neumes added at the end of verses and half-verses.

It is not known who was responsible for instigating or executing each of these additions to the manuscript. However, the hands of two scribes who were intimately connected with Canterbury have been identified in the Vespasian Psalter, shedding light not only on its continued augmentation but also on a curious blip in its provenance.

Detail of the opening of Psalm 94 (‘Deus ultionum’) with interlinear Old English gloss: Cotton MS Vespasian A I, f. 90r

The first scribe is known as the Royal Bible Master Scribe, after his role in Royal MS 1 E VI, and his hand is known in other manuscripts from St Augustine's Abbey, Canterbury. Around the second quarter of the 9th century — amidst the other supplementary activities in the manuscript — he added an interlinear Old English gloss to the Psalms. It has the distinction of being the oldest extant translation into English of any biblical text. 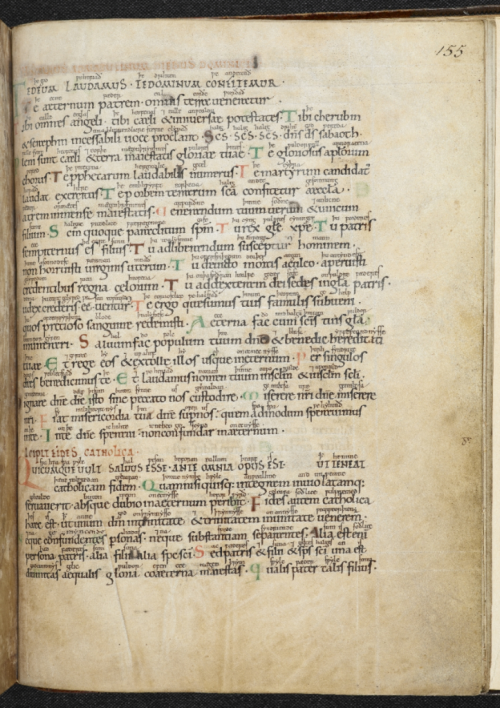 The second scribe is known by name: Eadwig Basan. He added several texts to the manuscript two centuries later: another hymn (for matins on Sunday), the Athanasian Creed, an Oratio by Eugenius of Toledo, and a confession prayer by Alcuin. These in turn were given an Old English gloss shortly afterwards, bringing them into line with the rest of the volume. 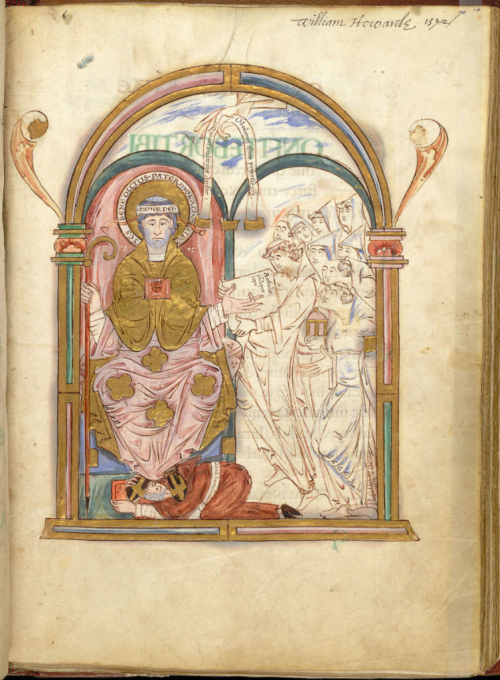 Knowledgeable readers will have spotted that Eadwig’s name is usually associated not with St Augustine’s Abbey, but its neighbour Christ Church, Cathedral. His hand has been identified in several Christ Church books: most notably his eponymous Psalter (Arundel MS 155), in which he may be the figure prostrate at the feet of St Benedict in a full-page miniature; the Harley Psalter (with two other scribes, Harley MS 603) and the Cnut Gospels (an addition on f. 44v; Royal MS 1 D IX). He is famously memorialised with a full-page portrait of him at work in another Psalter that bears his name (Cambridge, Trinity College, MS R.17.1). Full-page miniature of David and the musicians (described by Thomas of Elmham in his history): Cotton MS Vespasian A I, f. 30v

The circumstances in which Eadwig made his additions to the Vespasian Psalter are not known. Whether he went to St Augustine’s or the book to Christ Church, it is clear that the Vespasian Psalter was at St Augustine’s for several further centuries. Thomas of Elmham’s history of St Augustine’s, written in the mid- to late 1410s and preserved in Cambridge, Trinity Hall, MS 1, described a Psalter that was kept on the high altar of the abbey church — a Psalter whose description exactly matches the present manuscript. 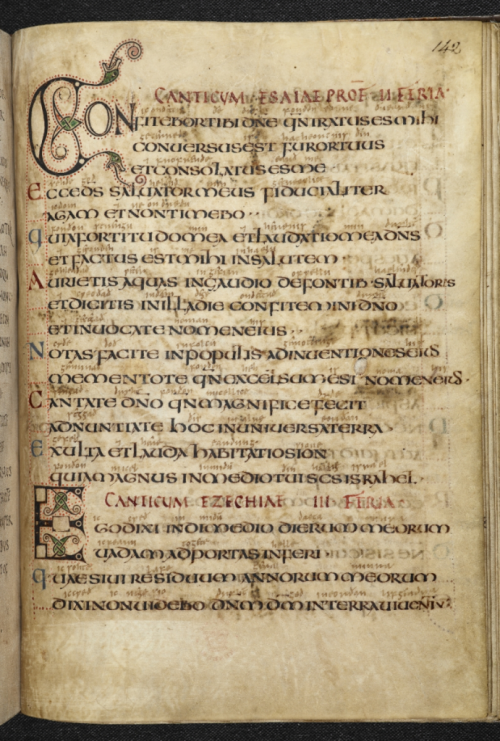 Two canticles, with the off-print from a missing carpet page: Cotton MS Vespasian A I, f. 142r

Following the dissolution of St Augustine’s in 1538, the Psalter found its way into the hands of William Cecil, Elizabeth I’s chief minister. The manuscript had suffered losses in the interim. The opening few leaves of the Psalms were gone; Elmham’s description indicates that they contained a depiction of Samuel, perhaps in the form of a full-page miniature at the opening of the text. A carpet-page also once adorned the manuscript: all that remains is a shadowy, cruciform off-print on f. 142r. Cecil lent the book to Matthew Parker, archbishop of Canterbury. Although Parker dutifully returned it in 1566, his desire to keep it is obvious: in the accompanying letter, he dropped a hint to that effect, writing to Cecil that the Psalter is ‘remitted again to your library: in the riches whereof, videlicet of such treasures, I rejoice as much as they were in my own’. Parker lamented the losses at the opening of the Psalms and described to Cecil how he would have had them made good, had the manuscript been his: moving the miniature of David (f. 30v) to the beginning and having the missing text ‘counterfeited in antiquity’ (i.e. copied to resemble the Insular uncial used for the Psalms). 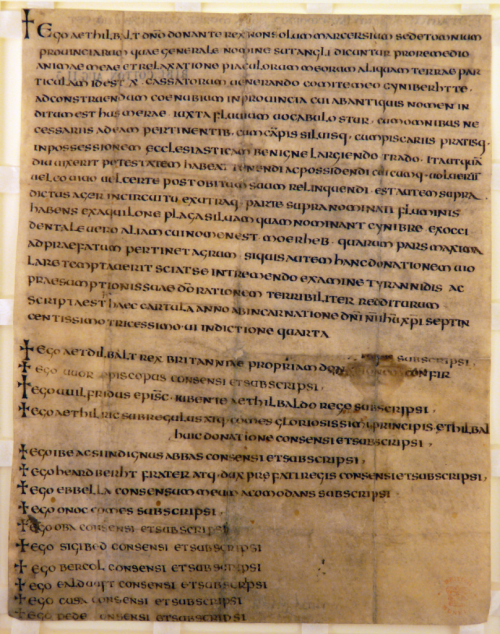 It was Robert Cotton — who acquired the manuscript in 1599, a year after Cecil’s death — who addressed these deficiencies in his own unique way. He first inserted a charter of King Æthelbald of Mercia, and trimmed its edges so that it would fit. Cotton’s rationale (it seems) was that the charter provided a further example of Insular uncial. He may also have suspected, but cannot have known, that the charter was closely contemporary to the Vespasian Psalter’s production, being dated to 736. Christ in Majesty, from a psalter, England (East Anglia or London), Cotton MS Vespasian A I, f. 1r Full-page foliate initial ‘B’ inhabited by men and animals, from Psalm 1 (‘Beatus vir’), from a psalter, England (East Anglia or London), Cotton MS Vespasian A I, f. 1v

At some juncture this charter was removed (it is now Cotton MS Augustus II 3) and in its place was put a leaf from the beginning of an English Psalter of c. 1220. On one side is Christ in Majesty and on the other a large decorated initial B and the opening words of the first Psalm. This is a better fit with the content, if not the decorative style, of the rest of the manuscript. Detail of a cutting containing the coat of arms of Margaret of York impaled with those of her husband Charles the Bold, with her motto (‘Bien en aviegne’) and their initials ('CM'), by the Master of Mary of Burgundy illuminator, from the Breviary of Margaret of York: Cotton MS Vespasian A I, f. 160v

Cotton made a further incongruous addition at the end of the manuscript: he pasted in a cutting from the Breviary of Margaret of York. Other excisions from this late 15th-century devotional book are present in other Cotton manuscripts – Cotton MS Tiberius A II, ff. 1r–1v, Cotton MS Galba A XVIII, f. 2r, and Cotton MS Titus C XV, f. 1r – and the much-mutilated remnant survives as Cambridge, St John’s College, MS H.13. 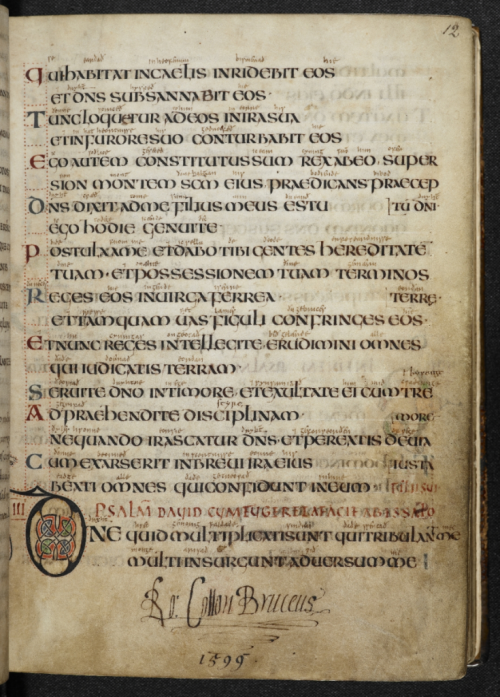 Fragment of Psalm 2 and opening of Psalm 3 (‘Domine, quid multiplicati sunt’), and the inscription of Robert Cotton: Cotton MS Vespasian A I, f. 12r

The Vespasian Psalter escaped the Ashburnham House fire of 1731 completely unscathed — but by that time, as we have seen, it was in far from its original state. It is remarkably well-preserved for a book that is close to 1300 years old, but its life was demonstrably one of use and re-use: its developing role in the liturgy, its reading and translation, its decoration, and its mutilation and repair. It is the involvement of so many hands in the manuscript over so many centuries that has given it such a textured and fascinating history.

You can see the Vespasian Psalter with your own eyes in the once-in-a-generation Anglo-Saxon Kingdoms exhibition, on display at the British Library in London until 19 February 2019.