A calendar page for December 2018

It’s December! Hard to believe that 2018 is almost over. But before the year comes to an end, we’ve got a few things to thresh out, literally … 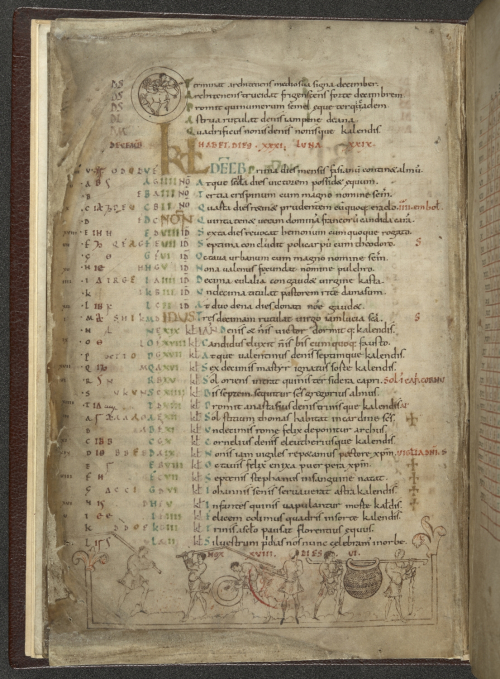 Calendar page for December, made in southern England in the first half of the 11th century: Cotton MS Julius A VI, f. 8v

This is the page for December in a 1000-year-old calendar made in southern England. You can currently see the calendar on display in the British Library’s once-in-a-generation Anglo-Saxon Kingdoms exhibition.

The page for December is accompanied by an image of men threshing and winnowing grain. Grain was harvested in ears. To separate the kernels out from the husks, the ears of grain were beaten with flails, as seen on the left of the image. 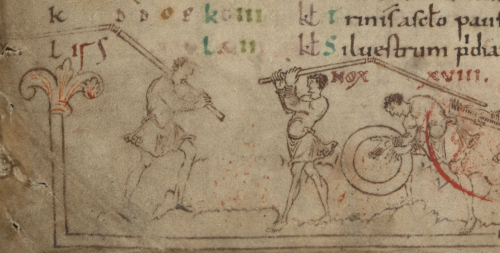 There was then a second process, winnowing, to ensure the edible parts of grain were separated out. Traditionally, winnowers toss the kernels in a basket or winnowing-fan. The heavy, edible kernels fall back down, while the undesirable chaff blows away. 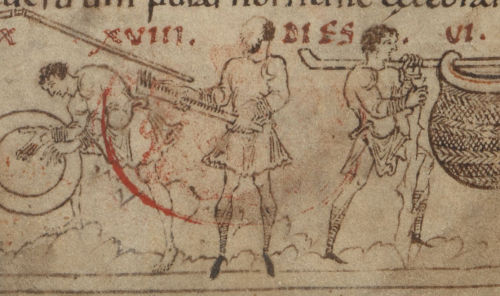 In the middle of the image, there is a man with stick which is not a flail. It has a serrated edge near the top, and horizontal lines all the way down. Another depiction of it can be found in a related calendar (Cotton MS Tiberius B V/1, shown below). This might be another farm implement, but Debby Banham and Ros Faith have suggested that this man might be an overseer with a tally stick, counting how much grain had been prepared.

This gives a precious insight into the organisation of farming and landscape in 11th-century England. Very few notes on day-to-day farm work survive: the only exception seems to be the Ely Farming Memoranda (also on display in our Anglo-Saxon Kingdoms exhibition). The organisation and records of English farming were part of the reason England became such a wealthy kingdom, and this organisation underpinned the impressive administrative achievement of Domesday Book. (At the risk of sounding like broken record, you can even see Domesday Book in the Anglo-Saxon Kingdoms exhibition.) 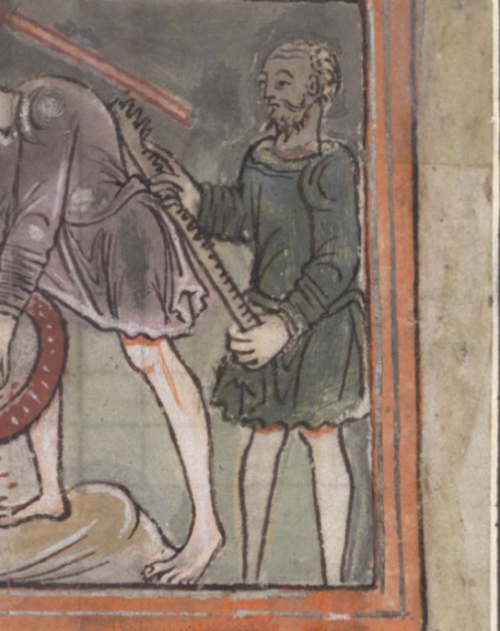 In the Julius Work Calendar, two men carry off an enormous basket, presumably filled with useable grain. In the Tiberius Work Calendar, the two men with a basket seem to be approaching the threshers, perhaps bringing the ears of grain to be threshed.

As with earlier tasks featured in this calendar, threshing might not have been the most seasonal activity for December. However, it might have been linked to December because threshing was a major Biblical metaphor. Since threshing is the process that separates useful, edible grain from inedible husks, it was used in both the Old and New Testaments as a metaphor for judgement, for separating the good from the bad. This metaphor might have been particularly appropriate for Advent, which starts in December. Advent is the period before Christmas in the Christian liturgical year. Today it is associated with chocolate calendars, but in Anglo-Saxon England it was a time of fasting and penance, like Lent, as people prepared themselves for the holy feasts.

There are a number of feasts highlighted with a gold cross in this calendar, all grouped towards the end of the month. The first of these falls on 21 December, the feast of St Thomas the Apostle which was also, the calendar notes, the Winter Solstice. Thomas was a popular saint in Anglo-Saxon England, and several Old English accounts were made of his life. Even the writer Ælfric was obliged to write an account of St Thomas’s life: he initially refused because other versions existed and because he and St Augustine had some doubts about some of the miracles attributed to Thomas. Their objection was not to the idea a miracle would happen, but because these stories portrayed Thomas as vengeful, taking delivery of a severed hand after its owner had slapped him.

The next major holiday marked in the calendar is one we still celebrate today: Christmas. Learn more about how Christmas was celebrated in 11th-century English monasteries here. Then as now, Christmas kicked off a whole series of festivities: the next three days in the calendar are also marked out in gold. On 26 December is the feast of St Stephen, the first Christian martyr. Rather luridly, the verse in the calendar describes him ‘swimming in blood’. This is followed by the feast of St John the Evangelist and then the feast of the Holy Innocents, the massacre of children in Bethlehem. At the top of the page, there is information about astrological changes in December, including a roundel depicting the constellation Sagittarius. Sagittarius is here depicted as a centaur, with his cape billowing out elegantly behind him. 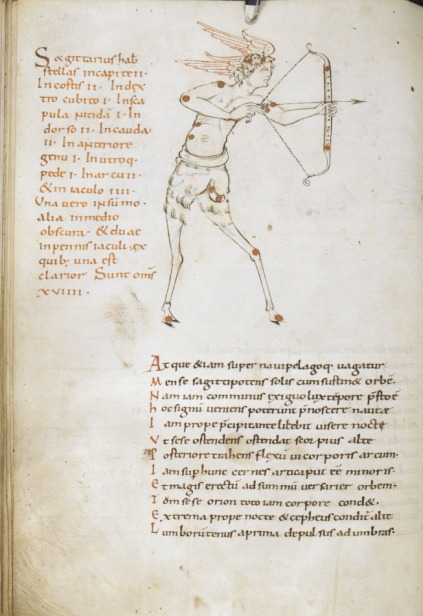 Detail of Sagittarius, from a copy of Cicero's Aratea in a collection of astronomical texts made in Fleury in the 990s, with drawings added a few years later by an English artist: Harley MS 2506, f. 39v

Whatever is on your own calendar for December, we hope you have a great month. And if you are looking for something to do over the winter holidays, the British Library has an interesting exhibition on at the moment …