The Histoire ancienne jusqu’à César (‘Ancient History until Caesar’) is a giant of a text. This universal chronicle, originally composed in medieval Flanders at the beginning of the 13th century, covers the ‘history’ of the world from the biblical Creation to Julius Caesar’s conquest of Gaul. There are over 90 manuscripts that contain the Histoire ancienne, including nine at the British Library, making it one of the most popular French texts of the Middle Ages. We do not know for certain the original author, but some have suggested it could be the prolific writer and translator Wauchier de Denain (fl. 1190–1210). 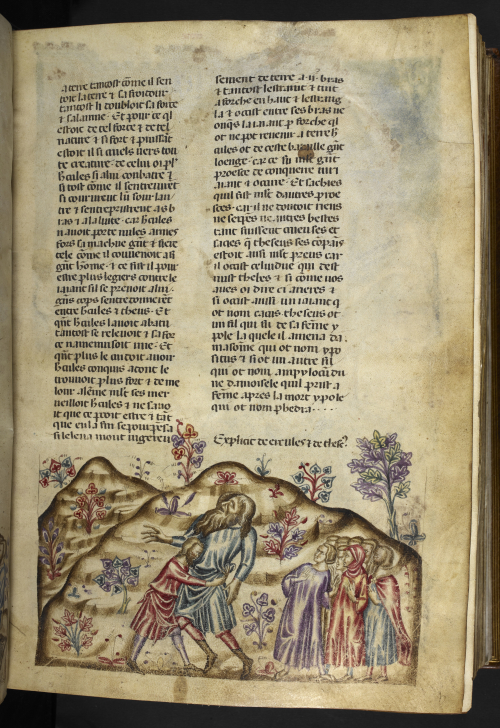 Two exquisite manuscripts of the Histoire ancienne jusqu’à César are now on display in the Library's Sir John Ritblat Treasures Gallery: a copy made in Acre (in the Latin kingdom of Jerusalem) in the late 13th century, now Additional MS 15268; and an Italian copy made in Naples in the 1330s, now Royal MS 20 D I. Both are full of fascinating and lavish illuminations, and are gigantic in scope and ambition, containing over 300 folios (or 600 pages). Both of these manuscripts are available to explore on the Library’s Digitised Manuscripts website, in addition to two other important copies of the Histoire ancienne, Additional MS 19669 and Stowe MS 54.

In the Gallery, you can see the episode where Hercules wrestles the fearsome Antaeus, a mythological giant who could only be defeated once lifted off the ground and strangled in mid-air. While modern observers might think of Hercules as a purely mythological figure, medieval writers and audiences treated him as a historical one. Hercules was viewed as an exemplar of military prowess and superhuman strength, as his marvellous victory over the giant shows. Along with Theseus, the mythical founder of Athens, he was, so the text claims, one of the ‘two best knights in the world’.

In the Naples manuscript, we see Hercules grappling with his opponent against a mountainous backdrop, while a crowd of excited onlookers watch fervently from the sidelines. The image in the Acre manuscript stages the scene in two parts. On the left, the two opponents engage in battle; on the right, the moment of Hercules’ victory is captured as he finally succeeds in strangling the giant. 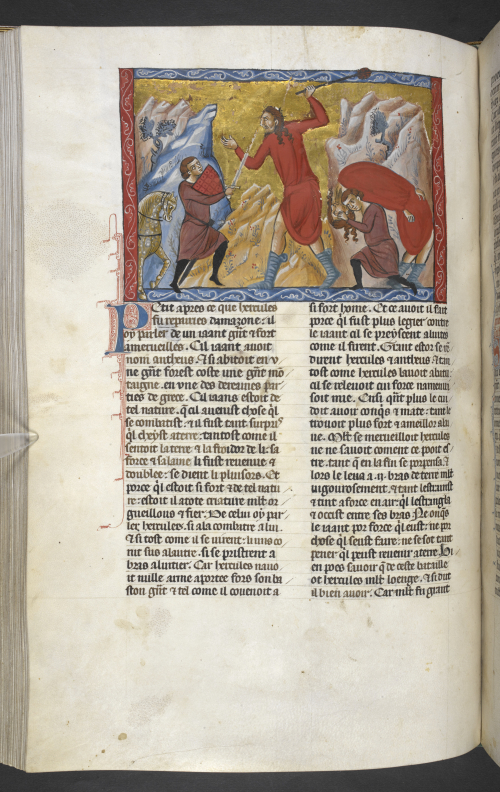 The duel of Hercules and Antaeus, and Hercules’ victory, last quarter of the 13th century: Additional MS 15268, f. 104v

Riotous battles and bloody duels account for a large proportion of the images in both manuscripts. The part that recounts the story of the Amazons, a legendary group of formidable warrior women who kill all their male offspring and let only their daughters survive, is often abundantly illustrated. These women come to the aid of the Trojans in the Trojan War, the ancient conflict between the Greeks and the inhabitants of Troy. In the Acre manuscript we see Penthesilea, Queen of the Amazons, who charges her female fighters into the Greek soldiers, but is later slain in a one-to-one encounter with Achilles’ son, Pyrrhus. Two other Amazon queens, Marpesia and Lampedo, are described in the text as ‘young women, with beautiful bodies and faces, and courageous hearts’. In the Naples manuscript we see them leading their troops whilst swinging their weapons in a visual cacophony of colour and movement. 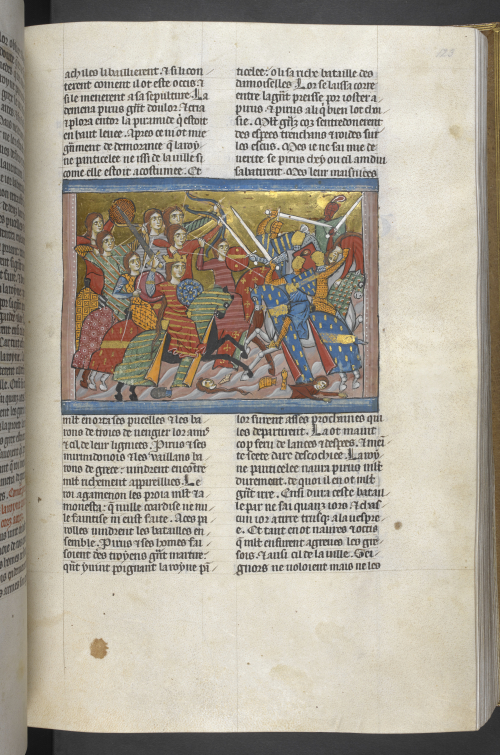 The battle between the Greeks and the Amazons (Queen Penthesilea wears the crown): Additional MS 15268, f. 123r 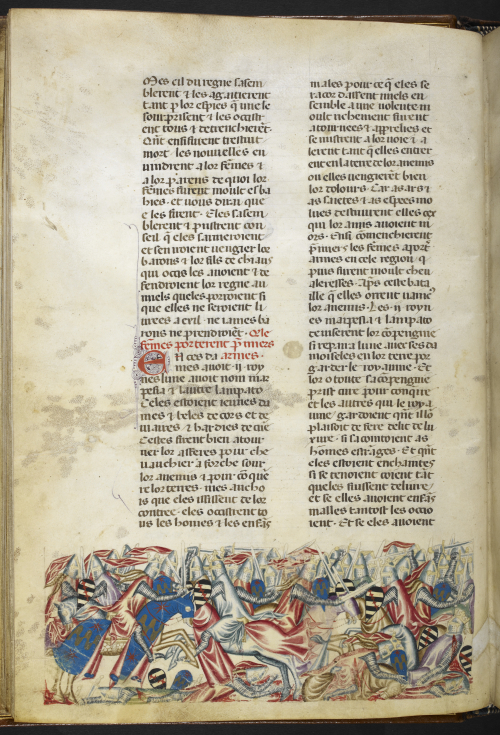 The army of Queens Marpesia and Lampedo in battle: Royal MS 20 D I, f. 23v

The visual appeal of these extraordinary illuminations may well be part of the reason why the Histoire ancienne became so popular the Mediterranean. Not only were copies made in Acre and Naples, but these two manuscripts themselves travelled widely. In an unexpected turn of events, the Naples manuscript probably was sent to Spain by Joanna of Anjou (1326–1382) as part of a ransom payment to secure the release of her third husband, James IV of Majorca (c. 1336–1375). By 1380, the manuscript had arrived in Paris, where its revised version of the text — the so-called ‘Second Redaction’ — would go on to be copied in at least eight different 15th-century manuscripts.

The Naples manuscript contains the earliest known copy of the Second Redaction, which is believed to have originated in this Angevin capital. The Second Redaction fundamentally changes the nature of the historical vision of the Histoire ancienne. In this version of the text, the section based on the Old Testament is omitted, and a much lengthier account of the Trojan war is included instead. This gives it a more secular focus: instead of having biblical figures and divine creation as the starting point for a history of humankind, the Second Redaction places the pagan heroes of the Greek and Roman worlds centre stage.

The fact that this major innovation of the Histoire ancienne jusqu'à César took place outside of what is now known as France should lead us to think more carefully about how texts crossed borders and shaped communities in the medieval world. While French was a language of administration, it was also a language of cultural prestige. There were people proficient in French across Europe — in the Holy Land, in Italy, in Spain and elsewhere — who looked back to a shared European past that was communicated through a shared ‘Frankish’ tongue, in a lingua franca. This literary giant may well be a French text, but it was also a distinctly European one. 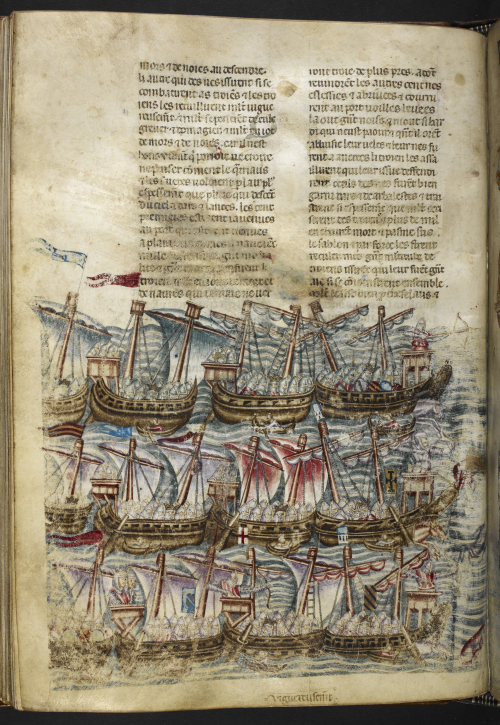 Both manuscripts are described in more detail on a new website created as part of the European Research Council–funded project, The Values of French Language and Literature in the European Middle Ages. This website also provides the first complete transcription of the Naples manuscript, Royal MS D 20 I.

As part of the project, there will be an international conference on 14–15 June 2019, exploring how history was told in different languages of the European Middle Ages. To find out more, click here. The keynote lecture, open to the public, will be given at the British Library by Robert Bartlett, Professor Emeritus at the University of St Andrews. More information will be available on the British Library Events page next spring.

For more information about these manuscripts and other copies of the Histoire ancienne, see our previous blogpost. There is a useful introduction to the text on the website of the research project Medieval Francophone Literary Culture Outside of France (2011–2015).

With thanks to Melek Karataş, Matt Lampitt and Henry Ravenhall (King's College London)