Have you ever wondered, if you lived in Anglo-Saxon England, how would you communicate with distant friends and colleagues? Before the days of email and WhatsApp, letters were written onto pieces of parchment, and could take weeks or even months to arrive at their destination.

A very small number of Anglo-Saxon letters survive in their original form. Letters were often practical documents, sent with a purpose or key message in mind. Many clerks saw little reason for preserving the originals unless they had important historical or theological content, or were sent by or addressed to an important person. Somewhat inevitably, Letters written on single sheets of parchment were more prone to wear and damage than manuscripts. Original Anglo-Saxon letters are exceedingly rare, and the majority of letters from this period are preserved in later copies.

In 12th-century Canterbury, a clerk sorting through a collection of Anglo-Saxon charters and letters wrote the words epistola inutilis ('useless letter') on the back of an Anglo-Saxon letter sent in the year 704 or 705. We would certainly not refer to this letter as ‘useless’ today, as it is now well-known as the earliest surviving letter written on parchment from the Latin West. The letter was written by Bishop Wealdhere of London and addressed to Archbishop Berhtwald of Canterbury. Wealdhere wrote to ask Berhtwald’s permission to attend a meeting of bishops that aimed to resolve recent disputes between the kingdom of the East Saxons and the neighbouring kingdom of the West Saxons.

The letter is in Insular minuscule script, which was quick to write and so perfect for letter writing. On the back, it is possible to see impressions left from when the letter was folded for delivery. Once folded, the scribe wrote the address inscription. Although faded, this inscription becomes a lot clearer with the assistance of multi-spectral imaging.

A possible transcription of the inscription is as follows: 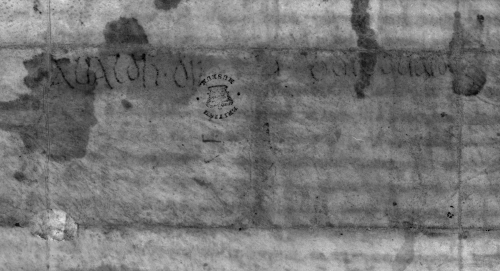 The address inscription on Weadhere’s letter before and after multispectral imaging: Cotton MS Augustus II 18

Another original Anglo-Saxon letter that was dubbed ‘useless’ in 12th-century Canterbury is the Fonthill Letter, now well-known for being the earliest surviving letter in the English language. In it ltter, Ordlaf, an ealdorman of Wiltshire, wrote to King Edward the Elder (899–924) to explain how he had acquired some disputed land in Fonthill, Wiltshire. This letter is also written in a minuscule script and retains impressions from where it was folded for delivery.

Many letters written by Alcuin of York (d. 804) survive in letter collections. Letter writing was a skill, influenced by convention and classical rhetoric, and students often consulted letter collections to learn their craft. One particular collection of Alcuin’s letters bears marginal notes made when the manuscript was used in the schoolroom.

Annotations in the margin of a letter collection of Alcuin’s letters: Harley MS 208, ff. 87v–88r

The manuscript was copied in 9th-century Francia, but was in an Anglo-Saxon England by around the year 1000. In the upper margin of one page, a student copied the alphabet (but inverted the letter 'b'), followed by 4 Old English letters and the first line of the Lord’s Prayer. In the bottom margin, the scribe wrote a line of Old English, Hwæt ic eall feala ealde sæge (‘Listen, I [have heard] many ancient tales’) which is reminiscent of a line from the epic poem Beowulf. Maybe the scribe felt that the collection of letters found in this manuscript were indeed ‘ancient tales’?

Alcuin spent the early years of his life at York, before moving to the Frankish court in the early 780s. He regularly wrote letters to Charlemagne, king of the Franks, and members of his court, discussing practical matters or engaging in theological discussion. Although Alcuin remained in Francia until his death in 804, he maintained regular contact with friends back in Anglo-Saxon England. When long distance travel was time-consuming and often dangerous, writing or receiving a letter must have been a special, emotive experience.

In his letters, Alcuin often acknowledged the joy of receiving a letter from a distant friend. In a letter to Higbald, bishop of Lindisfarne, he wrote:

“Let my speedy letter show in writing what my tongue cannot say in your ears, that the eyes may replace the ears in communicating the secret of the heart.” 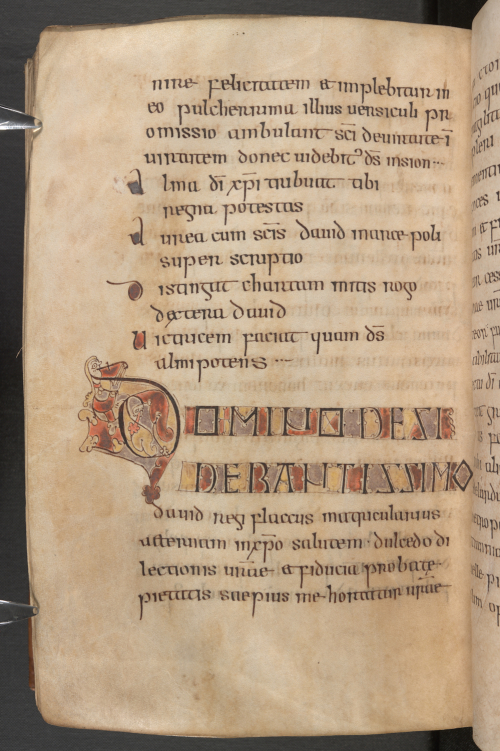 Although letter collections were often utilitarian manuscripts, some were clearly aimed at high-status audiences. The manuscript illustrated above was copied in 10th-century England, and it includes many of Alcuin’s letters to Charlemagne. The first two lines of every letter were copied in lavishly coloured display capitals, suggesting that the letter collection was compiled for a high status patron, perhaps a king given the focus of many of the letters.

You can see these original letters for yourself in our landmark exhibition, Anglo-Saxon Kingdoms: Art, Word, War, on at the British Library until 19 February 2019. Tickets are available here.