A whiskered beast of woods, I shred each boar,

Though armed with tusks, and antlered stags that roar;

And dread no terror by high royal right;

I sleep wide-eyed, with my jewelled beams closed tight.

This riddle was composed over 1,300 years ago by the Anglo-Saxon author Aldhelm. Big whiskers, ferocious, regal, never closes its eyes. Have you worked it out? It refers, of course, to the lion, the king of beasts. 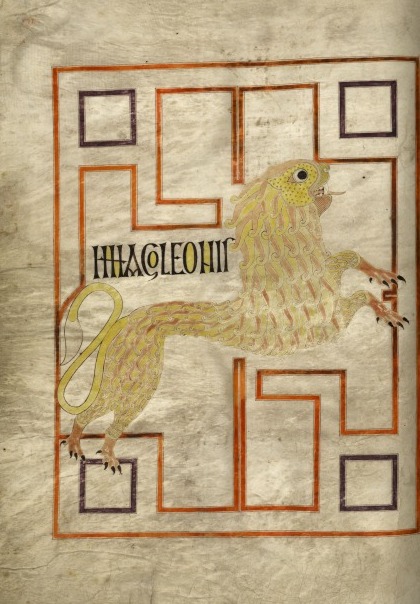 There are some fabulous 'Anglo-Saxon' lions currently on show in the British Library's once-in-a-generation Anglo-Saxon Kingdoms exhibition. It's been described (by Melanie McDonagh for the Evening Standard) as 'by some distance, the most significant exhibition in London'. The manuscripts featuring the lions are displayed alongside other artistic, historical and literary treasures, from Sutton Hoo and the Staffordshire Hoard to Beowulf and Domesday Book.

Where would you have expected to see a lion in Anglo-Saxon England? The answer, most likely, was in a gospelbook. A lion, a winged man, an eagle and a calf or ox were the symbols of the four writers of the gospels, Matthew, Mark, Luke and John, as described in Ezekiel 1.5–11 and Revelation 4.6–7:

The lion was associated with St Mark, whose gospel begins with a ‘voice crying out in the wilderness’ (Mark 1:3).

The image at the beginning of this blogpost is found in the spectacular Echternach Gospels. Helpfully, it is labelled ‘IMAGO LEONIS’. The lion itself leaps out of a maze of lines, which form an irregular cross. Its fur is drawn in a stylised, geometric manner and is coloured in yellow (representing gold) and a reddish-pink. It is impossible to tell precisely where this manuscript was made. Its 'Insular style' of decoration is typical of artwork produced around the year 700 in Ireland and England, as well as in monasteries in mainland Europe — such as at Echternach, now in Luxembourg — which were founded by Anglo-Saxon missionaries. 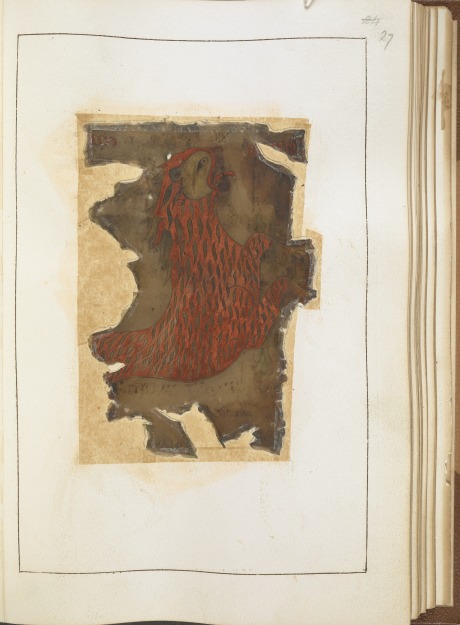 Another lion is found in an Anglo-Saxon manuscript known as the Otho-Corpus Gospels. Sometime during the 16th century, this gospelbook was divided into two parts: one half was acquired by Matthew Parker, archbishop of Canterbury (died 1575), who bequeathed it to Corpus Christi College, Cambridge; the other portion entered the collection of Sir Robert Cotton (died 1631) before eventually passing into the ownership of the British Library. (Cotton kept his manuscripts in book-presses named after the Roman emperors, including Julius, Nero and, in this instance, Otho.)

As in the Echternach Gospels, this lion is painted in red and yellow, and it appears to bound out of the page. But you will notice that it is no longer in pristine condition. In October 1731 it was badly damaged by fire when the Cotton library was being stored at the unfortunately-named Ashburnham House in London. The heat of the fire seems to have intensified the red and yellow pigments on the lion’s fur. 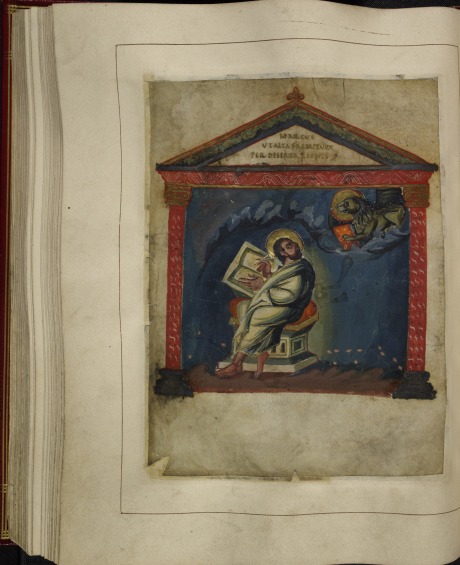 St Mark and his lion, from the Coronation Gospels: Cotton MS Tiberius A II, f. 74v

The third lion in our Anglo-Saxon Kingdoms exhibition looks rather different. It has a clear mane and golden fur, and it flies into the scene from the right, clutching a book with a decorated cover. This manuscript was made approximately 200 years after the other two examples, possibly in Lobbes (in what is now Belgium). It probably arrived in England as a present to Æthelstan, the first king of all England (924–939), from his brother-in-law, the future emperor Otto I.

All these Anglo-Saxon lions can be viewed in the flesh at the British Library until 19 February 2019. We hope that they capture your imagination in much the same way as they did their original owners and readers. And if you need an extra fill of cats, why not also come to the Library's amazing Cats on the Page exhibition (on until 17 March 2019)?

Were there actual lions in Anglo-Saxon England?