Discovered in a stable: the Anderson Pontifical

Considering that all Anglo-Saxon manuscripts are over a thousand years old, a remarkable number have survived until the present day. They have endured Viking invasions, wars and the Dissolution of the Monasteries. Some manuscripts have unlikely survival stories. We know, for example, that the Lichfield Gospels was hidden by a canon of Lichfield Cathedral during the English Civil War, while the Codex Aureus was ransomed by a noble family from a ‘heathen’ war band in the 9th century.

The Anderson Pontifical is another manuscript with an extraordinary survival story. It was discovered as recently as June 1970 in the stables at Brodie Castle in North-East Scotland.

It is not clear how the Anderson Pontifical ended up in Scotland. The script of the manuscript suggests that it was made around the year 1000 in southern England, possibly at Canterbury. The Anderson Pontifical includes some Old English words which are spelled in the Kentish rather than West Saxon dialect. For instance, storcellan (a censer) is spelled in this manuscript with an 'e', not 'y' as in West Saxon. 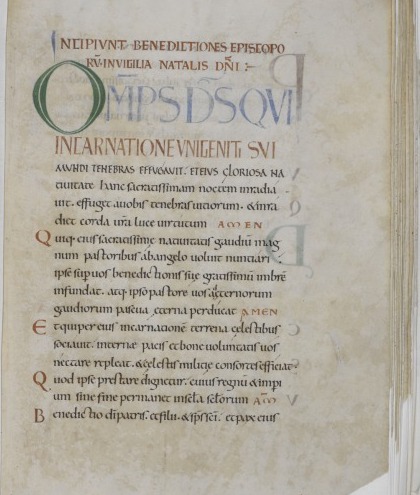 The beginning of texts for various exorcisms, consecration ceremonies and absolutions in the Anderson Pontifical: Add MS 57337 f. 103r

The Anderson Pontifical contains prayers and liturgical texts for a variety of services, including for the coronation of an Anglo-Saxon king. While it is impossible to tell whether this book was actually used at a late 10th- or early 11th-century coronation ceremony, it is certainly a finely-produced volume, with decorated initials and different sections of text written in different colours. 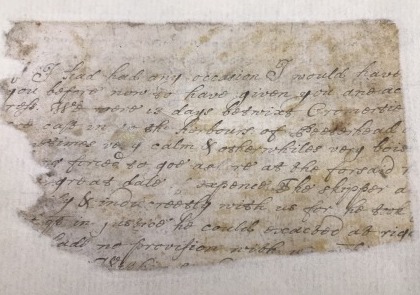 Despite its possible connection to kings and bishops, the later history of this manuscript is obscure. Some clues are perhaps found in its limp vellum binding and fragments of early modern papers that were found with the manuscript in 1970. A note on part of these wrapping papers in a 14th-century hand reads, 'benedictionale [et] po[n]tificale; s[an]c[tu]m Barth[olomaeum]’. Among these wrapping papers were fragments of early modern printed books and a letter which mentions the harbour at 'Peeterhead'. This suggests that the manuscript was at Peterhead in Aberdeenshire, Scotland, by the 16th century. 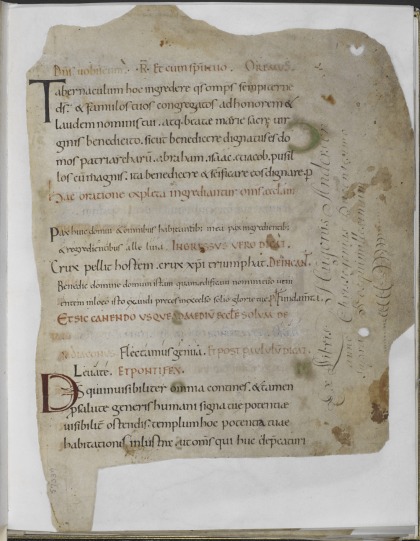 By 1700, the manuscript was owned by Rev. Hugh Anderson (d. 1749), minister of the parish of Drainie, near Elgin, Morayshire. We know this because he helpfully inscribed 'Ex libriis Hugonis Anderson, anno Christogonias ducentesimo supra sesquimillesimum'  on the opening folio. Anderson evidently prized the pontifical and was very particular about who would own it next. In a note dated 5 May 1741, he bequeathed it to one William Mercer and his son Hugh Mercer (Add MS 57337/1, f. 13v). However, he later crossed out that note; on 6 October 1741 the manuscript was left instead to the local laird, Sir Robert Gordon of Gordonstoun (1696–1772), 4th baronet. What happened next is uncertain, until the Pontifical's fateful rediscovery in 1970. 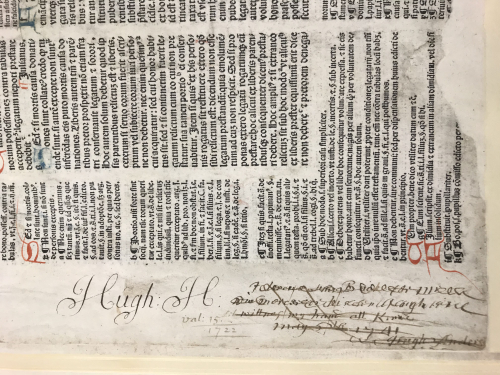 Note explaining that the Pontifical was to be bequeathed to Willliam Mercer and his son Hugh Mercer: Add MS 57337/1, f. 13v 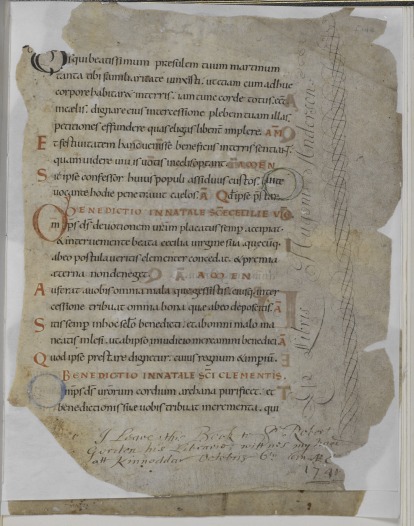 Given its eventful history, the Anderson Pontifical is in remarkable condition. Its coloured text is, for the most part, bright and legible. Until 19 February 2019, you can see for yourself as the manuscript is on display at the British Library’s Anglo-Saxon Kingdoms exhibition. Tickets are available here.