From the Tower the day before my death

On 21 January 1552, Edward Seymour, 1st duke of Somerset, took some time from his prison cell in the Tower of London to compose his thoughts in a small almanac (British Library, Stowe MS 1066). Bound in crimson velvet, the book contained a calendar and tables for finding movable feasts (religious feast days which do not occur on the same date each year), the duration of moonshine and sunshine, and the ebb and flow of the tides. 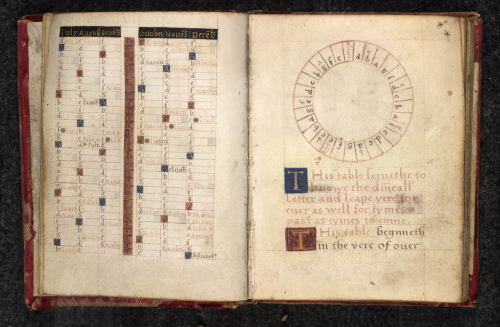 The almanac was a useful thing to have to hand but, on this occasion, it was its small size (measuring just 3.75 by 3 inches) that made it particularly valuable. It could be easily concealed.

In it, Somerset wrote the following words on the fly-leaf:

the day before my deth 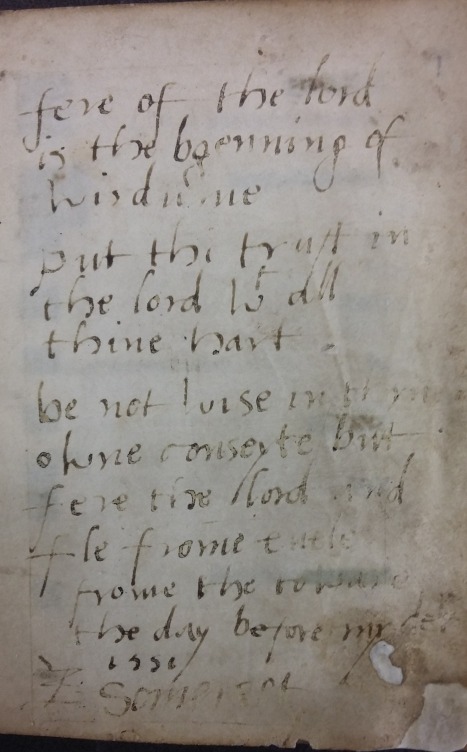 Somerset's inscription on the first page of the almanac.

At the end of the book, on the inside cover, is written in a minute italic hand, ‘Katerine Hartford Caterine Seamoar’. 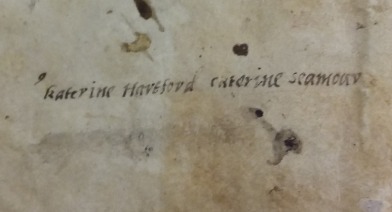 The note found at the end of the book

Somerset was the eldest brother of Jane Seymour, the third wife of King Henry VIII (1509–1547) and mother of Edward VI (1547–1553). Edward was only nine when he succeeded his father as king in January 1547, and authority passed to a privy council headed by his uncle Somerset as lord protector of England and Ireland and governor of his person. But Somerset fell from power in the aftermath of the 1549 rebellions: some of his colleagues blamed him for entering into open communication with the rebel leaders about political and social reform in the upcoming parliament. He was released from the Tower in February 1550 and restored to the privy council in the spring but not to his former offices as lord protector and governor. 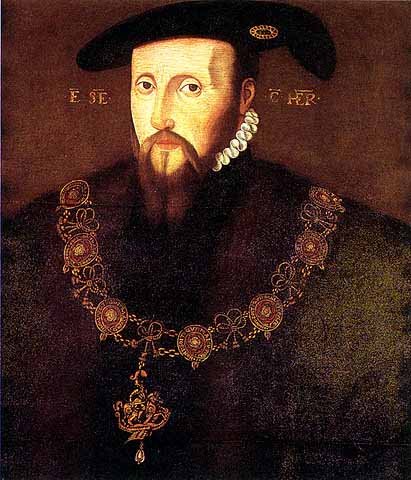 A portrait of Edward Seymour, 1st duke of Somerset, by an unknown artist, from the collection of the Marquess of Bath, Longleat House, Wiltshire

Somerset was rearrested at court on 16 October 1551, after attending a meeting of the privy council and dining with his nephew. Two days previously, he had ‘sent for the secretary [Sir William] Cicel to tell him he suspected some ill’, but made no effort to escape (Cotton MS Nero C X, f. 44v). A number of his servants and clients were taken at the same time, who were all charged with him of conspiring ‘against the state of the realme and gouuernaunce of the King[e]s Ma[ies]te … and to the destruction of diuerse of the nobilite’ (The National Archives, SP 10/13/57, M. f. 113r). He was tried at Westminster Hall on 1 December on trumped up charges of treason and felony, accused of gathering his supporters together to ‘compass and imagine’ seizing the king ‘at [his] will … to rule and treat’, plotting to make himself lord protector again, and inciting the citizens of London into rebellion ‘with cries and exclamations, … shout[ing] … “liberty, liberty”’ (TNA, KB 8/19, mm. 24, 27).

Surprisingly, Somerset was acquitted of treason but found guilty of felony (for unlawful assembly), and condemned to death. The real reason for his fall was his estrangement from the man who replaced him as head of Edward VI’s government, John Dudley, duke of Northumberland, and fear over his popularity with the common people. Where once they were allies and close friends, Northumberland had played a key role in deposing Somerset in October 1549, and they had argued bitterly and openly at privy council meetings over religious and state policy ever since the latter’s restoration in spring 1550. Northumberland, a careful and a ruthless man, had decided that it was time to destroy the former lord protector.

On 18 January 1552, the government took the decision to execute Somerset (featured in a previous blogpost) the day before parliament was recalled. On being informed of his fate, the duke composed his mind in the small almanac he had concealed on his person during his arrest. He turned for comfort and instruction, ‘the day before my deth’, to three verses from Miles Coverdale’s 1535 translation of the Bible (Proverbs 9:10; Proverbs 3:5; Proverbs 3:7). These verses warned against the danger of pride and commanded obedience to and faith in God. In writing them, Somerset demonstrated his piety in the face of death. 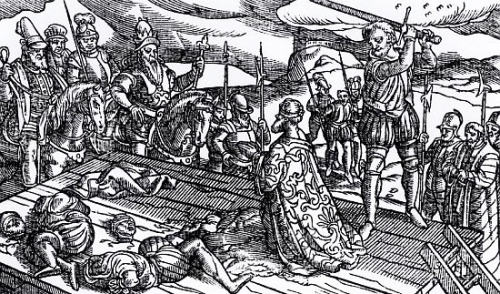 An engraving showing the execution of Edward Seymour

Despite a government curfew, a huge crowd gathered on Tower Hill the next morning, 22 January, to witness his execution. He addressed them ‘w[i]t[h] … alacrity, & cherefulnesse of minde & countenance’, saying he had always served the crown loyally but ‘am by a law condemned to die’, while rejoicing in the part he had played in the reformation of religion (John Foxe, Actes and Monuments (London, 1563), sigs. 3K2v–3K3v). Lastly, he implored them to obey the king and privy council and asked forgiveness from any person he had ever wronged, offering forgiveness in turn, before laying his neck on the block and praying three times. His head was struck off midway through uttering ‘Iesus’. The almanac is incredibly small, and can easily be held in the palm of the hand

This almanac, Stowe MS 1066, somehow found its way after Somerset’s death to his son, Edward Seymour, first earl of Hertford. He too ended up in the Tower, for his clandestine marriage late in 1560 to Elizabeth I’s cousin and heir presumptive, Lady Katherine Grey. At some point Katherine, who was Lady Jane Grey’s younger sister, inscribed the back inside cover of the almanac, ‘Katerine Hartford Caterine Seamoar’. She gave birth to two sons in the Tower, one of them conceived during illicit conjugal visits. Queen Elizabeth was furious and kept her prisoner for the rest of her life. Katherine died, perhaps as a result of anorexia, in January 1568.