Some readers of this Blog may remember a sword with a mysterious inscription that was displayed in the British Library’s Magna Carta exhibition in 2015. Thousands of people across the world tried to solve that particular puzzle, so we thought we'd test your brains again with another undeciphered inscription.

This time round, it's found in our Anglo-Saxon Kingdoms exhibition, on display in London until 19 February 2019. On show alongside some of the greatest manuscripts from Anglo-Saxon times, and treasures from Sutton Hoo and the Staffordshire Hoard, is this silver-gilt fitting, kindly loaned by the British Museum. It's dramatically decorated with a beast’s head: blue-glass eyes, scrolled ears, fangs and a looped tongue define its features.

A silver gilt fitting with a runic inscription: British Museum BEP 1869,0610.1 © The Trustees of the British Museum. All rights reserved.

The ‘body’ attached to the head is decorated with a line of runes. Transliterated into the Latin alphabet, they read as follows:

But what does this mean? To date, no one has been able to translate this runic inscription into modern English. Maybe you can try?

The fitting probably dates to the late 8th century. It resembles artwork made in Mercia around that time: compare, for example, its beast head with some manuscripts from that period. The fitting’s function is uncertain, but since it is only decorated on one side, it might have been part of a scabbard for a long knife or seax. It was found in the River Thames near Westminster Bridge in the 19th century. 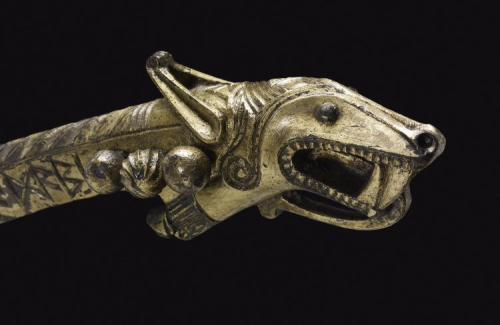 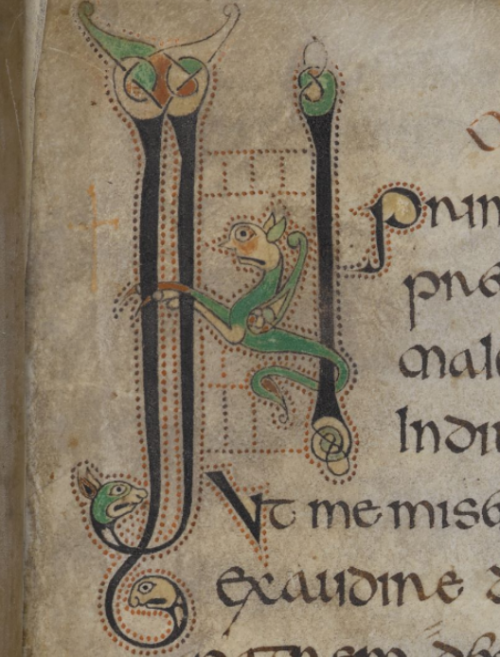 Compare and contrast: (1) the beast's head from the silver gilt fitting: British Museum BEP 1869,0610.1 © The Trustees of the British Museum. All rights reserved. (2) detail of an initial with a beast’s head, from a manuscript made in Mercia in the late 8th or early 9th century: Royal MS 2 A XX, f. 17r

Some people have suggested that cryptic collections such as this may have acted as talismans, offering protection to the owner. You may be aware that the word ‘rún’ (rune) is related to the Germanic words for ‘secret’ and ‘whisper’.

So what do these mysterious runes mean? We'd love you to send us your thoughts, either by tweeting @BLMedieval or by using the comments button below.

Has anyone suggested that these are the first letters of words, representing a longer inscription? Like SPQR or IHS? It might be worth trying to match it up to known Mercian texts that might have been used in such a context.