What do the St Augustine Gospels, the Eadwine Psalter and the Moore Bede have in common? They have all been kindly loaned to our Anglo-Saxon Kingdoms exhibition by institutions in Cambridge. On display in the exhibition are a host of manuscripts from Corpus Christi College, Trinity College and the University Library. Read on to find out more about some of these fantastic loans. 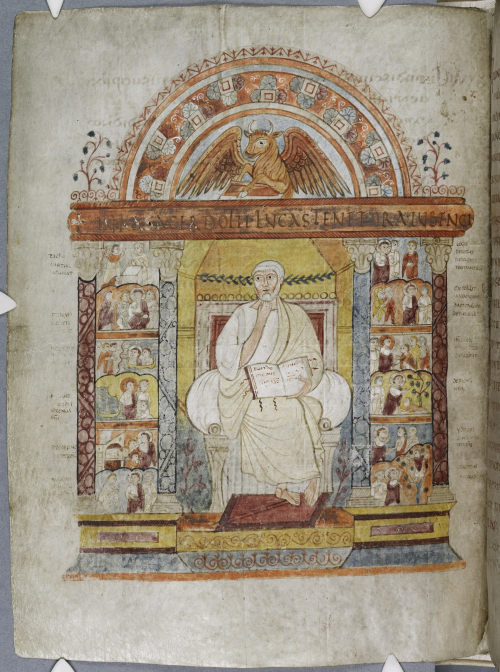 The St Augustine Gospels is one of the great treasures on loan from Corpus Christi College. This gospel-book dates from the late-6th to the early-7th century and is thought to have been made in Italy, possibly at Rome. This manuscript likely came to England soon after its creation, perhaps with the mission of Augustine of Canterbury. The St Augustine Gospels is still used today at every inauguration of a new archbishop of Canterbury, travelling from Cambridge for the occasion. This splendid manuscript provides a tangible link to the very early days of the Anglo-Saxon Church. 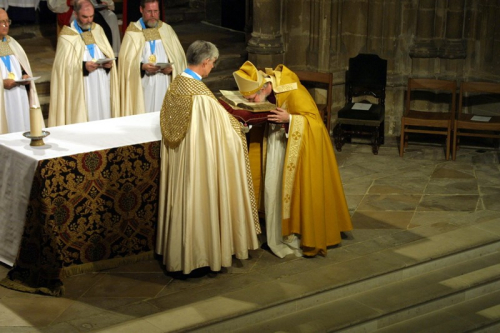 The Dean of Canterbury holds the “Canterbury Gospels”, as Archbishop Rowan Williams kisses the ancient book (by permission of James Rosenthal/Anglican World) 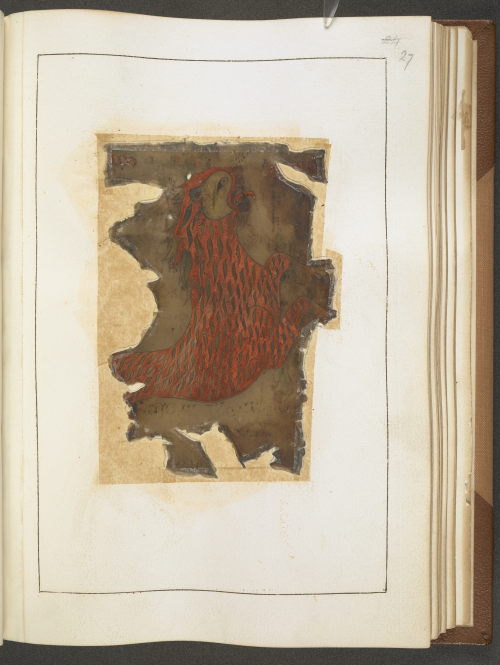 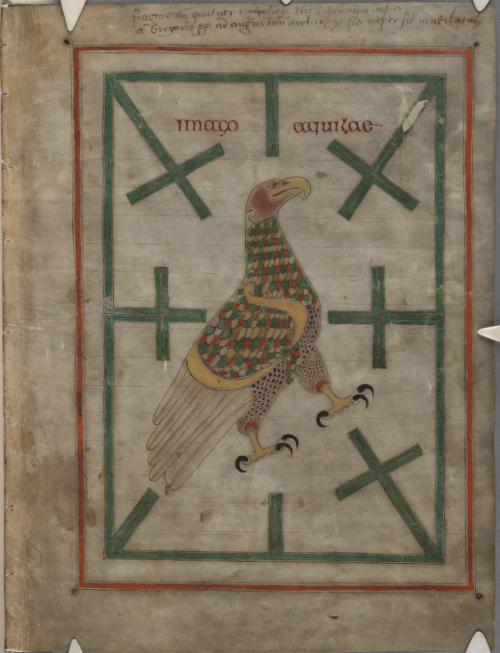 In the Anglo-Saxon Kingdoms exhibition are displayed two portions of the Otho-Corpus Gospels. One fragment is from the British Library’s own collections, and was badly damaged in the Cotton Library fire in 1731; the other part has been loaned by Corpus Christi College. This is a rare opportunity to view these two portions together and to compare the illustrations of John’s eagle and Mark’s lion. 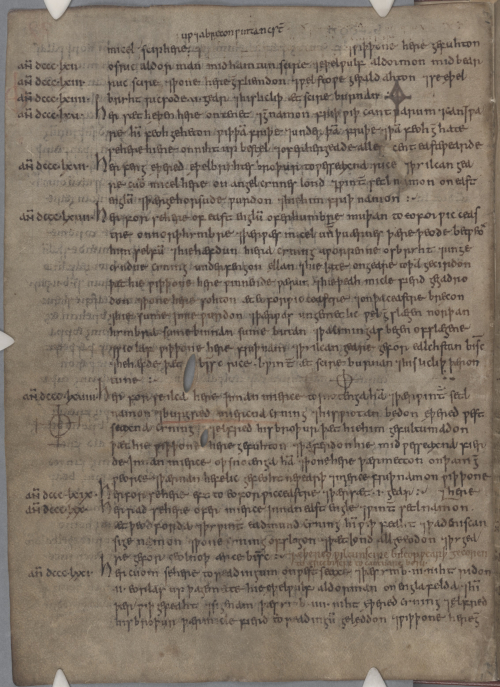 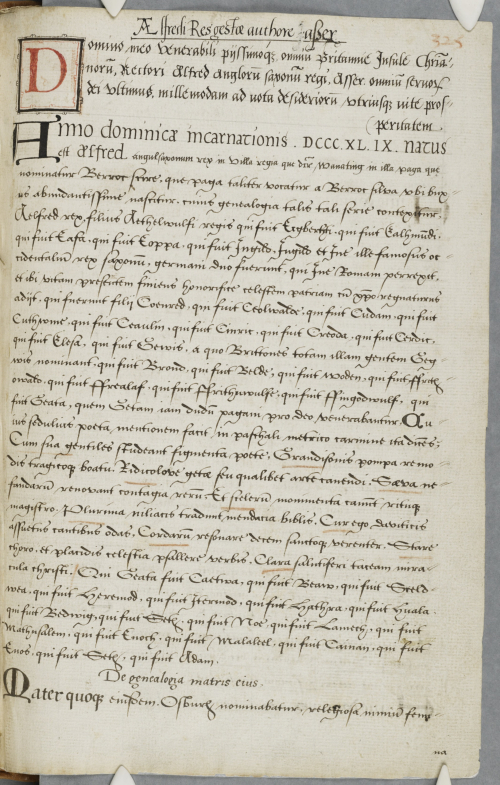 Corpus Christi has also loaned a 16th-century transcript of Asser’s Life of King Alfred. This is a biography of the 9th-century King Alfred the Great of Wessex, written during the king’s lifetime by the Welsh monk Asser. The only medieval manuscript of the ‘Life of King Alfred’ that survived into modern times was destroyed in the Cotton Library fire in October 1731. Although Alfred is commonly remembered as the Anglo-Saxon king who defeated the Vikings, Asser’s work barely mentions this, instead giving a more personal account of Alfred’s life. 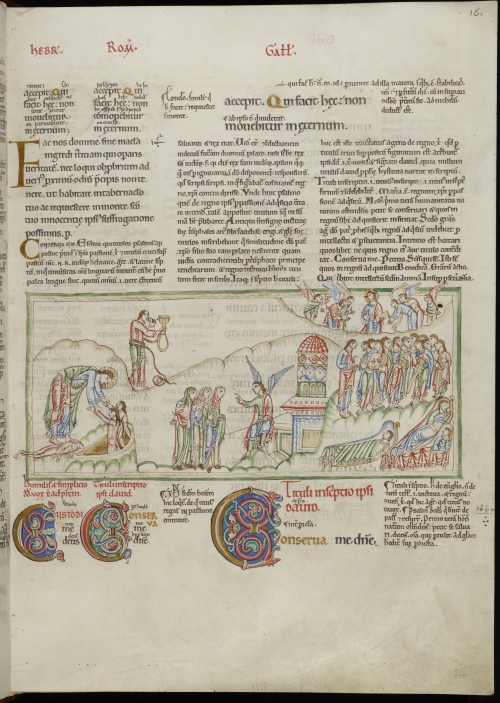 The Anglo-Saxon Kingdoms exhibition also features a selection of manuscripts on loan from Trinity College, Cambridge. Among them is the Eadwine Psalter, a mid-12th century manuscript made in England. This Psalter is the second copy made of the 9th-century Utrecht Psalter, which was revolutionary for its inclusion of drawings outside the confines of decorative initials and borders. The Eadwine Psalter is extraordinary because of its elaborate illustrations, and also its inclusion of all three of Jerome’s translations of the Psalms, an Anglo-Norman French translation and a translation into Old English. 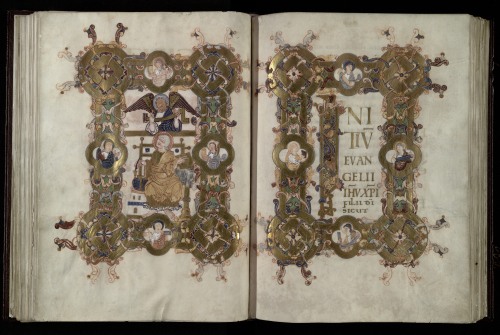 The Trinity Gospels, also on loan from Trinity College, is one of the most elaborately decorated of all surviving 11th-century gospel-books. This manuscript is notable for containing all four of the full-page decorated ‘incipit’ pages at the beginning of the gospels. They are decorated with gold and painted haloed figures holding books and scrolls. 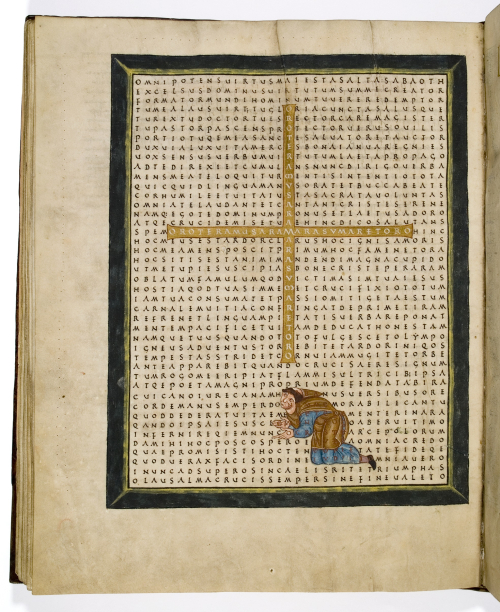 A copy of Hrabanus Maurus’s fascinating text, ‘In Praise of the Holy Cross’, is also on loan to the exhibition from Trinity College. This is one of only two copies of this text to be made in Anglo-Saxon England. Hrabanus Maurus was a renowned Carolingian scholar whose works were popular throughout medieval Europe. This particular work contains poems where both word and metre are embedded into a grid, with concealed phrases revealed only by superimposed images and shapes, in this instance a cross. 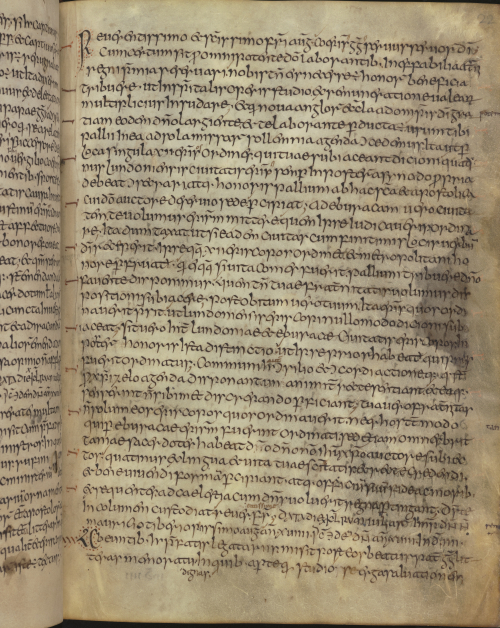 One of the manuscripts on loan from Cambridge University Library is known as the ‘Moore Bede’. This is perhaps the earliest surviving copy of Bede’s Ecclesiastical History of the English People, completed in 731. This well-known text is the first narrative historical account of the origins of the English. The manuscript is copied in Insular minuscule, which was faster to write than the more elaborate uncial script, allowing scribes to meet the exceptional demand for Bede’s work. 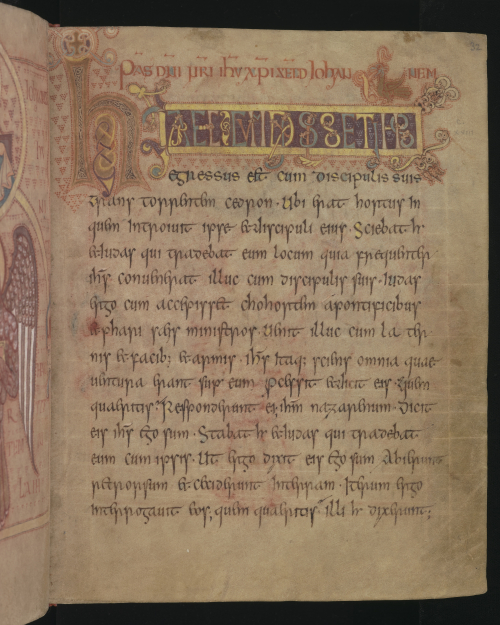 Finally, Cambridge University Library has loaned us The Book of Cerne, a beautifully decorated 9th-century prayer-book. It contains extracts from the four Gospels, 74 prayers, a selection of Psalms and the earliest surviving liturgical drama in England, the Harrowing of Hell. The illustrations in this manuscript are very sophisticated, with each gospel proceeded by a portrait of the evangelist and his symbol.

We are incredibly grateful to our Cambridge friends for lending these manuscripts to Anglo-Saxon Kingdoms. The exhibition runs until Tuesday, 19 February. Tickets are available here. Hurry… they’re selling fast!