According to conventional estimates, the British Library holds some 3,136 glazed Greek and Latin papyri. This may well convey the exact number, but the actual figure is potentially much more, given that certain glass frames may contain several unrelated papyrus fragments (for example, Papyrus 113(9)).

The Library's papyri cover all phases of the ‘Greek millennium’ of Egypt’s history and many areas of the country. They were digitised in 2016–2017, thanks to the joint efforts of staff from Western Heritage Collections, the Library's Conservation Centre and and our Imaging Studios, producing images of extremely high resolution. The project itself might be compared to one of the labours of Heracles, given the number of papyri and the size of some of them. This first stage was presented at the ‘Third Papyrus Curatorial and Conservation Meeting’ held at Cambridge University Library in 2017.

Following digitisation, the papyri are now being catalogued: this phase started exactly one year ago and since then the Library's online catalogue has already been enriched with some 300 records. The high resolution images have been added to our Digitised Manuscripts site, while some of the papyri have been published in a new viewer, as the example below shows. 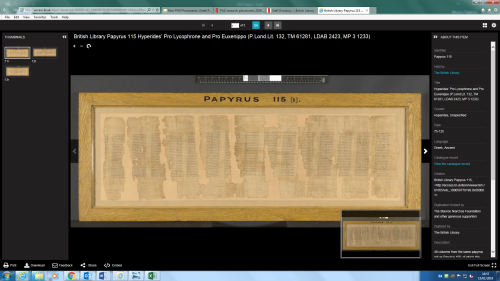 Many important papyri held at the Library are now available online. They include literary texts such as Pindar’s Paeans (Papyrus 1842); the Hellenica Oxyrhynchia (Papyrus 1843); and Bacchylides’ Epinician Odes and Dithyrambs (Papyrus 733), as well as interesting documents that shed light on administration and everyday life in Egypt during the Ptolemaic, Roman and Byzantine periods. 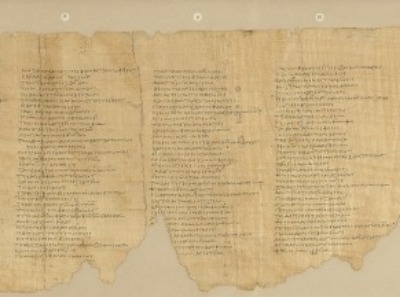 The first results of this cataloguing project were presented at the ‘Fourth Papyrus Curatorial and Conservation Meeting’, which took place at the British Library in June 2018. If you want to read more about this gathering of scholars and specialists from all over the world, read our blogpost Reunion and reunification.

Collaborations with other institutions have contributed to enriching the British Library's online catalogue. Attendees of the ‘2018 Heidelberg Research Webinar on BL Greek Papyri’ have studied and produced metadata for a number of published and unpublished texts, now available on Digitised Manuscripts. The PLATINUM project (Papyri and LAtin Texts: INsights and Updated Methodologies) has also contributed to the cataloguing of our Latin papyri, recently discovering a unique piece written in Arabic but with Roman characters (Papyrus 3124). 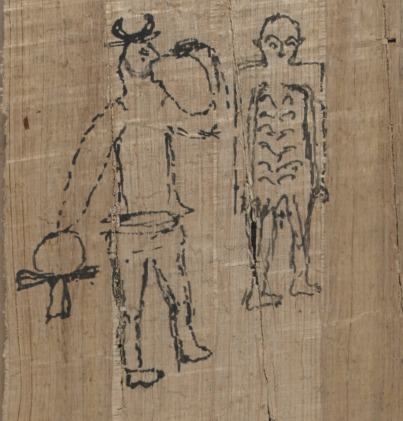 A drawing in Papyrus 123, catalogued by the participants of the Heidelberg Webinar

These achievements combine with exciting projects in the near future. A new training and development opportunity as part of the British Library's PhD research placement scheme has arisen for doctoral students focusing on Greek papyri. The student will join a lively team for three months (or part-time equivalent), gaining first-hand experience in working with the Library's papyri. They will contribute towards the cataloguing associated with this project, enabling the digitised images to be described and published on the Library’s online catalogue and viewer. The placement student will also contribute to blogposts, and will support other Library activities to promote the collection and its international importance.

The deadline for applications is Monday, 18 February 2019. Full details on how to apply and the placement profile are available here.