One of our favourite online resources is the Catalogue of Illuminated Manuscripts. It has recently been updated to include fifteen new manuscripts and lots more images.

You can already view the enormous 11th-century Stavelot Bible on our Digitised Manuscripts website (Add MS 28106 and Add MS 28107). Two more manuscripts from the Benedictine abbey of Stavelot, in the diocese of Liège, have now been added to the Catalogue of Illuminated Manuscripts.

This 13th-century missal is bound in two volumes (Add MS 18031 and Add MS 18032). The litany of saints includes St Remaclus, patron of the abbey, and a notice of the dedication of the monastery ('Dedicatio Stabulensis ecclesie') on the calendar page for June. The manuscript's 14th- or 15th-century additions include a mass for St Poppo of Stavelot and the feast of Thomas Becket, inserted in  the calendar (f. 13v). 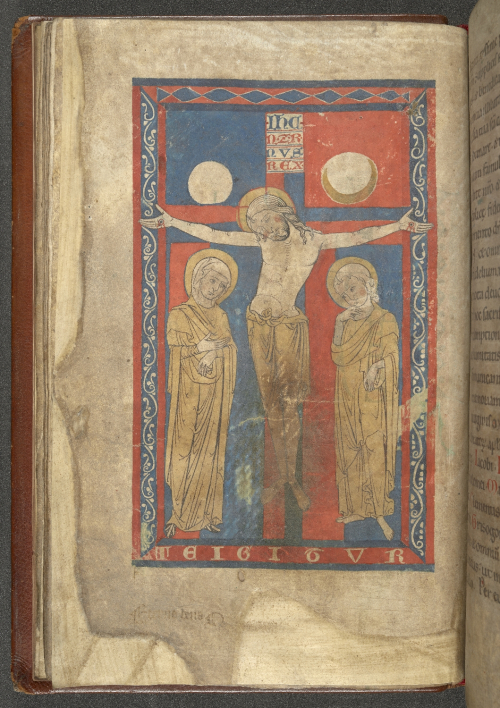 The Crucifixion with Mary and John, from the ‘Stavelot Missal’, volume I: Add MS 18031, f. 18v. The whole manuscript can be viewed online here, together with the second volume.

A Psalter from Stavelot

This early Psalter with a Latin commentary is one of a group of manuscripts produced at Stavelot around the year 1000 and illuminated in the distinct Mosan style. 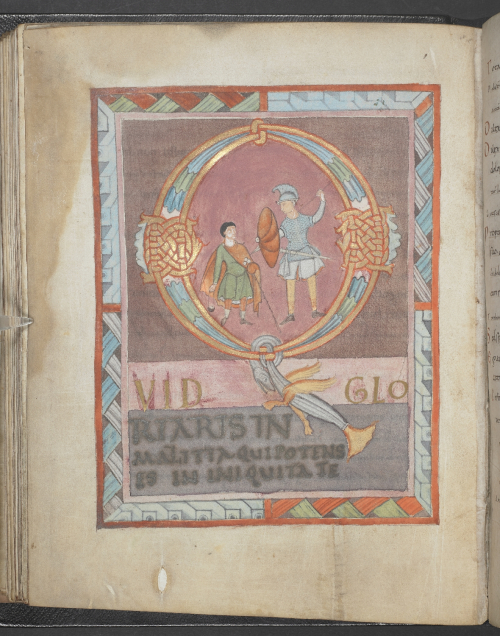 David and Goliath in the Stavelot Psalter: Add MS 18043, f. 64v. The whole manuscript can be viewed online here.

The Gospels from Tours

Tours was an important centre of Carolingian manuscript production in the 9th century. The style of decoration of this gospel-book is Franco-Saxon, combining elements of Frankish and Anglo-Saxon decoration, including a distinctive combination of orange-red and gold. This framed incipit page includes display capitals in gold on purple grounds. 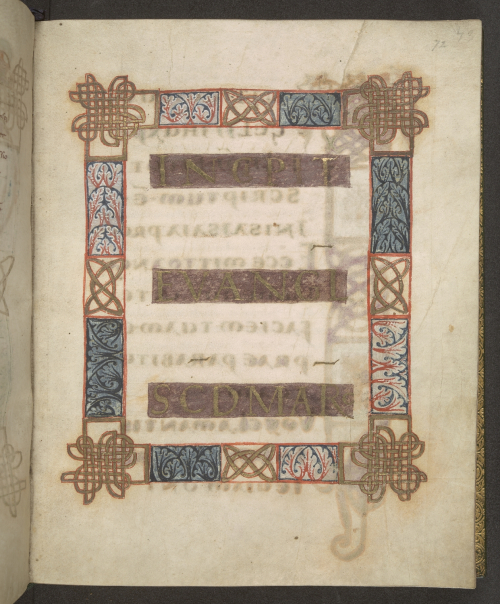 Incipit page of the Gospel of Mark: Add MS 11849, f. 72r. The whole manuscript can be viewed online here.

This manuscript of Isidore of Seville’s Etymologies was made at Neuvelle-lès-la-Charité in eastern France in the 4th quarter of the 12th century. The decorated page below contains a consanguinity diagram, showing which family members were deemed to be too closely-related to marry by the medieval Church. The entwined foliage with the tendrils held by human figures represents the blood ties between family members, and there are strange hybrid creatures at the three points of the triangle. 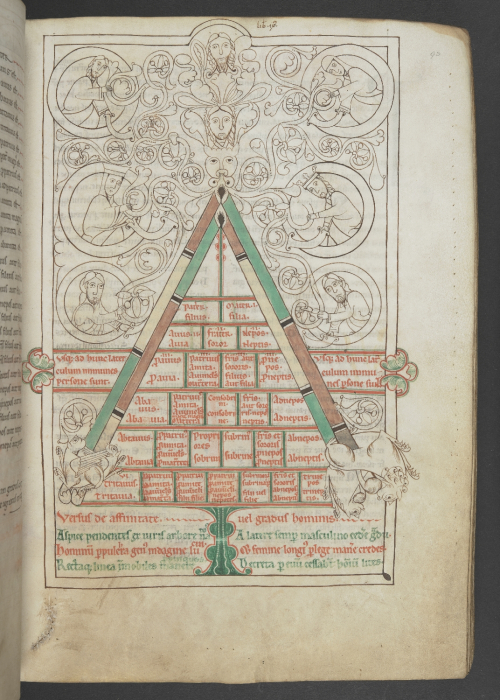 This 12th-century manuscript, made in the southern Netherlands or northern France, contains Marcus Tullius Cicero’s De inventione, a handbook on how to be a good public speaker. It is followed by the Rhetorica ad Herennium, the most popular work on rhetoric throughout the Middle Ages and the Renaissance. These two texts were often copied together and were used to teach rhetoric in a structured and disciplined way. 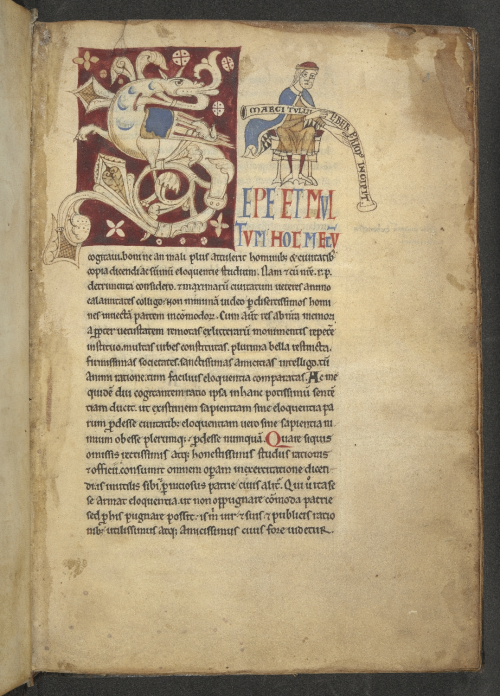 This collection of royal, papal and episcopal charters contains a number of letters written by Anglo-Saxon kings (Edgar, Æthelred and Cnut). The volume also contains a series of liturgical texts including accounts of the Passion of Christ, with portraits of St Mark and St John. 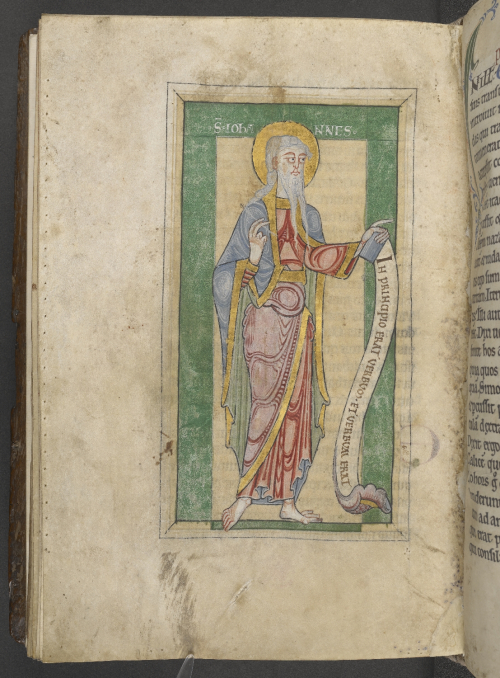 St John the Evangelist, from the Sherborne Cartulary: Add MS 46487, f. 52v. The whole manuscript can be viewed online here.

These two Psalters, both produced in the latter part of the 12th century, have a similar layout. The text of the Psalms in the central column is surrounded by a gloss or commentary, and there are large decorated initials marking the beginning of the major Psalms. However, the style of illumination points to different areas of origin: the first in England or northern France, and the second in southern Germany or eastern France.

An English or French Psalter

This elegant Psalter was made in the 2nd or 3rd quarter of the 12th century. It begins with a large, illuminated initial that includes pictures of David and of Christ preaching to a group of men. 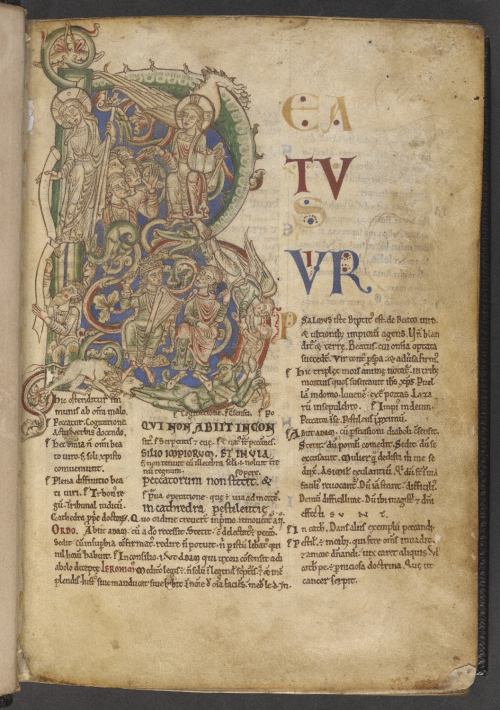 The gloss in this 12th-century Psalter is attributed to the circle of Anselm of Laon (d. 1117). Added on the last leaf, in contemporary script, is a tract on curing haemorrhoids (f. 196r). 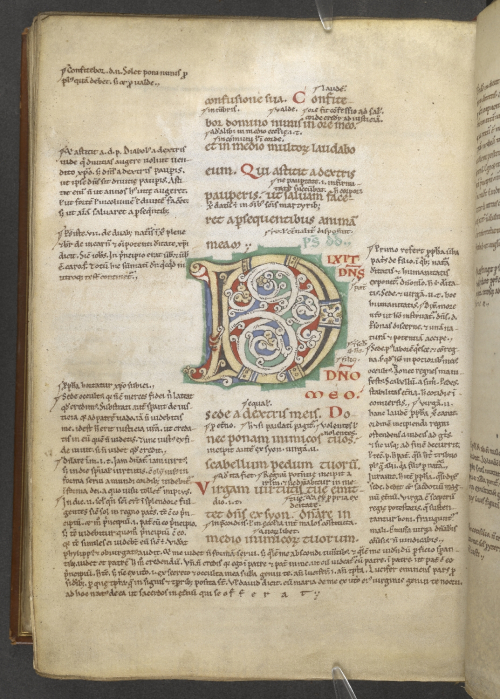 A Psalter of the Use of York

This late 12th- or early 13th-century Psalter was possibly made for the Augustinian abbey of Bourne in the diocese of Lincoln, since additions in the calendar include Abbot Henry of Bourne and Hugh of Lincoln. It seems to have been owned later by a Cistercian monastery, because 15th-century additions to the calendar include the feast of St Bernard of Clairvaux and other saints venerated by that Order. It has large gold and coloured initials at the beginning of major Psalms, many of them with animal heads and bodies entwined in the foliage. 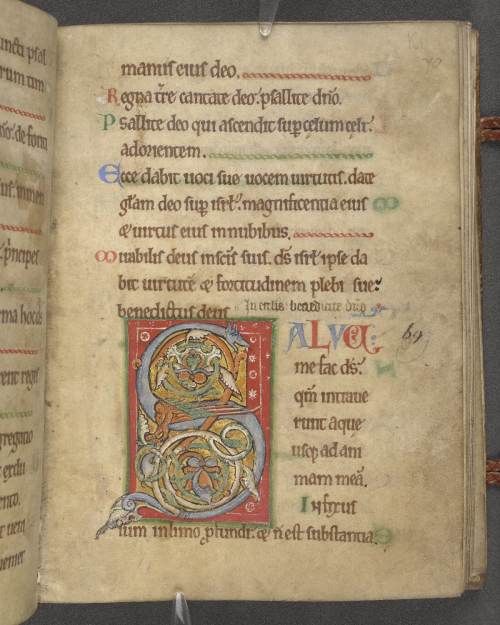 The 13th-century Percy Psalter is thought to originate from York. It has beautiful illuminated initials, while the borders contain mythical beasts and graphic hunting scenes. Unicorns were believed to be symbols of purity and grace, which only a virgin could capture; in order to hunt one successfully, it first had to be tamed by a young girl before being killed, as shown here. At the top of this page is the pelican biting its breast to revive its young. The initial depicts David pointing to his mouth, showing that he will avoid 'sinning with the tongue' (Psalm 38). 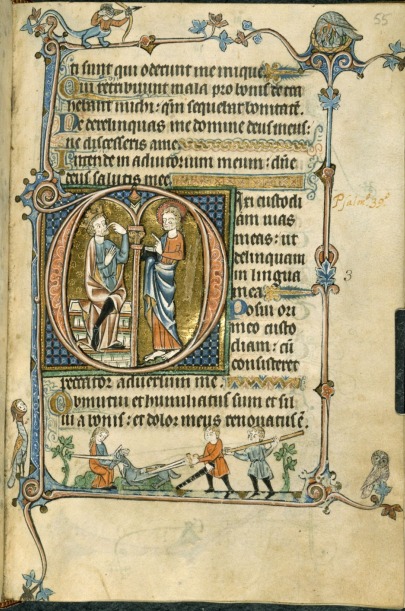 Old Testament from Genesis to Ruth

This is the first volume of another large Bible (in five volumes), produced in the Meuse valley around 1430. It belonged to the Benedictine abbey of St James, Liège, whose coat of arms and motto (‘CONSTANTER AD ASTRA’) is pasted on the spine. The opening page for Genesis has roundels of the seven days of Creation, marginal figures of angels with scrolls containing quotes from Augustine, and paired pagan and Christian philosophers These include Augustine with his attribute of a heart, Albertus Magnus in discussion with Averroes, and Old Testament figures including Melchisedek. 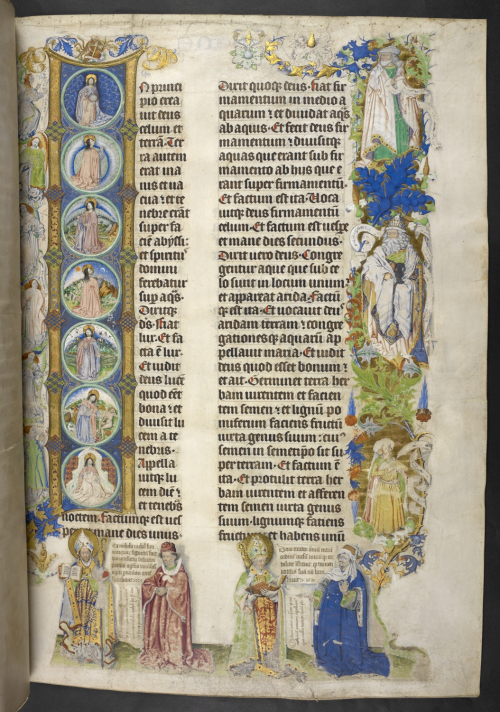 This miscellany of religious tracts, offices, prayers and meditations was compiled between the 13th century and the 15th century. Some of its texts are connected with Ely Priory, such as a metrical epitaph for Alan of Walsingham, prior of Ely (d. c. 1364). It also includes a story of the Virgin teaching a new Latin prayer, Missus est angelus, to a canon named Arnaud. The large puzzle initial below marks the beginning of a prayer to the patron saint of a church. 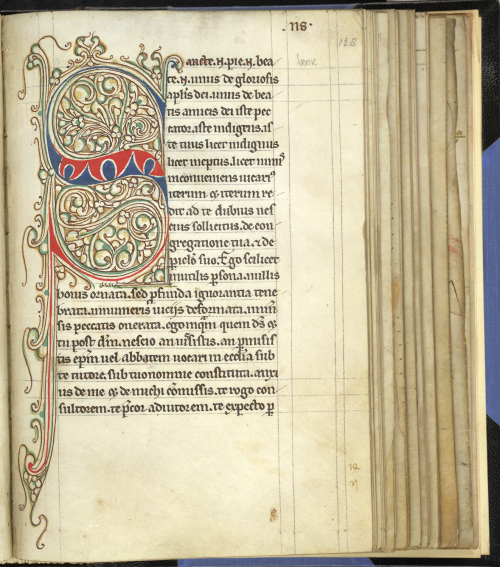