The Ascension in Anglo-Saxon England

Many fine examples of medieval art can be found in the pages of manuscripts. These illuminated books reflect the huge variety of artistic expression present in England and France during the early Middle Ages, as discussed in more detail on our new Medieval England and France, 700-1200 website. Biblical events provided the inspiration for many illustrations in these manuscripts, but medieval artists often interpreted these scenes in different ways. The Ascension of Christ was one biblical event whose representation changed in the course of the Middle Ages.

According to biblical accounts, Christ ascended to Heaven 40 days after his resurrection, leaving his disciples to continue his work on Earth (Luke 24:51; Acts 1:9-11). The event was frequently discussed in the writings of the Church Fathers, most notably St Augustine of Hippo (354–430), St Jerome (347–420) and other early Christian authors. It quickly became a significant feature in the Christian calendar, as one of the major feast-days celebrated in the course of the year, alongside Pentecost, Easter and Christmas. 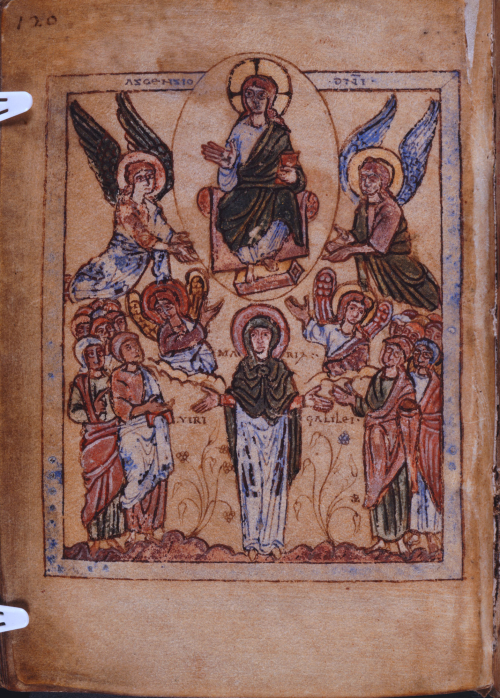 The Ascension of Christ, on an added leaf in the Galba Psalter, Reims (France), 1st quarter of the 9th century (additions England, 1st half of the 10th century): Cotton MS Galba A XVIII, f. 120v

Christ’s Ascension was a popular subject in early medieval art. There were at least three different ways of representing the scene in English manuscript illumination by the 11th century. One was to depict Christ in an almond-shaped frame in the sky (also known as a mandorla or aureola), supported by angels who carried him to Heaven. One illustrator adopted this design in an added page in the Galba Psalter, a book of Psalms reputedly given to the Anglo-Saxon King Æthelstan (reigned 924–939). Christ appears with a halo, enthroned in majesty, with angels on either side. He holds a book in one hand, while the other faces outwards to display his open palm and the wound left by the nail of the Crucifixion. The actual moment of Ascension has already taken place. Christ gazes at his disciples on earth, and appears much as in contemporary and later medieval images of the Last Judgement, where the focus is on the glory of his divinity.

Other depictions of the Ascension from the Anglo-Saxon period show a more active Christ, who climbs unaided across the clouds to reach Heaven. An illustration in the lavishly decorated Benedictional of St Æthelwold represents a bearded and radiant Christ in profile, walking through the air. His arm reaches up to the extended hand of the Father that descends from the frame above. The artist even managed to capture the movement in Christ’s clothes as he ascends, his robes fluttering, almost ruffled by the wind. 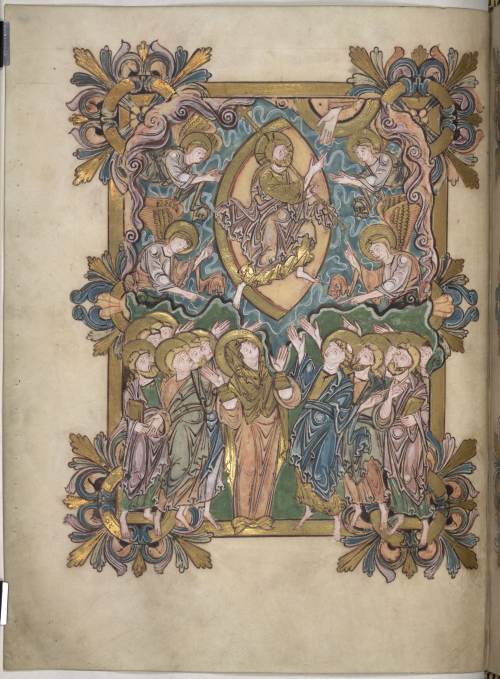 Around the turn of the first millennium, a new type of Ascension image developed from these artistic traditions, becoming a standard iconography in the decoration of liturgical and devotional manuscripts in England. Such images attempted to depict the exact moment that Christ vanished from the Earthly realm into the presence of God and to represent only the lower half of his ascending body, at the last moment of his human incarnation. This iconography is sometimes referred to as the ‘Disappearing Christ’.

One example is found in the 11th-century Caligula Troper, recently digitised for the British Library by The Polonsky Foundation England and France Project. The Troper is a liturgical manuscript that contains the text and notation for chants added to the mass on feast days (for the manuscript’s use and unusual provenance, see this earlier blogpost). It also includes a series of illustrations of English saints and the Apostles, and biblical stories such as the naming of John the Baptist and the Ascension itself. In its representation of the Ascension, Christ’s upper body disappears into the clouds and the frame of the image itself. His arms, head and face are hidden from our sight and the gaze of the disciples, with only his legs and bare feet visible. 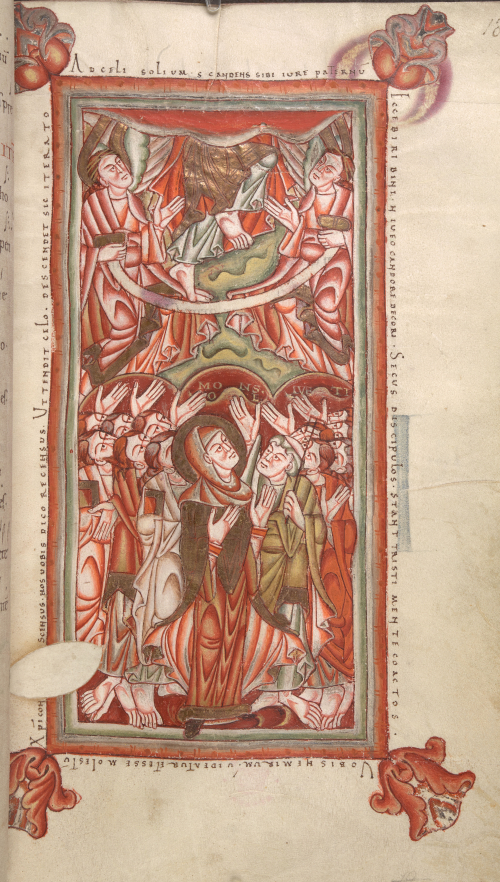 The Disappearing Christ from the Caligula Troper, England (Worcester?), 2nd half of the 11th century: Cotton MS Caligula A XIV, f. 18r

The iconography of the ‘Disappearing Christ’ may have been linked to an earlier exegetical tradition that maintained that Christ did not need help from Heaven in his ascent, but used his own divine power (Gregory the Great, Homilia 29; Bede, Homilia II.15). We notice that the celestial beings that appear on either side of the scene in the Caligula Troper do not carry Christ’s body. Instead, they raise their hands in adoration at his return, their heads craned upwards in much the same way as the watching disciples. The clouds offer Christ no support in his climb. They appear above his feet and he rises through them to Heaven.

The ‘Disappearing Christ’ motif also appears in the Tiberius Psalter, a late Anglo-Saxon manuscript that contains a series of illustrations from the Old and New Testament. In the Psalter’s representation of the Ascension, a notably independent Christ rises to Heaven. The artist has chosen to omit the company of angels, as well as the Hand of God and the mandorla, so that the focus is on Christ and his disciples. The caption at the top of the page is barely legible because of the damage the manuscript sustained in the Cotton library fire in 1731. The Latin reads Hic ascendit Christus ad caelos (Here Christ ascended to Heaven). Meanwhile in the centre, the artist introduces a new detail to the scene: Christ leaves behind a crown and an open book in the hands of his disciples, a signal to them to carry on his work and spread his teachings on earth. 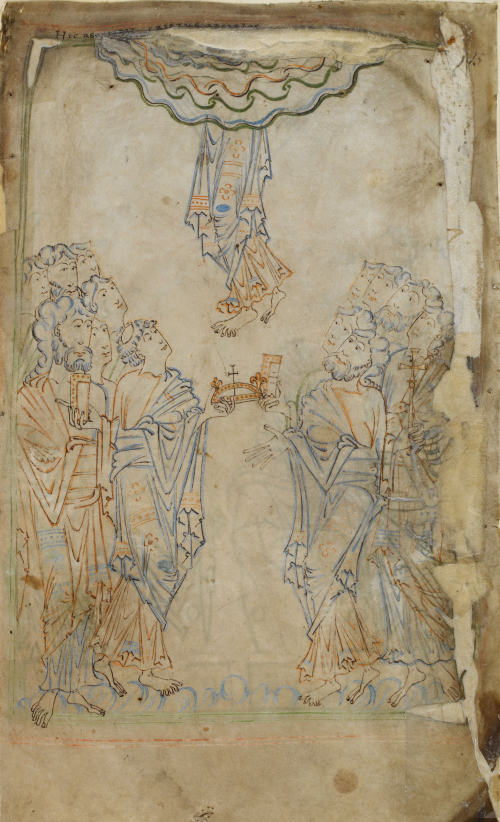 You can see all four of these manuscripts in person at the British Library’s Anglo-Saxon Kingdoms exhibition (on until 19 February 2019). Demand is high so we strongly recommend that you book your tickets in advance.

Posted by Ancient, Medieval, and Early Modern Manuscripts at 9:55 AM