The Southwark Hours: a new acquisition

The British Library is pleased to announce its recent acquisition of an illuminated medieval manuscript, the Southwark Hours, now Add MS 89309. It is now fully digitised and is on display in the Sir John Ritblat Treasures Gallery for all to admire. 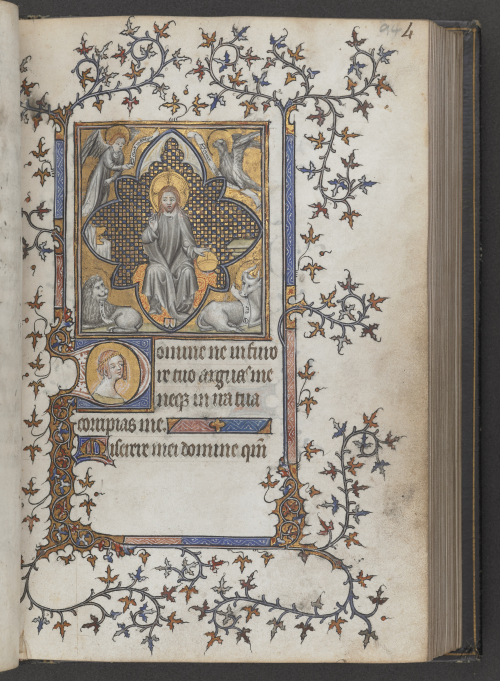 The manuscript is a Book of Hours, made in Paris in the last quarter of the 14th century. Books of Hours contained sets of prayers for reading at different ‘hours’ of the day and night. Spanning the divides of gender, age and status, they were the most popular books owned by laypeople in the late Middle Ages. The Southwark Hours is a particularly fine example. Its pages are festooned with ivy-leaf borders glittering with gold, and its major prayers are headed with delicate illuminations attributed to the ‘Ravenelle Master’. For its patron, most likely a French noblewoman, it would have been an invaluable aid to piety as well as a beautiful book. 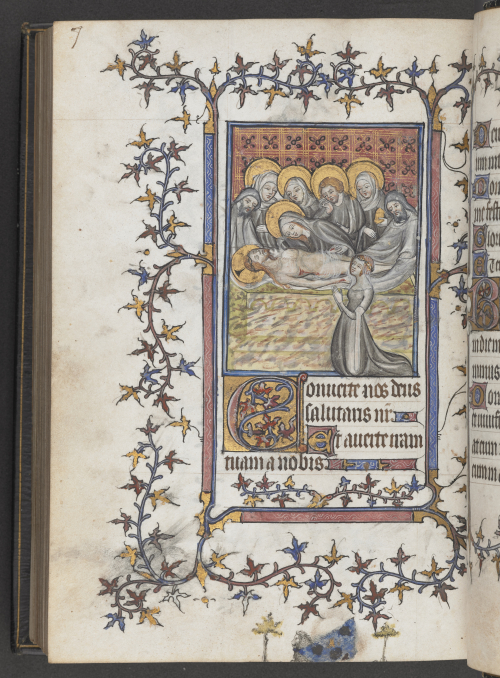 We can catch a glimpse of this mystery patroness within the manuscript’s pages. The prayer for the final hour of the day (Compline) in the set of prayers known as the Hours of the Passion is accompanied by an image of the Entombment of Christ. In the image, Christ’s dead body is laid out on his tomb by two pall-bearers, while the Virgin Mary, St John, St Mary Magdalene and two other holy women gather in mourning. The woman who kneels praying in the foreground is almost certainly a portrait of the manuscript’s original owner. Her insertion into the Passion scene evokes the intimate and emotional experience that she hoped to achieve through her prayers.

The head and shoulders of the same woman also appear within a decorated initial at the opening of the Penitential Psalms, beneath a miniature of Christ in Majesty (f. 94r), pictured above. She gazes at the words from Psalm 6: ‘Domine ne in furore tuo arguas me neque in ira tua corripias me’ (O Lord, rebuke me not in thy indignation, nor chastise me in thy wrath), while the illuminated figure of Christ looks down at her. 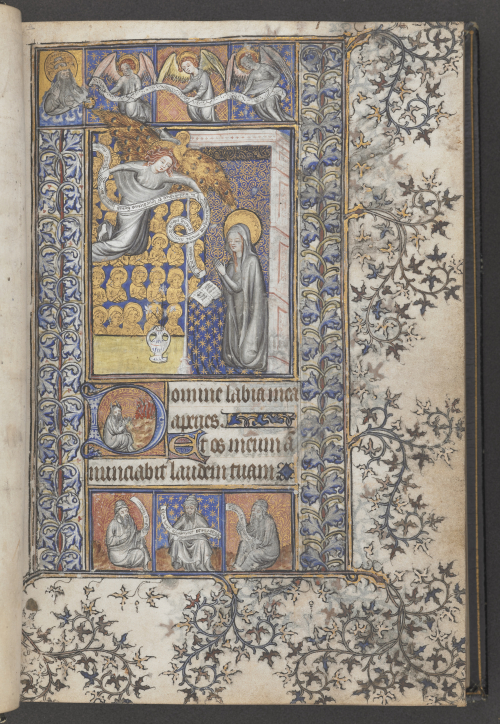 The most impressive page in a Book of Hours is usually the opening prayer for the first hour of the day (Matins) in the Hours of the Virgin — a series of prayers addressed to the Virgin Mary that were central to any Book of Hours. True to tradition, the Southwark Hours opens this prayer with an exquisite illumination of the Annunciation.

It is apparent that before the arrival of the angel, the Virgin Mary had been reading studiously. Looking closely, we can read her open book, ‘Ecce virgo concipiet et pariet filium’ (Behold a virgin shall conceive, and bear a son; Isaiah 7:14), and so discover that she is studying the Old Testament text that prophesies about her own important role in salvation history. She kneels on a sumptuous blue cloth patterned with golden stars, recalling her epithet as ‘Stella Maris’ (star of the sea). The vase of lilies in front of her symbolises virginity.

In contrast with the Virgin Mary’s serene stillness, the angel Gabriel makes a dramatic entrance from the upper left. One foot trails out of frame and one peacock-feather wing projects in front of the frame, giving the impression of immediacy and movement. Gabriel’s gracefully looping scroll bears the prayer ‘Ave Maria’ (Hail Mary; based on Luke 1:28 and 42). Meanwhile, God the Father presides in the upper corner and the dove of the Holy Spirit descends. The scroll of musical notation carried by the three angels in the upper border encourages us to imagine divine music accompanying the scene, while the scroll-bearing prophets in the lower margin prefigure this momentous event. 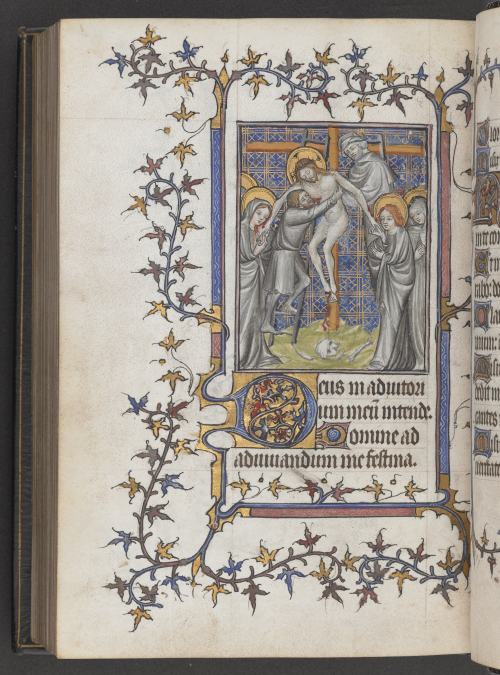 The manuscript formerly was on long-term loan from the Roman Catholic Archdiocese of Southwark (Loan MS 85/4). Mgr Matthew Dickens, the Vicar General & Chancellor & Trustee of the Archdiocese of Southwark, commented: ‘We are delighted that the British Library has been able to acquire for its permanent collection the Southwark Book of Hours. This is a particularly fine example of illuminated manuscripts of this period and it is right and proper that it should be held in a major national collection, to be enjoyed by the public and to be available for scholarly research. I should like to thank the British Library staff and donors who have made this acquisition possible.’

Dr Kathleen Doyle, the British Library’s Lead Curator of Illuminated Manuscripts, said: ‘I am delighted that the Southwark Hours is joining the Library's remarkable collection of illuminated manuscripts, including treasures of French illumination and Books of Hours from across Europe.  The manuscript is an important witness of the Ravenelle Painter’s work, and one of only two that indicates that the he worked for aristocratic female patrons.’ We are grateful to the Friends of the British Library for their assistance in funding this acquisition.

The manuscript is now on display in the Sir John Ritblat Treasures Gallery at the British Library, together with another manuscript (Add MS 35215) and two printed Books of Hours, to allow visitors to compare the similarities and differences between the same text in different media.