In early modern England, the business of government produced a lot of paper. Flurries of notes, memoranda, bills and reports regularly passed through many different hands. Once they had been read, they also needed to be preserved and filed away for future reference. In April 1592, the administrator Nicholas Faunt (1553/4–1608) noted that letters and documents ‘dayly come in of all sortes’, and that care should be taken, since ‘greate inconveniences may growe through the losse of papers and unorderlie keepinge of them’. 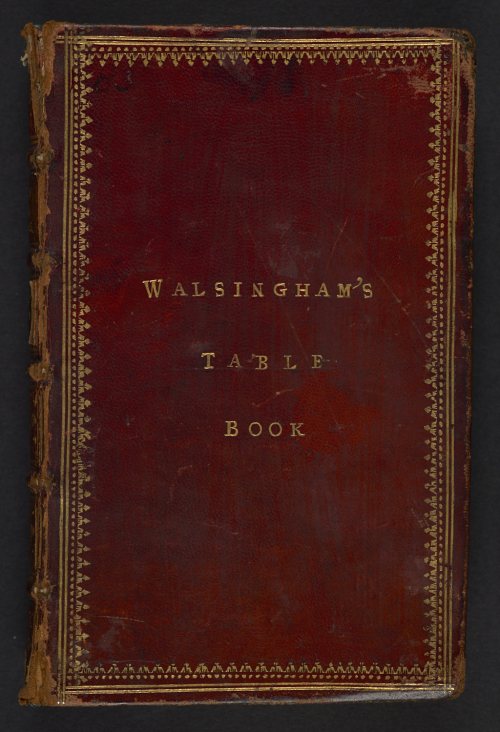 One manuscript in the Stowe collection shows how Sir Francis Walsingham (c. 1532–1590), Principal Secretary of State, organised this daily deluge of paper. Stowe MS 162, also known as ‘Walsingham’s Table Book’, is an inventory of the statesman’s own personal archive. The volume, which is in the handwriting of Walsingham’s secretary, Thomas Lake (d. 1630), records where and how each document was stored, for easy location and retrieval. As the head of a network of Elizabethan ‘intelligencers’, Walsingham depended on up-to-date information, so the accurate management of his memoranda, letters and reports was essential. 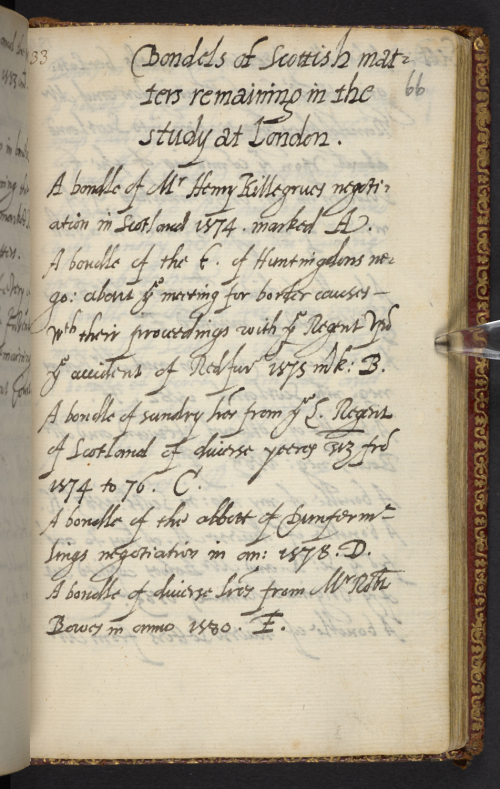 Walsingham categorised his files into three subjects: foreign matters; home matters; and the catch-all heading, ‘diverse matters’. Within ‘home matters’, for instance, we find papers concerning ‘Forts and Castles’, ‘Piracy’, ‘Recusants’, and ‘Religion and Matters Ecclesiastical’. Documents on these subjects were assembled into bound books compiled by Walsingham’s secretaries, or gathered as loose papers into portable bundles, parcels or bags, often indexed using a letter of the alphabet. 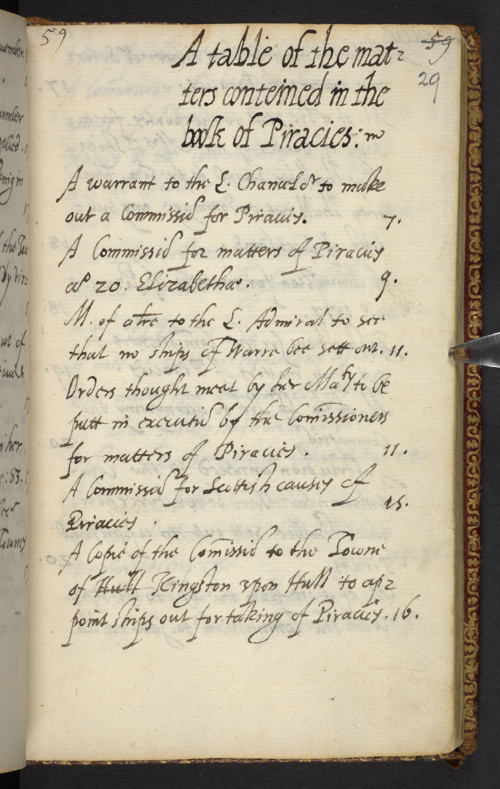 Walsingham’s collection of documents was in regular use. Some items were kept ‘in the Chests’, or ‘Remaining at the Courte upon the Shelfe’ in Whitehall, while others were held ‘in the study at London’, in Walsingham’s house on Seething Lane. When new documents arrived, the table book was updated. It was also used to keep track of loans, recording for example that Sir Robert Cecil, who succeeded Walsingham as Secretary of State, consulted in 1596 a volume on Ireland titled ‘a book of Plotts and discourses’. 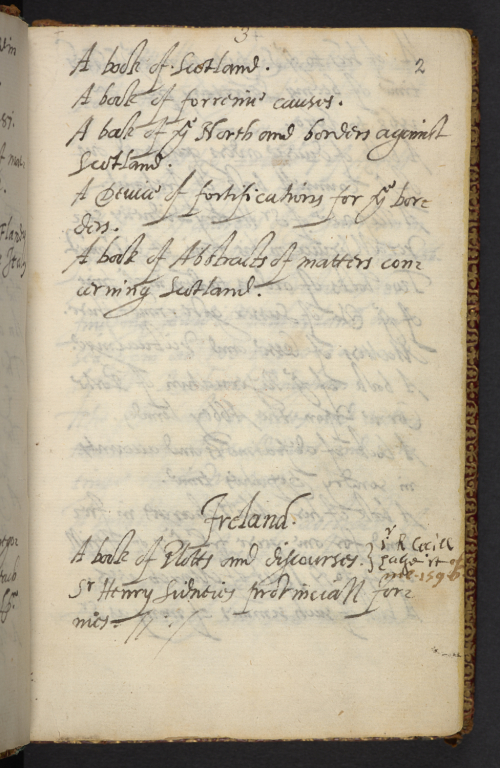 A note recording the borrowing of a volume by Robert Cecil: Stowe MS 162, f. 2r

When Walsingham died, the volumes from his neatly indexed archive passed into many different hands. One of these volumes may have been Lansdowne MS 146, a compilation of papers titled ‘Matters of Piracies’. According to the table book, Walsingham’s ‘book of Piracies’ was made up of 25 documents, including a copy of a commission to allow Kingston upon Hull to ‘appoint shipps out for taking of Piracies’, and a ‘proclamation against the maintenance of Pirats’. The contents of Lansdowne MS 146 correspond exactly with the ‘table of the matters conteined in the book of Piracies’ described in the table book. Although the table book can no longer tell us the whereabouts of a given document, it can still offer clues to material that may once have belonged to this Elizabethan statesman. 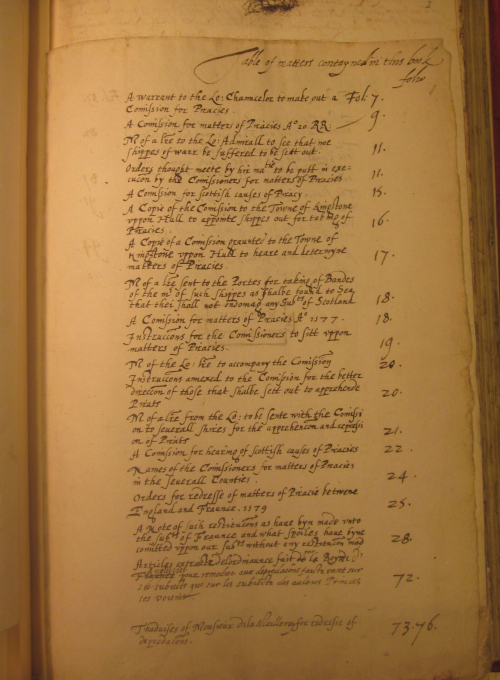 The contents of the Matters of Piracies: Lansdowne MS 146, f. 1r

Walsingham’s table book offers one solution to the perennial problem of keeping up with the latest information. Using this finding aid, the Principal Secretary of State could amass a comprehensive and carefully organised archive of papers that was accessible, up-to-date and accurate. Although Walsingham’s boxes and bundles no longer remain, Stowe MS 162 offers a glimpse of how one statesman organised and navigated the copious papers that shaped the Elizabethan government.