Through the looking glass

If you came to our Anglo-Saxon Kingdoms exhibition, you may have seen the Guthlac Roll, made in the late 12th or early 13th century. Look here and you'll notice that two figures in this roll seem to be wearing spectacles. It is very unlikely that these spectacles were part of the original design: exploring how spectacles are represented in medieval manuscripts suggests that both they and the plume rising from the seated figure's cap were added in the early modern period. 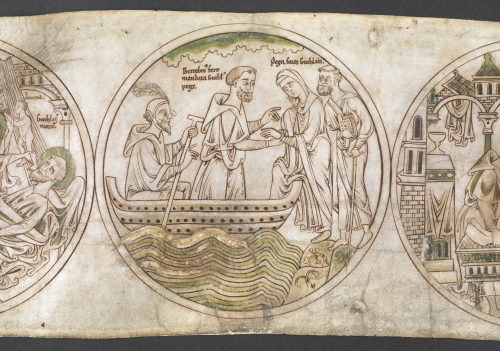 One of the first concrete references to spectacles dates from the early 14th century. On 23 February 1305, Giordano da Rivalto, a Dominican friar from Pisa, delivered a sermon that partly celebrated the ingenuity of mankind. Giordano stated, ‘It is not yet twenty years since there was found the art of making spectacles (Italian: occhiali)'. Although it is doubtful that spectacles were invented in a single eureka moment, Giordano’s bold claim suggests that spectacles were certainly in use in some areas from the late 13th century.

The earliest surviving artistic depictions of spectacles date to the 14th and 15th centuries. This 15th-century Book of Hours, produced in northern Italy, includes a detail of monks singing a requiem, with one member of the group wearing spectacles. 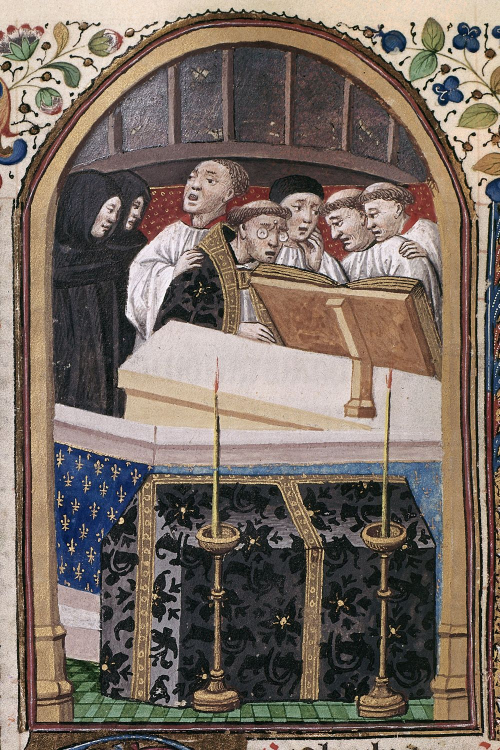 Detail of a miniature of monks singing a requiem, with the celebrant wearing spectacles, at the beginning of the Office of the Dead: Harley MS 2971 f. 109v

An extremely clear illustration of spectacles can be found in another 15th-century Book of Hours, produced in central France, perhaps Tours. In this image, St Mark holds spectacles to his eyes as he reads a book, while his evangelist symbol, the lion, looks on eagerly from the side. 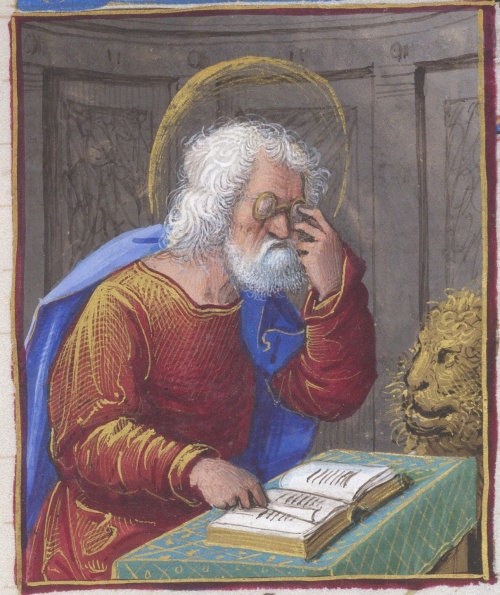 Detail of a miniature of Mark reading a book and holding spectacles to his eyes: Yates Thompson MS 5, f. 12r

Ancient and medieval texts, many of them pre-dating the surviving artistic depictions, also occasionally refer to transparent materials being used as visual aids. One of the earliest descriptions is found in Pliny the Elder’s Natural History, completed shortly before his death in AD 79. Pliny shared an anecdote recalling how the emperor Nero used to watch gladiator fights with the assistance of a mineral called a smaragdus. According to Pliny, a smaragdus could be concave to ‘concentrate the vision’ or laid flat to ‘reflect objects just as mirrors do’. It is unclear whether Pliny thought that Nero used the smaragdus as a reflective device or to enhance his vision. Pliny also described how a smaragdus was a green mineral, perhaps emerald, malachite or the green varieties of jasper. It is certainly tempting to suggest that Nero used emeralds to enhance his view of the gladiators. 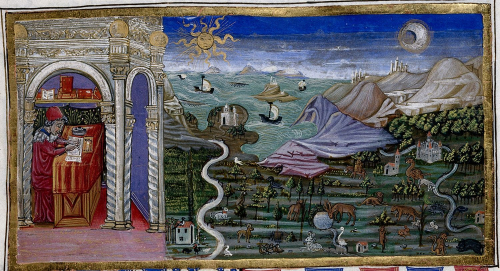 Detail of a miniature in colours and gold showing Pliny writing in his study and a landscape with animals, rivers, the sea, Sun and Moon: Harley MS 2677, f. 1r

In some early texts, scholars explained the scientific principles behind the use of corrective lenses. In the 2nd century, Ptolemy wrote on the topic in his Optics. Two Arabic authors from the 10th and 11th centuries, Ibn Sahl and Alhazen, later expanded on Ptolemy’s explanation. The English friar Roger Bacon also addressed the topic in his Opus Majus (c. 1266), during his time in Paris.

Robert Grosseteste also described the process in his De Iride (‘On the Rainbow’), composed between 1220 and 1235. Grosseteste described how ‘we can make objects at very long distance appear at very close distance’, perhaps describing an early telescope. Grosseteste further remarked how lenses could make small things larger when observing them at close distances, so that it is ‘possible for us to read the smallest letters at incredible distance, or count the sand, or grain, or grass, or anything else so minute’. 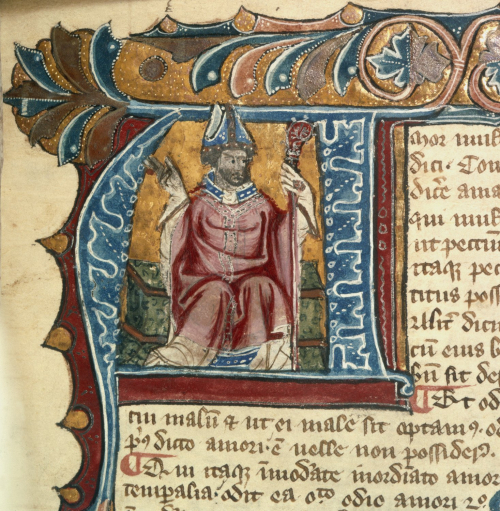 Perhaps the lenses described by these authors were more akin to modern magnifying glasses rather than spectacles. A 15th-century French translation of Vincent of Beauvais’s Le Miroir Historial contains a possible depiction of such a lens. This manuscript detail depicts Vincent of Beauvais, sitting at a desk and writing his book. It is possible that the glass object in the background was intended to be a kind of lens that may have been used as a reading aid. Of course, it is also possible that this shows a mirror, in reference to the title of the text, rather than a magnifying lens. 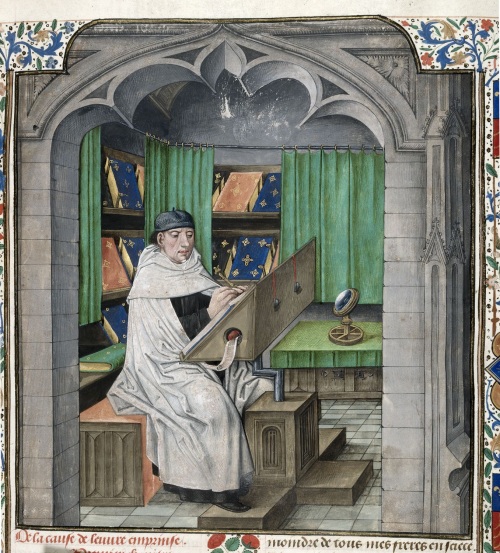 Detail of a miniature of Vincent of Beauvais sitting at a desk and writing his book: Royal MS 14 E I, f. 3r

We might not know exactly when the spectacles were added to the Guthlac Roll, but the history of medieval spectacles is certainly looking a little clearer …